Tim Wilkerson won a round at each of the season’s first two races and can't wait to return to the trick with a new Levi, Ray and Shoup Funny Car.This is one of a series of interviews with the top drivers in Top Fuel, Funny Car, and Pro Stock.
10 Jun 2020
NHRA National Dragster staff
Return to Racing

Early-season report card: Wilk won a round at each of the season’s first two races, qualifying ninth in Pomona with a 3.918 and then beating former world champ J.R. Todd in round one with a season-best 3.879 before smoking the tires against Matt Hagan in round two. After qualifying No. 7 in Phoenix with a 3.889 he ran 3.879 to beat Alexis DeJoria in round one then red-lighted away a 3.88 to John Force in round two. 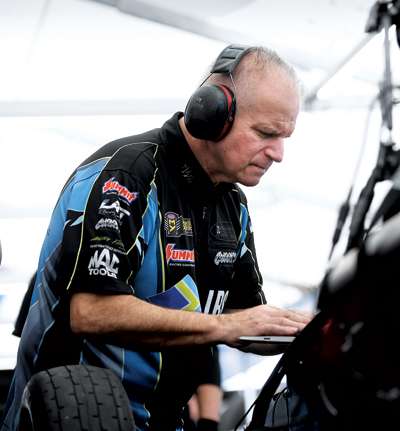 Looking back: “I was pretty happy with the first two races; I mean, we’re no Jack Beckman but we’ve got a good car. We started the year with some different parts that I was still trying to learn and so I’m kind of sneaking up on it, but I’m pretty happy with it really. We were hoping to be lower in the .80s. On that red-light, I don’t know if it was something I did something funky or what, but I timed it out with my video and it should have been right on top of a perfect light, so it very well could have been a red-light.”

Looking ahead: “The red-light run was a good run and would have beaten everyone but Tommy Johnson that round so I’m pretty optimistic. We’re just trying to learn how to run the thing without tearing it up; my goal this year is to be more consistent and not smoke the tires.”

Shop talk: With sponsor Levi, Ray, and Shoup’s 50th-anniversary celebration ending in July before the return to racing, Wilkerson will replace that popular scheme with a new one that he’s pretty excited about. “It’s bitchen,” he enthused. “Wait ‘til you see it. It’s really cool.”

The final word: “I haven’t gone this far in my life without racing for this many days; I might not even know how to start it let alone tune it, but I hope so. I’m not worried about the driving; it’ll be just like falling off my bicycle. This new schedule will separate the men from the boys and girls. I’m excited about it. I’m pretty pumped if you wanna know the truth. I don’t think they’re ready for my attitude. It’s gonna be fun. We’re going to wear them out if we do 15 or 16 in a row, guaranteed. We’re getting all of our junk in a pile right now; I’ve got every motor and every cylinder head I own; we’re gonna be ready.”