John Force: 'I’ll be ready. I know the car. I could drive it with my eyes closed'

Sixteen-time world champ John Force and new crew chief Danny Hood find themselves in third place after two strong outings to launch the season and perhaps higher if not for that pesky Jack Beckman guy. This is one of a series of interviews with the top drivers in Top Fuel, Funny Car, and Pro Stock.
05 Jun 2020
NHRA National Dragster staff
Return to Racing 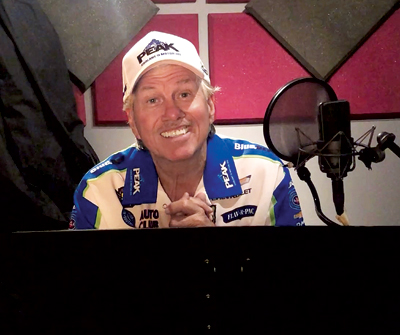 Early-season report card: The 16-time world champ and new crew chief Danny Hood find themselves in third place after two strong outings to launch the season and perhaps higher if not for that pesky Jack Beckman guy. After qualifying fifth in Pomona with a 3.889, Force mowed down Bob Bode, Tommy Johnson Jr., and Matt Hagan before losing a tough one in the final to Beckman, 3.83 to 3.89. The Peak Chevy was red-hot in Phoenix with a qualifying best of 3.861 for the No. 2 spot then a season-best pass of 3.848 in round one against Terry Haddock. He followed a 3.89 victory over Tim Wilkerson with a 3.917 in the semifinals that wasn’t good enough to get around nemesis Beckman.

Looking back: “I feel good about where it started and with new blood from Danny; he’s doing a great job. Our combinations are all the same; we inherited [2019 crew chief Brian] Corradi’s tune-up and he inherited part of ours and they change continually as we try to upgrade and make them apply to different tracks. I just want to get back into the game. We’re gonna be good. We’re gonna be fast. Even though it’s only been two months, it seems like it’s been forever, but I’ll be ready. I know the car. I could drive it with my eyes closed. I’m just trying to stay in the game, stay in the fight. I’ve been living it since the day I got off the plane coming home from trying to get to Gainesville.”

Looking ahead: “We’re up there in the top of the points but it’s early yet; a lot of people are testing, doing things to move and find a better mousetrap. I got on Nutrisystem and it’s really working for me and I’m staying in the gym. I’m trying to lose 20 pounds so it’s going to help my car to be lighter and they can move weight around on the car. I’m past halfway; I’ve lost 14 pounds and I’m trying to keep going. It ain’t nothing great; tell the fans I’ve still got my beer belly and I’m still that truck driver they fell in love with -– don’t quit me now.” 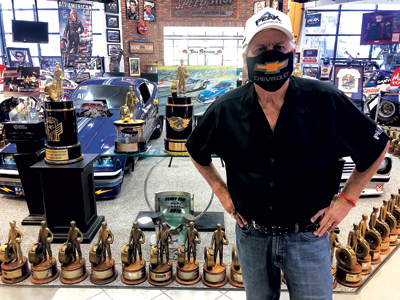 Shop talk: “We’re not working on race cars right now; the race cars are loaded and ready to go. We’re trying to build inventory for the 16 -week run and that is to build blowers, blocks, cylinder heads, and clutches.”

The final word: “I never realized how much I’d miss it until we couldn’t do it, but I’ve also enjoyed getting to spend more time with my family than I have in 40 years. I want to say to the people to try to keep that going with your family even after this time. You’ve got it, utilize it –- don’t just sit around and worry like I do. I also just want everybody to stay healthy and say thank you to all the first responders and the hospitals and what those people are doing. God bless them. Don’t ever lose hope and let’s just stay positive.”