Bob Tasca III: 'Trust me, this Motorcraft car is going to have its day in the sun'

The season did not start well for the Tasca Racing team with just one round win in the year's first two events, but the veteran Funny Car driver knows that his team is set up for more success like it enjoyed in 2019. This is one of a series of interviews with the top drivers in Top Fuel, Funny Car, and Pro Stock.
06 Jun 2020
NHRA National Dragster staff
Return to Racing

Early-season report card: The Winternationals did not start well for the Tasca team, which split a Mustang body in a big blower explosion on the first qualifying pass. They ultimately qualified 10th with a 3.940 best but smoked the tires at the hit in round one against Ron Capps. Phoenix was much better as they grabbed the No. 5 spot in qualifying with a 3.883. Tasca outpedaled Blake Alexander in round one but then red-lighted away a 3.91 against eventual race winner Tommy Johnson Jr.’s 3.86 in round two.

Looking back: “We were a little behind the 8 ball in testing and we just really didn’t catch our stride; it just was not the race car that I know Mike Neff and Jon Schaffer expected, We hurt a body pretty bad in Pomona and then in Phoenix we smoked the tires and I pedaled it, saved it, then we’re going against Tommy and that thing was set on kill from Friday morning so I knew I had to press hard. I wouldn’t have won anyway –- he outran me by a bunch -– but I’m an aggressive guy and I’m gonna go for it. I’ve done it many times in my career and have won more than I’ve lost.” 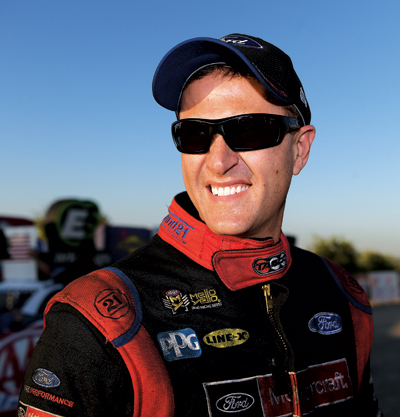 Looking ahead: “We stayed and tested Monday after the Phoenix race and we made one monster run after the next. We ran .89 and then we came back and ran .87 in the heat on a 112-degree track, and those are the quickest runs out there of all the cars running that day; that was the best test session I think I’ve ever had in my career and we couldn’t get to Gainesville fast enough. It’s certainly not the first two races that we wanted but it’s just the first two not the first 20, and then after having a test session making some of the best temperature-adjusted ones I probably have ever made in my career, I’m very confident, very optimistic.”

Shop talk: “Since Phoenix, we haven’t even cleaned the race car. It’s where we want it -– the clutch program, the blower program, and a lot of little things that Mike and John tweaked over the offseason finally came full circle in Phoenix. We’re finishing up two bodies so we will have six race-ready bodies, not because we need them all but we won’t have time to fix one if we hurt one. We’re doing a lot of logistics and planning for the schedule ahead.”

The final word: “The first three weeks, I all I thought about was how to survive this pandemic and now that we’re starting to see a light at the end of the tunnel, all I’ve been thinking about is, ‘When do we go back racing?’ I just can’t wait to get back out and race. I’ve got Mike Neff and Jon Schaffer and some really talented crew guys so, trust me, this Motorcraft car is going to have its day in the sun. It’s early, early, early in the year even though it’s late on the calendar. I’m feeling pretty good about getting back out there.”