Paul Lee: 'It’s going to be great just to see our friends and the fans'

In their debut with new sponsor Global Electronic Technology, Paul Lee and crew chiefs Jim Oberhofer and Donnie Bender qualified impressively in Pomona but fought a series of bad breaks through the season's first two events. This is the final article in a series of interviews with the top drivers in Top Fuel, Funny Car, and Pro Stock.
12 Jun 2020
NHRA National Dragster staff
Return to Racing 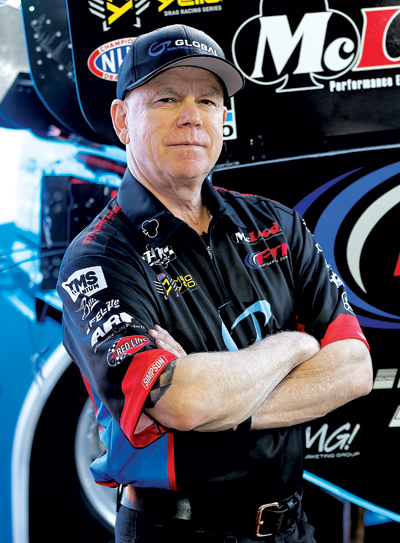 Early-season report card: In his debut with new sponsor Global Electronic Technology, Lee and crew chiefs Jim Oberhofer and Donnie Bender qualified an impressive sixth but backfired the blower while leading Alexis DeJoria in round one. In Phoenix, the team qualified just No. 13 with a 4.25 but made his best pass of the year on Sunday with a 3.89 in a losing effort to eventual race winner Tommy Johnson Jr.

Looking back: “We were trying to run 3.84 or 3.85 in that first round in Pomona, and it was on a career-best pass when it blew. We were winning the race and pulling away and it broke an intake valve; just a freak thing. We didn’t qualify well in Phoenix and just got outrun in the first round.”

Looking ahead: Even though we lost first round both races, we’re still No. 10 [in points] so it’ll be nice to go out there and just do like the old way without the Countdown. I’m more excited about that than anything, so I can go just go race at not worry about making the Countdown. If we do good, we’ll just keep racing. For a small team like us, having to only make two qualifying runs, it’s going to allow us to make more races. We didn’t plan on racing all the races but now –- depending on what the schedule looks like and, with the two-day races, we’re going to be able to afford to race more -– we’ll do as many as we can do.

Shop talk: “We run out of the DSR shop, which was closed for a while, but Donnie had been working on stuff in his home shop and he got the body fixed that we hurt in Pomona. At home. I’m actually busy with McLeod and FTI. It’s pretty much business as usual; sales have been really good. McLeod is mostly in the street market and people are buying parts for their projects because they’re cooped up at home and working on their cars while they›re quarantined and FTI is mostly the bracket racing crowd and those guys started racing already, so we’ve been pretty fortunate.”

The final word: “I’m happy with the car and our team and car wants to run 3.85, so whenever we get back out there, we’re ready to race. We’re looking forward to getting back to racing and not just the racing part. It’s going to be great just to see our friends and the fans. We’re excited to go back.”