Erica Enders: 'Our great start proves the organization’s hard work is paying off'

Three-time Pro Stock world champ Erica Enders had a great start to the 2020 season and is eager to get back to racing with her Chevy Camaro. This is one of a series of interviews with the top drivers in Top Fuel, Funny Car, and Pro Stock.
01 Jun 2020
NHRA National Dragster staff
Return to Racing 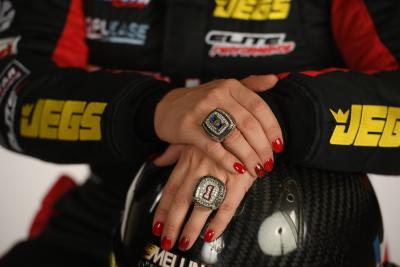 Early-season report card: Erica Enders and Elite Motorsports came out swinging at the beginning of the season. Jeg Coughlin Jr. had a dominating performance in Pomona and Enders qualified third. On Sunday morning of the Winternationals, they were on opposite sides of the ladder with a potential to meet in the finals. When Enders’ car shook in the semis against Jason Line, that left her teammate Jeg Coughlin Jr to dispatch the last KB Racing car in the final.

In Phoenix, Enders and Coughlin seemingly swapped roles from Pomona. Enders moved up one qualifying spot with her 6.554-second run to be No. 2 behind Coughlin. On Sunday, it was her turn to defeat Line in the semi’s with her 6.555 to Line’s 6.588, before taking on and besting Bo Butner for the Wally.

Looking back: “So we had a really great start to the year for our whole organization, which proves that our hard work is paying off. Having said that, I believe that in Phoenix the KB Racing team struggled a little bit. When they came to Orlando (for the World Doorslammer Nationals), their struggles were behind them. So, it’s just going to be a battle; it’s always a battle, between Elite and KB.”

Looking ahead: “It’s funny, when you’re on the road the whole time and you’re like, ‘Man, what I wouldn’t give for a couple weeks off.’ And now we’re like – let’s go. We have a simulator in the shop. I sit in my race car. But nothing – nothing – compares to on-track practice. We plan to head to Tulsa in the next couple of weeks to do some testing with what we’ve found in the engine shop and just get back in the seat.” 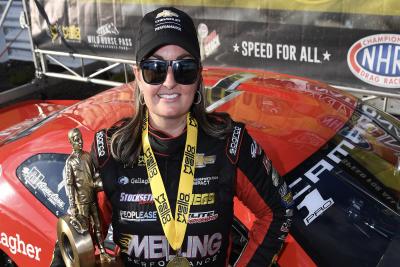 Shop talk: “The cars have been ready to go for weeks now because they were in Gainesville and ready to race. We came back to the shop, took everything apart, and inventoried the trailers. My Melling Performance team got a new truck and trailer – it’s an awesome rig – so we’ve been switching all of that stuff over. Hard work has been going on at Elite Performance’s engine shop, trying to develop our intake manifolds and find more horsepower with our engine programs. That has not stopped. We all know [Elite Motorsports owner] Richard Freeman enough to know that not even COVID-19 was going to get in the way of progress from his small town in Oklahoma.”

The final word: “This is the longest period of time any driver has been out of the seat – I know myself, for sure. This is longer than any off-season. Usually we’re off in December, but by January we are in Florida testing for the whole month before we head out West to test in Phoenix before Pomona. The longest we’re out of the seat is four, maybe six weeks. This has been an incredibly lengthy time to be out of the cockpit. At least we are all in the same boat. We’re all going to have to knock the rust off. But I’m ready for it.”