Doug Kalitta: 'We’re all just really hungry and ready to make it happen'

After missing out on the 2019 Top Fuel championship, Doug Kalitta and the Mac Tools team rebounded with a strong start to 2020 and lead the points after two races. What's ahead for the team and what have they been up to? This is one of a series of interviews with the top drivers in Top Fuel, Funny Car, and Pro Stock.
04 Jun 2020
NHRA National Dragster staff
Return to Racing

Early-season report card: After just missing out on the championship (again) last season, Kalitta and crew chiefs Troy Fasching and Rob Flynn came firing out of the box in Pomona. After qualifying fifth, Kalitta sat down Brandon Welch, Justin Ashley, Brittany Force, and, in the final, Austin Prock for his 48th career win, capping it with a pair of 3.6-second passes in the final two rounds. After qualifying eighth in Phoenix, he beat Shawn Reed, Force again, and Antron Brown (with a season-best 3.672) before hazing the tires against Steve Torrence in a losing final-round effort.

Looking back: “We hit the ground running for sure. We tested at Vegas with half a dozen different things because we’re always trying to squeeze a little more out of these cars. We’ve been trying to run consistently in the .60s without blowing it up; obviously, it was a learning curve to get to this point and we still have a ways to go, but it was very refreshing to see that we can run in the .60s and that it can repeat and live. We ran really good in Phoenix, too, but just pushed it too much in the final.” 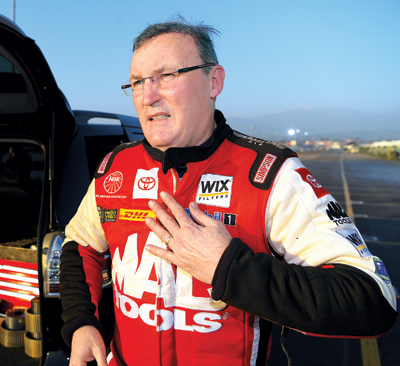 Looking ahead: “We were able to start strong and everybody is champing at the bit to get going again. Troy and Rob are figuring it out and we just need to keep at it. I’ve been doing some iRacing, so I’m getting all kinds of seat time. I’m doing mostly the dirt stuff for an hour a day; I’m just not going straight, but seat time is seat time. I’ve also been on the practice Tree staying sharp so we’re where we need to be. We’re all just really hungry and ready to make it happen. Obviously, Steve [Torrence] ran really good in Phoenix so we’re going to have to keep our heads down and run hard.”

Shop talk: “There’s not a lot going on with the car, so we’re trying to get organized to be able to run a bunch of consecutive races. I think our inventory is pretty good. We’ve done some landscaping and some painting inside the shop and Chad [Head, team manager] is finding different projects for the guys. A lot of the team guys are working for us on the airplane side, building parts, fixing vehicles, working on engine stuff; we have all kinds of work around here so it’s really nice having the extra help because we usually run pretty lean. To have 20 guys to help has been great.”

The final word: “We’re all looking forward to going racing again. Since I fly my own planes, it’s easy to get to and from the races but we need to get these passenger companies running again so we can get all our crew guys and everyone else that normally flies commercial in and out. The whole system needs to get turned back for everyone who helps make these races run.”