This year’s Chevrolet Performance U.S. Nationals is the 62nd edition of the race that began NHRA’s national event system, and while most of those events have been held in Indianapolis, the U.S. Nationals did not start there. Indy is the fifth venue at which the event was held. The first race, then simply known as the Nationals, was contested in Great Bend, Kan., in 1955. The event moved to Kansas City, Mo., the following year, then to Oklahoma City for two years and Detroit for another two before moving to Indy. As we gear up for another Big Go, this week’s Throwback looks at the drivers who prevailed at the non-Indy Nationals. 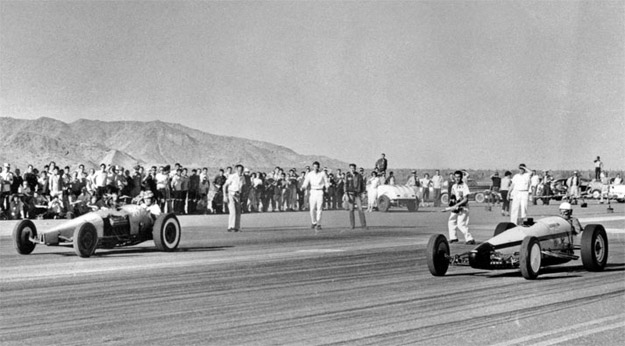 Calvin Rice, near lane, became NHRA’s first champion when he outlasted Fritz Voight at the inaugural event in 1955. Though the event was slated to run in its entirety in Great Bend, Mother Nature had other plans with the worst rainstorm in 30 years hitting the area on Saturday night, washing out Sunday’s competition and pushing the final three rounds to Phoenix a couple weeks later.

In Phoenix, Rice and Voight worked their way through eliminations to meet up in the final (pictured). It took the pair four tries to get the title round in with three foul starts waving off the first three attempts. On the third try, both drivers jumped the flag start, and Rice’s transmission blew. Because the race had already been waved off by starter Paul Wallace as another “no-go,” Voight could not claim the trophy by default. Officials gave Rice and his crew, led by Chuck Webster and Mel Dodd, 30 minutes to repair their entry. The team leapt into action, bolting in a new transmission, which didn’t fit. A reworked Ford tranny was bolted in, and the team just made it to the line in time, not even having time to adjust the clutch linkage. Rice had to scoot down deep into the seat and work the clutch with the tip of his toe to make the shift in the final, in which the 25-year-old California resident ran a 10.30 at 141.95 mph to defeat Voight. 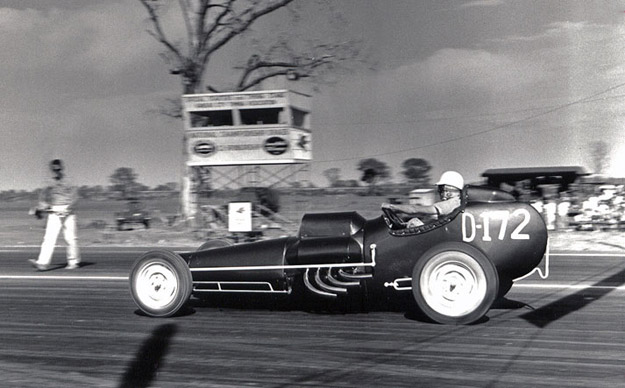 The Nationals moved from Great Bend, a venue that the event had outgrown, to Kansas City in 1956, and the date also switched from late September/early October to the now traditional Labor Day weekend, running Aug. 31 through Sept. 3. Reigning national champ Calvin Rice made the official ribbon-cutting run in a stunning 9.99 seconds, a time that was not bettered during the course of the meet. However, when all was said and done, it was Melvin Heath who came out on top. Heath, a known holeshot artist, clocked a 10.49 to defeat Don Little in the final and lay claim to the second NHRA championship trophy. 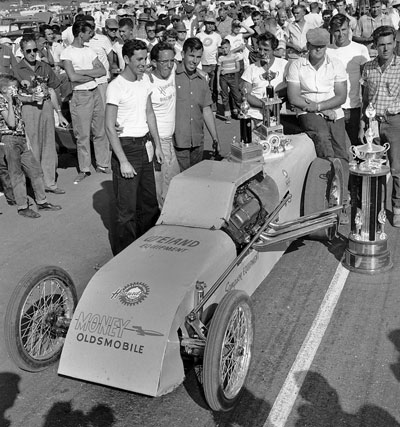 The Nationals moved to its third different location in 1957, being contested in Oklahoma City’s spacious State Fairgrounds that featured ample paved pit areas, separate spectator and participant parking, a cafeteria, and more. Despite the newly instituted fuel ban, the event still drew 450 entrants, including Buddy Sampson, who took top honors at the event, which was again held over Labor Day weekend. Sampson drove the 462-inch Olds-powered, aluminum-bodied Money Oldsmobile Special past LeRoy Mackey in the final, clocking a 10.42, low e.t. of the meet, en route to victory. 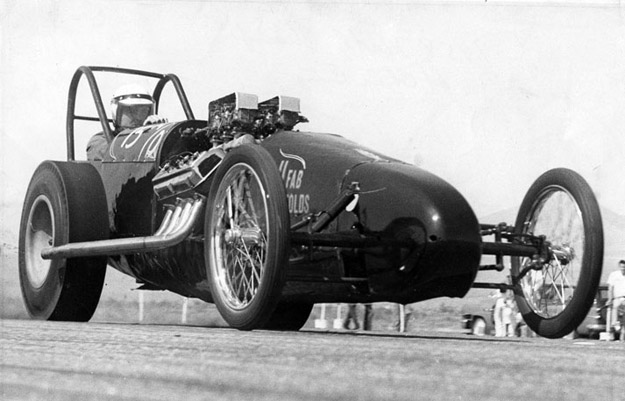 Oklahoma City was once again the location for the Nationals in 1958, and the event was so popular that entries had to be limited to 500, a number reached a month before the race’s start. The 1958 event also featured two eliminator categories with Little Eliminator, which pitted the winners of the A through E Gas classes against one another, being added to the rotation. Junior Thompson was the winner. However, the big draw was Top Eliminator once again, and Ted Cyr was the big winner. Cyr’s win was an interesting one because of the somewhat quirky path that led to the victory. Cyr and partner Bill Hopper brought two entries — a new lightweight nine-second entry, painted orange and powered by a GMC-supercharged Chrysler-powered machine, and their old, reliable Isky Cams-sponsored unblown Chrysler dragster, painted blue with shoe-polished “For Sale” lettered on the nose and driver cowling — to the event, and Cyr drove both. The orange car was considered the primary entry for the team, and though the blue entry was officially entered as well, it was considered spare parts. Both entries advanced to the semifinals in A Dragster, but Cyr was only able to wheel the blue one to the final. Cyr defeated Jay Cheatham in that title round and earned the right to face the winners of the next five fastest classes for the Top Eliminator championship. After working through the first couple of rounds, Cyr faced B Dragster winner Albert Ishenbaugh in the Top Eliminator final. Cyr powered to a 10.04 to defeat Ishenbaugh and win the title. 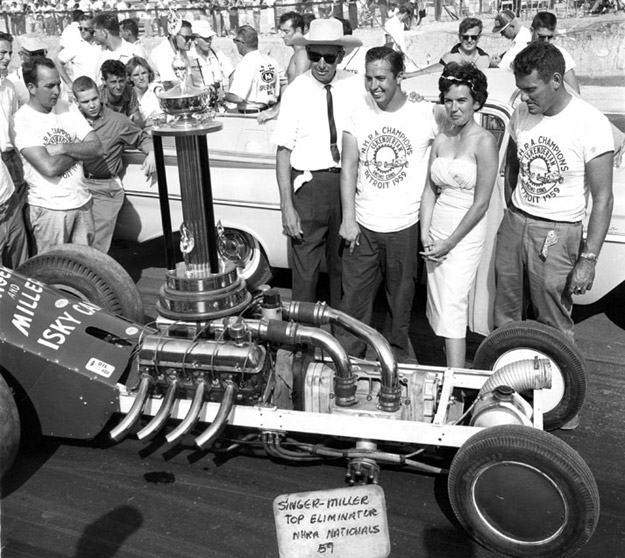 “Never before had so much high-level attention been focused on the drags. Top leaders in the auto industry stood shaking their heads, some stating, ‘I’d never have believed it if I hadn’t seen it!’ Not only impressed by types and performance of the vehicles, and the obvious investment in time and money, they were even more amazed at the hardworking, dedicated enthusiasm of the contestants.” That was the description NHRA President Wally Parks, who was still serving as editor of Hot Rod magazine at the time, wrote about the 1959 Nationals, which was contested in Detroit. In fitting fashion, considering the proximity to the car manufacturers, Top Eliminator was a three-way shootout between cars powered by Ford, Chrysler, and General Motors engines. In the end, bragging rights went to General Motors when Rodney Singer, the AA/Dragster winner, drove his 480-cubic-inch GMC-supercharged machine to the Top Eliminator title, running a 9.76 to easily defeat Jiggs Shamblin, whose mount shattered the clutch. 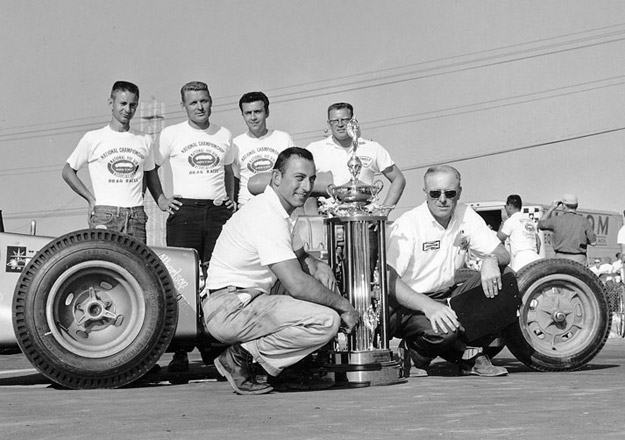 Leonard Harris was the final non-Indy Nationals winner, taking top honors at the 1960 event, which was again held in Detroit. The caption that accompanied this photo in the archives offers an apt description of not only what this photo illustrates but also how Harris landed in the winner’s circle: “Californian Leonard Harris, kneeling, left, received the Champion Spark Plug Trophy, emblematic of capturing the National Championship, after winning the 1960 Nationals in Detroit. Champion Spark Plug Racing Director Don Garner made the presentation. Harris’ Albertson Olds entry ran 9.81 to defeat the A/Modified Roadster of class champion James Red Dyer and the Cadillac-powered Tennessee Bo-Weevil for top honors.”