The Sports Report: The Sky’s the limit

When his career as a Top Fuel crew member was interrupted by the pandemic, Skylar Blades and his friends went bracket racing and so far it has worked out quite well for them.
20 Aug 2020
Kevin McKenna, NHRA National Dragster Senior Editor
The Sports Report

Sometimes, when life deals you lemons, you make lemonade, or in the case of Skylar Blades, you simply restore your lemon-yellow Chevy Nova and return the track for a little bracket racing action. For the last six seasons, Blades has been a regular at all 24 NHRA Mello Yello Drag Racing Series events, working alongside crew chief David Grubnic. He got his start working on Clay Millican’s car and then followed Grubnic to Brittany Force’s Monster Energy team two seasons ago. Of course, this isn’t a normal season, and when the current COVID-19 pandemic hit and the Force team opted to sit out the remainder of 2020, Blades returned to his first love, E.T. bracket racing. 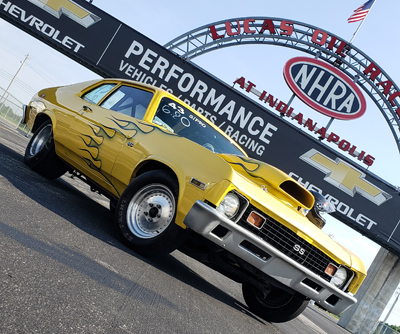 “Obviously, this isn’t what I expected for this year,” said Blades, whose job description includes bottom end and engine maintenance. “When [the pandemic] happened and we stopped racing, the car was back at home in Illinois. It had been sitting for six years and had no engine. It took a lot of work to get it to where it is now.”

In the interest of fair reporting, it actually took just a $10 wager to provide Blades with the proper motivation to work on the project.

“That’s true because Michael Brown, who works on Ron Capps’ car, bet me that his Corvette could outrun my Nova to the eighth-mile. I took the bet and my buddy, Danny Estep towed it here to Indy and we spent a month thrashing to get it to the track. Thankfully, I’ve got a lot of good friends here and guys like Justin Groat and Matt Covault, who work with me on Brittany’s team were available. I said, ‘Hey, you guys want to start a project?’ and they got drafted into helping me. It took a lot of hours and a lot of money, but we finally got the car to the track.”

Blades collected the $10 bet, but that was just the beginning. In his next outing, he captured an even bigger prize when he scored a $1,000 victory at the Outlaw Street Car Association (OSCA) event held at Lucas Oil Raceway at Indianapolis.

“It wasn’t as easy as it sounds. We had to take the engine apart because the pistons hit the [spark] plugs” said Blades. “It acted like a nitro car; make one run and tear it apart, but we got that fixed and went out and won the OSCA race. It was sort of the perfect storm because the car wasn’t perfect but it reminded me of why I missed bracket racing.”

A few weeks later, Blades fulfilled another longtime dream when he got the opportunity to race in an NHRA national event. At the Lucas Oil NHRA Summernationals, Blades double-entered in both Super Pro and Pro E.T. Having the opportunity to share the stage with the same professional teams he competes with and against at tracks all over the country was a thrill, even though he came up a few rounds short of another victory.

“Running that [national event] was amazing because it was something I thought I’d never be able to do,” he said. “Really, this car is just an old school bracket car from the 1990s, cool deal. With all my friends there, I was going to be happy winning a round or two and I got down to the last nine cars in Super Pro. I was never worse than .011 on the Tree and I sort of surprised myself. Thankfully, I have a lot of help. They guys I work with are my family, so whenever I need help, they get a call. With all this COVID stuff, we have more time than ever, so my guys are willing to lend a hand, I certainly couldn’t have done this without them.”

More recently, Blades offered the seat to another crew member friend, Kaylynn Simmons, who works as a clutch specialist on Terry McMillen’s Amalie Top Fuel dragster. Simmons rides motorcycles and races carts, but she’d never been down a dragstrip until she strapped herself into Blades’ Nova, which runs 6.6s in the eighth-mile. She caught on quickly, learning to operate the line-lock and trans-brake, and two-step ignition.

“Kaylynn is in the same boat as the rest of us; I mean she’s working, but we’re not traveling the country like we’d normally be doing,” said Blades. “She mentioned wanting to drive and I was all for it. There are so many people who work on these [nitro] cars every day but have never been down a dragstrip. She did well and I think it was a great experience for her. I can tell you, that girl has no fear.”

Blades figures he’ll continue racing his Nova for the rest of the 2020 season, and hopefully, he’ll be back on tour next season with Brittany Force’s team. As much as he loves being able to race, Blades is ready to get back to the grind. The extensive travel, long nights, and the stress that goes with racing at NHRA’s highest level don’t bother him a bit.

“I still enjoy life on the road and want to be able to do it as long as I’m young and healthy,” he said. “When I started working on a fuel team, I wanted to become a driver and that would still be my ultimate goal. In six years, it’s opened doors that wouldn’t be open if I’d stayed home. At first, it took a lot of thinking to jump into the deep end and go full-time racing, but I’m glad I did it. The only trade-off is not being able to race my car but you’ve got to take care of your job and career first.

“I can say that working alongside David [Grubnic] and [car chief] Mac Savage has been a great learning experience. They are always preaching about focus and paying attention to details and that has definitely made me a better racer. The same goes for Brittany. I see how she handles business and sponsors and that’s important too if you want to go anywhere in this sport. I definitely want to go back next year and see if we can win the championship but, in the meantime, I’m happy to be out racing my car.”