From mechanical gremlins to lucky breaks, and ultimately a trip to the beach, it's fair to say that Nick Cobb's first NHRA national event win will long be remembered.
04 Aug 2021
Kevin McKenna, NHRA National Dragster Senior Editor
The Sports Report

Two-time NHRA world champ Sherman Adcock once famously delivered the following take on the finer points of Super Class racing, “It’s just like playing rock, paper, scissors; no matter what you bring, it might not be enough.”

Indeed, truer words have never been spoken, especially when it comes to modern-day Super Comp racing, where drivers often need to split the atom just to survive. The margin for error is incredibly small because almost every car in the class is built to ultra-competitive standards and the talent level among drivers seems to continually escalate. 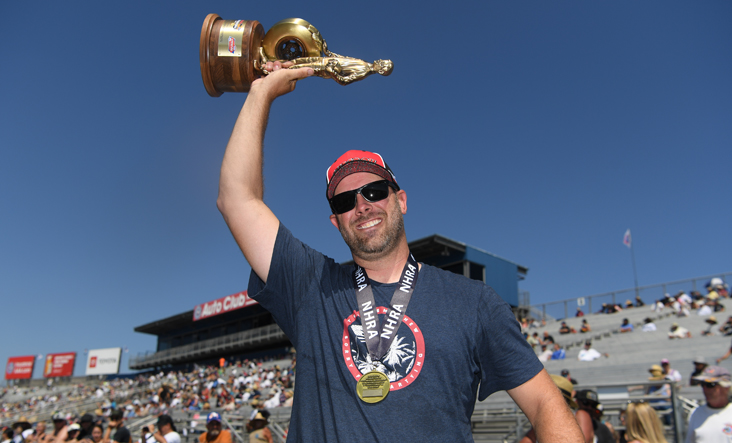 Then again, just about every racer who has ever won a race will admit that they’ve had at least one or two lucky breaks on their way to the winner’s circle. That certainly applies to newly crowned Pomona champ Nick Cobb, who used equal parts skill and good fortune to earn his first national event title.

First, we’ll get to the good part. Cobb was nearly flawless in the final round with a run that included a .007 light and an 8.906 that left practically no room for opponent Ryan Hansen, who actually left first with a .006 light, but broke out with an 8.894. A round earlier, Cobb was also sharp with a .015 bulb and an 8.904 that was too much for Mike Cornelius to overcome.

For all the great driving that Cobb did in Sunday’s semifinal and final rounds, his first victory will long be remembered for how it ended; with a low-speed trip into the Auto Club Raceway sand trap. Once Cobb saw his win light on, the celebration began, and he simply didn’t get slowed down enough to make the corner. Fortunately, the unplanned excursion didn’t hurt the car and Cobb even helped the NHRA Safety Safari crew push the car back onto the return road.

And then of course, there is the quarterfinal round where Cobb completely missed the Tree with a .129 light but watched as opponent Mike Clevenger broke out with an 8.860. Those sorts of things don’t happen very often, but they do happen, and, in this instance, Cobb will happily take it.

“You ragged me last night for being .129 in a round and getting by when a guy ran it out the back door and I needed to give you something else to talk about today,” Cobb joked in his winner’s circle interview with NHRA announcer Joe Castello. “I’ve been [.129] and won a round. I won a round and put it in the beach and I still got the trophy. One of our good buddies, Kyle Seipel used to say it’s all about the story and I’ve got hell of a story for the weekend.”

Cobb later went on to better explain the circumstances surrounding his quarterfinal run.

“A lot of people, if they had been by the pits, would have seen me working on the car till 11 p.m.,” he said. “I’ve been fighting ignition issues with spark plugs and threw the kitchen sink at the car. Last night, I did not know what to think. I just knew I couldn’t get there. I made an idiot move following the guy through and the win light turned on. Today, I was .006 and .015 so I came back with a little bit of revenge and got the job done. Man, it’s been a crazy weekend.”

For Cobb, the win could not have come at a better time. To put it mildly, his 2021 season has not, at least to this point, been all that he’d hoped it would be. Before Pomona, Cobb attended three Super Comp races including the Woodburn Division 6 Lucas Oil Series double-header and last week’s NHRA Sonoma Nationals and he had exactly zero round wins to show for it. Now, he’s one of the fairly exclusive fraternity of 400 or so drivers who have won a national event title in Super Comp.

“What a weekend. I’ve got to experience seeing others park my car on the dance floor but never imagined I’d score my first win at a track I grew up going to as a kid with my dad,” Cobb wrote on his Facebook page. “It was a crazy weekend; I fought a couple of issues during rounds three and four but still managed to get by and made sure to bring my A-game on Sunday. This was only the third race out with the new motor, and it’s been extremely consistent with a borrowed converter.”