The Sports Report: A magical moment for the Meyer family

It’s a simple and undeniable truth that some wins mean more than others, and in the wake of a personal tragedy, it’s hard to imagine any win could mean more to a driver than Dusty Meyer’s recent victory at the Menards NHRA Nationals presented by PetArmor. Meyer is no stranger to the winner’s circle; in fact, he won on the sport’s biggest stage last year at the U.S. Nationals, but after the sudden loss of his father, Joe, earlier this year, his Topeka victory carries an even greater meaning. 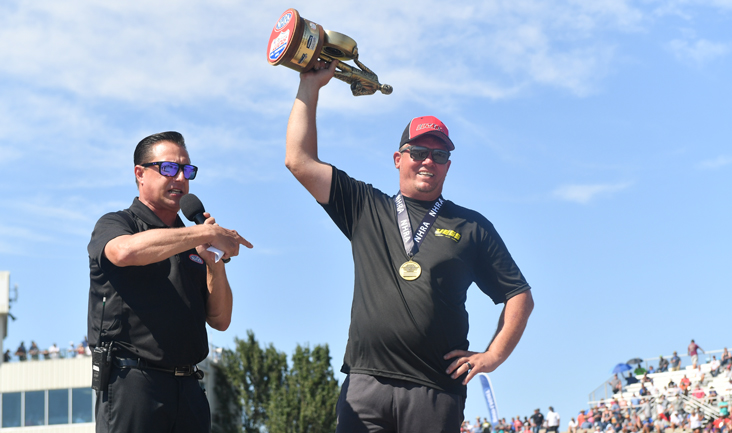 Meyer earned career win No. 5 in Top Sportsman presented by Vortech Superchargers when he defeated Kyle Firestone in the final round. Meyer also got to watch as his cousin, Rachel, continued her recent domination of the Top Alcohol Dragster class with her sixth win of the season. Racing at their longtime home track, the wins represented a truly magical and extremely emotional moment for both Kansas-bred racers. A day after the win, Dusty Meyer was able to gather his emotions and thoughts to post the following on his Facebook page.

“I can’t thank everyone enough for the kind words for our big win yesterday,” he wrote. “Obviously, this year has been the most difficult year of my life. To get in the race car that my father and I have worked on improving for the last 10 years, without him by my side, is extremely difficult. But, much like he would want, we keep pushing and digging to keep this thing going. When we finally turned on the first win light since his passing, our attitude and demeanor really turned around.

“Pulling up to the final round was emotional. Luckily, I was racing my friend Kyle, so that helped lower the stress level a little bit. There were tears from under the tower to the turnoff. After our run, Rachel was the next pair, and she turned on the win light, so then there were even more emotions down at the end of the track.”

For the last few seasons, Meyer has been a star on the rise in the Top Sportsman class, which offers some of the toughest competition imaginable. It’s one thing to be able to competently drive a six-second doorslammer, and it’s quite another to do so with the extreme level of precision that’s necessary to win in the class’ bracket racing format. There are few things in drag racing more difficult than judging the finish line at more than 200 mph, yet Meyer is able to do it with a fair amount of consistency. Last year, Meyer won a pair of national events on his way to a fourth-place finish nationally.

In Topeka, Meyer qualified in the lower half of the field with a 6.992 in his Chevy S-10 that was good for the No. 18 spot in the 23-car field. Meyer was slower than each of his five race-day opponents, which meant he spent a fair amount of time looking over his shoulder. There are no easy draws in Top Sportsman, but Meyer had one of the toughest paths imaginable to the final, including races against Matt Driskell and Darian Boesch, a pair of world champions. Meyer was at his best in the final with a .013 light and a 7.055 on his 7.03 dial, which led Firestone by .008-second at the finish line.

His fifth Wally safely tucked away, Meyer also took time to reflect on the generous amount of support he’s gotten this season from his family, friends, and the racing community in general. 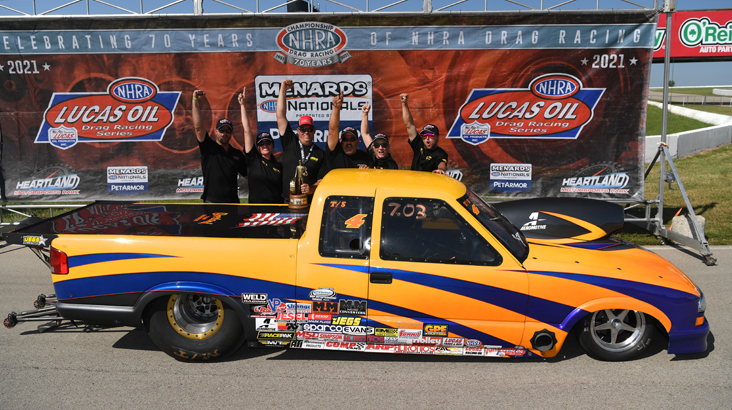 “To try and do this by myself would be impossible,” Meyer said. “This weekend was a great display of how much the racing community helps us out. We had all of our close friends right around us and would pitch in to help with whatever was needed. Jeremy [Demers] was giving me some solid advice under the tower every round, in both Super Comp [good advice, bad delivery] and Top Sportsman. My uncle, Randy, kept telling me after rounds, ‘You got this.’

"Carl [Myers] has devoted a bunch of his time and talents to keep us rolling. Royce [Freeman] helps us with anger management. The Firestones supply the best stories and entertainment on this side of the Mississippi. The list goes on. We would be lost without you guys. Big thanks to my wife, Erin, for being the rock that holds this s*** show together.”