Kayla Mozeris won the Super Stock title at the Dodge//SRT NHRA Mile-High Nationals presented by Pennzoil and then watched a few minutes later when her father, Joe, drove to the win in Comp eliminator. It was the sort of day that every family that races together dreams of, but how many actually get to experience it?

The answer is, not many.

Prior to the Mozeris family’s dynamic double in Denver, the only other time a father and daughter have shared the winner’s circle at an NHRA national event was the 2004 NHRA U.S. Nationals, where John Force won in Funny Car and daughter Ashley earned her first win in the Top Alcohol Dragster class.

Throughout NHRA's 70-year history, there have also been a handful of father-son winner’s circle celebrations, most notably Sam and Peter Biondo (2002 Englishtown), Dan and Thomas Fletcher (2009 Reading), and Ray and Dave Connolly (2004 Chicago, 2007 St. Louis, and 2008 Bristol). Despite the large number of second- and third-generation racers currently active, it remains a rare feat for any parent and their child to win the same event, which helps explain why the Mozeris family will long remember their Denver adventure. 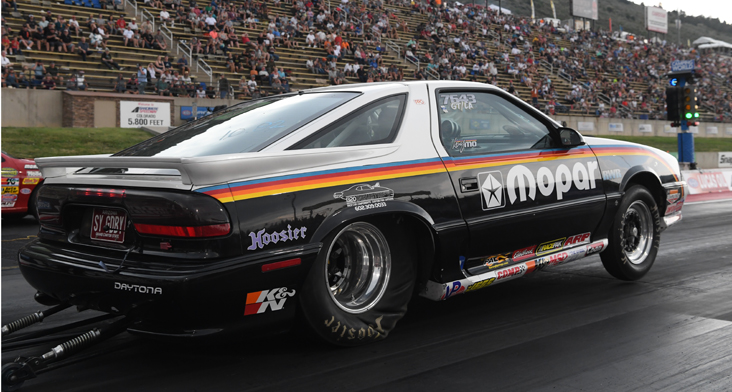 “This is just a dream come true, you always think something like this will happen but never know if it will actually happen to you,” said Kayla, shortly after her win over Scott Burton in the Super Stock final. “I don’t have words to describe it.”

Joe Mozeris didn’t have much time to get caught up in the moment of his daughter’s second national event win because he had a tough opponent in Jim Greenheck in the Comp final. As expected, it was a close contest with Mozeris wheeling his Mopar-powered dragster to a narrow four-thousandths win over Greenheck’s C-Tech Camaro.

“She [Kayla] put the pressure on me," Joe said. “I didn’t know if I was going to catch Jim. Four thousandths; that’s a tight race, and I didn’t know who won until the win light came on. It was that close. I don’t know if this has sunk in yet. I’d dreamed about sharing the stage up here with my kid. We’ve raced for 25 years and to finally have this moment is really special.”

Not surprisingly, during their post-race interviews, father and daughter each unselfishly admitted that they were more enthused about the other’s victory than their own.

“Absolutely, it was Kayla’s win. That was more exciting,” Joe noted. 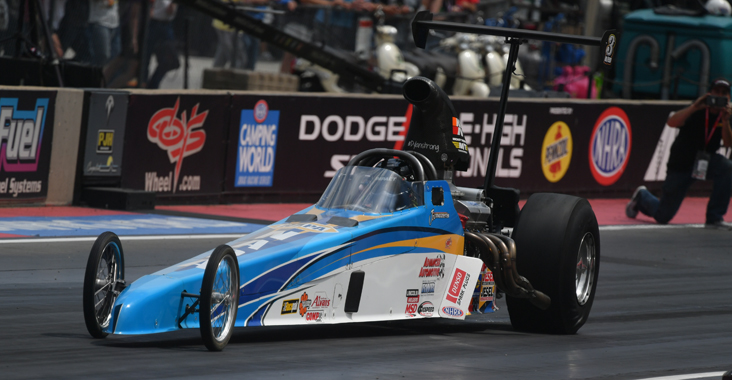 While it’s true that Joe didn’t get his first national event victory until late in his career, he’s quickly making up for lost time. Joe won his first national event at the spring Las Vegas event in 2018, and he’s now a four-time Wally winner. Perhaps more importantly, Joe has raced his B/Econo Dragster in four events this season and has three wins and a semifinal. While there is much work to be done, he merits serious consideration as a contender for the NHRA Lucas Oil Drag Racing Series world championship in Comp eliminator.

“Once I get in a groove, I try to stay focused,” he said, when asked about his recent success. “I also have a great car and a great crew.” 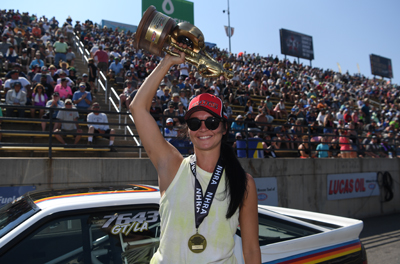 Nearly overlooked in the Mozeris family victory celebration was Kayla’s debut in Comp eliminator. She joined her father in Denver behind the wheel of a low nine-second F/DA entry and reached the quarterfinal round, where she lost to David Kramer. In her more familiar Super Stock Dodge, Kayla drove a solid race. She missed the Tree in one round but caught a break when Jim Thune fouled. In the final, she got the job done against Burton with a .035 light and a perfect 10.832 on her 10.83 dial.