Bob Locke needed some coaxing just to get to Pomona, and once he got there, he needed to win the season-ending Auto Club NHRA Finals in order to clinch the 2022 Super Gas championship, and he did just that.
16 Nov 2022
Kevin McKenna, NHRA National Dragster Senior Editor
The Sports Report

How’s this for a storybook ending? Bob Locke needed nothing less than a victory at the season-ending Auto Club NHRA Finals in order to be crowned the 2022 NHRA Lucas Oil Drag Racing Series Super Gas champion, and he delivered just that to win the title by just 11 points over Phil Unruh.

It’s hard to imagine anything in drag racing more nerve wracking than a winner-take-all final round for a world championship, but Locke didn’t seem to mind the pressure as he finished the job with a .022 light and a tidy 9.904 to defeat Brian Preszler, a driver who ironically knows a thing or two about pressure and championships, having won the 2017 Super Gas title in a similar fashion.

Ironically, one of the biggest challenges that Locke faced was actually getting to Pomona. Locke lives in Whiteland, Ind. (home of 10-time Pro Stock champ Bob Glidden) and put himself into championship contention with a win and a runner-up at the Division 3 doubleheader at World Wide Technology Raceway in St. Louis, but he had to be persuaded to venture West. Locke’s many friends, including Bo Butner and Randi Lyn Shipp, all but insisted that he make the long trip to Las Vegas and Pomona to resume the title fight, and he’s now glad he listened.

“I’m truly speechless. I wouldn’t be here without all of our friends who sent us here,” said Locke, moments after clinching the title. “We had so many people who said, ‘Bob, you’ve got to go,’ and we came, and I just cannot believe we’re here.” 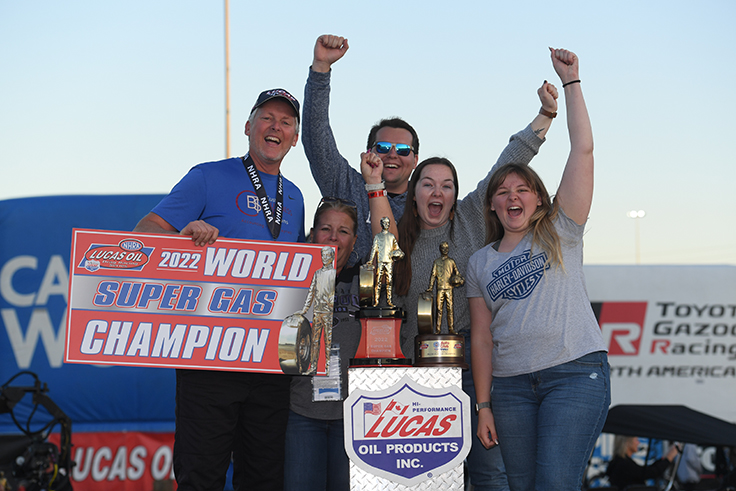 It’s hard to overlook the fact that Locke had never previously won an NHRA national event. In fact, Locke never even appeared in the final of a national event before his Pomona triumph. His impressive 665-point score was built primarily on success at Lucas Oil Series divisional races, including a win and three runner-up finishes. Every kid dreams of hitting a grand slam in the bottom of the ninth inning to win the World Series or throwing a long touchdown pass in the fourth quarter to win the Super Bowl, but how many actually come through in the face of that sort of pressure?

Locke did, and he made it look almost too easy.

Throughout the six rounds of eliminations, Locke’s lights were consistent, if not spectacular. His combination of .020 reaction times and runs close to the 9.90 index was enough to get by each round.

Since Locke races primarily in Division 3, there’s also a good chance that he wasn’t familiar with most of the competitors he was facing in Pomona because a large percentage of the field was Division 7 racers. That also didn’t seem to matter as his strategy of dialing close to the index worked to perfection.

Kicking off his West Coast trip, Locke struggled at the national and divisional events in Las Vegas, but he was rock solid in Pomona, including wins against past national event champions Jason Kenny, Damon Bustamonte, and Evan Kowalski.

Locke’s best performance actually came in the quarterfinals against Matt Treadway, where he left first with a .005 light and won a 9.890 to 9.874 double breakout. He also defeated semifinal opponent Kowalski by driving his ’58 Corvette roadster to a near-perfect 9.909.

“Vegas was an awful experience for us,” Locke said. “We tried, and we just never figured it out, so we just knew the odds were against us coming to this race, but we just attacked it like we attack every race, one round at a time. We’re going to do our best, and whatever happens, happens."

The Super Gas class has been a championship category in NHRA racing for 41 years, and Locke now joins a roster of champions that includes some of the sport’s best-known Sportsman drivers, including Peter Biondo, Scotty Richardson, Sherman Adcock, David Rampy, Luke Bogacki, and ’92 Super Gas champ Jeg Coughlin Jr., who went on to win five more titles in Pro Stock.

By nature, Super Gas offers some of the closest side-by-side racing in all of NHRA, but few moments in history can match Locke’s “must-win” performance in Pomona.