When Tyler Cassil claimed the Super Stock and Stock titles at the Menards NHRA Nationals presented by PetArmor, he became just the 29th driver to double up at an NHRA national event. The rare feat has been achieved just 43 times since 1991.
16 Aug 2022
Kevin McKenna, NHRA National Dragster Senior Editor
The Sports Report

The 100-degree heat that enveloped Heartland Motorsports Park during last weekend’s Menards NHRA Nationals presented by PetArmor made for challenging conditions for both racers and fans, but the heat appeared to have had little effect on Tyler Cassil, who joined one of the most exclusive clubs in drag racing when he won in both Super Stock and Stock. Cassil parked both of his matching COPO Camaro entries in the winner’s circle, becoming just the 29th driver to double. In NHRA’s 70-plus years, the feat has been achieved just 43 times. 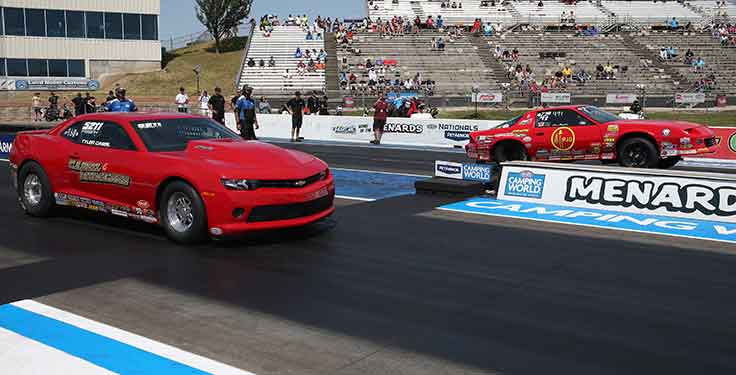 “This was definitely not on my bucket list,” said Cassil. “It’s just such a rare feat. National events are something to shoot for, and a double is something everyone dreams of, but I’d deemed it unobtainable. It’s humbling, to be honest. I’m still at a loss for words.”

Despite his modest demeanor, Cassil isn’t exactly a stranger when it comes to high-pressure situations. He won his first NHRA national event in 2019 on the sport’s biggest stage when he earned the Super Stock title at the U.S. Nationals.

The heat in Topeka was a factor for every racer (and most fans and officials), but Cassil somehow managed to get through 12 tough rounds between both classes. He was also pitted in the neither regions of the expansive Heartland Motorsports Park pit area, quite a distance from the starting line.

“In the later rounds, my crew stayed on the starting line, and I just went back to the pits, swapped cars, and headed up,” said Cassil. “I grew up in the Midwest, so I guess I’m well-seasoned, but the Stanfield team was nice enough to share some ice cubes before the final rounds.”

Cassil was admittedly more comfortable in his Stock eliminator car, although he did manage a tidy .006-second package in the second round of Super Stock. Cassil tackled the Stock final first, and his opponent was race promoter and winner of the recent Norwalk event. Admittedly nervous, Cassil turned in a strong effort with a .025 light and a 10.080 on his 10.07 dial, taking the stripe by a hundredth of a second. 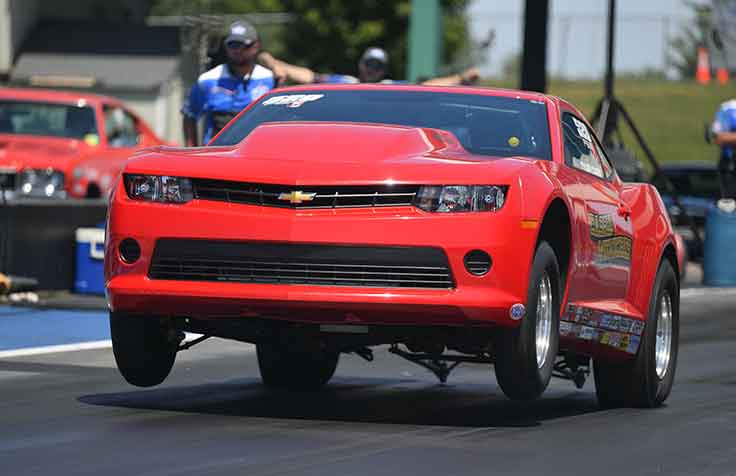 “The Stock final; that’s where all the pressure was at,” Cassil said. “It was my first attempt at a double, and you can either win or start with a loss and miss a chance to make history. The one thing no one wants to do is lose both finals, so once I got the first win, it really took the pressure off. I thought that anything after that was icing on the cake.”

Winning the Super Stock final was far from a given, especially because Cassil had to race Greg Stanfield, the reigning world champ and contender for a sixth title this season. That final ended quickly as Stanfield made a rare miscue and red-lighted by just .002-second.

“As soon as I saw his red-light, I was celebrating in the car,” said Cassil. “I also have to say that Greg is a class act. He builds our engines, and I consider him a great friend. He’s been instrumental in helping us take our program to the next level. Honestly, there is no one you’d rather race in a final, even if his win/loss record is a little troubling.”

Ironically, the last driver to double up at a national event is Stanfield’s son, Aaron, who won in Pro Stock and Factory Stock at the 2020 Houston event. Cassil’s double also comes 31-years after Pat Austin pulled off the original Top Fuel/Top Alcohol Funny Care double at the 1991 Topeka event.

The show-quality Camaros that Cassil drives are owned by Ward Munkres, and at the races, the team has help from Paul Clark, Pat Winsler, and Adam Gooch. Cassil also got to celebrate the feat with his extended family.

“The great thing is that we had four generations of Cassils in the winner’s circle,” said Cassil. “My dad [Tracy] surprised me and brought my grandmother Barb to the races. My wife, Carrie, and my kids, Ashlee and Addi, were also there. It was just one of those weekends I’ll never forget.”