With 22 national events, 44 NHRA Lucas Oil Drag Racing Series regional and divisional events, plus a JEGS SPORTSnationals and JEGS Allstars thrown in for good measure, it was hard to find a weekend where there wasn’t coast-to-coast action for NHRA’s Sportsman stars. The sheer number of racers and races make it almost impossible to sort through the year’s most memorable events, but we’ve done just that in our annual list of Top 10 Sportsman moments.
21 Nov 2022
Kevin McKenna, NHRA National Dragster Senior Editor
The Sports Report

With 22 national events, 44 NHRA Lucas Oil Drag Racing Series regional and divisional events, plus a JEGS SPORTSnationals and JEGS Allstars thrown in for good measure, it was hard to find a weekend where there wasn’t coast-to-coast action for NHRA’s Sportsman stars. The sheer number of racers and races make it almost impossible to sort through the year’s most memorable events, but we’ve done just that in our annual list of Top 10 Sportsman moments. 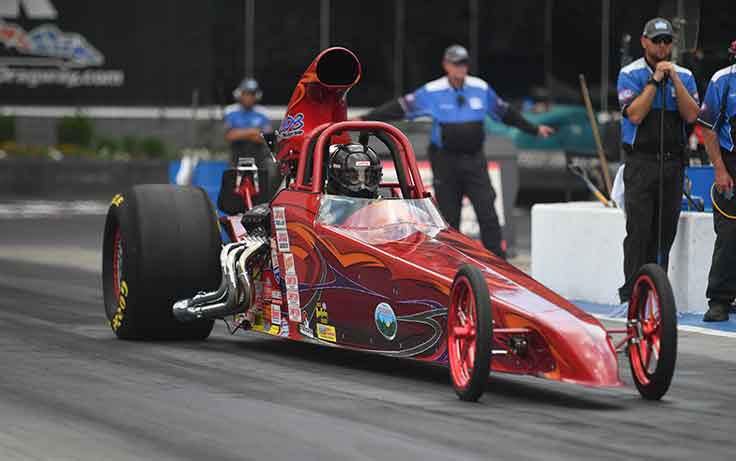 In national event competition, there was just one perfect run turned all season, and it came in the second round of Super Comp at the NHRA Thunder Valley Nationals in Bristol. Robert Houston hit the nail right on the head when he coupled a .000 light with a perfect 8.900 run in his Race Tech dragster. Incredibly, the driver with the best view of the run was Houston’s grandson, Vance, who happened to be in the other lane and took the loss despite a solid .007 light of his own. Houston eventually went out in round three, but he did leave Bristol with a time slip that is suitable for framing. Houston did return later in the season to grab a win at the fall Charlotte event. 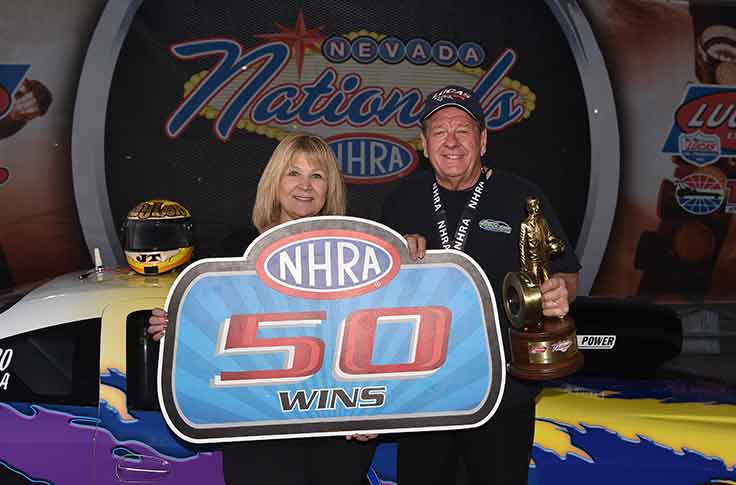 The list of drivers, both Pro and Sportsman, who have 50 or more NHRA national event wins is fairly short as just 21 drivers have accomplished the feat in the long history of NHRA. The latest driver to join that club is Jeff Taylor, who won the Comp title at the fall Las Vegas event. Taylor came into the 2022 season with four world championships and 49 wins in Comp, Super Stock, Stock, and Super Comp. While his Hall of Fame credentials were already well established, he desperately wanted to add a 50th win as a tribute to his late brother, Charlie. Ironically, Taylor, Eddie Krawiec, Edmond Richardson, and Doug Kalitta each started the year with 49 victories, but Taylor was the only one to get there this season. 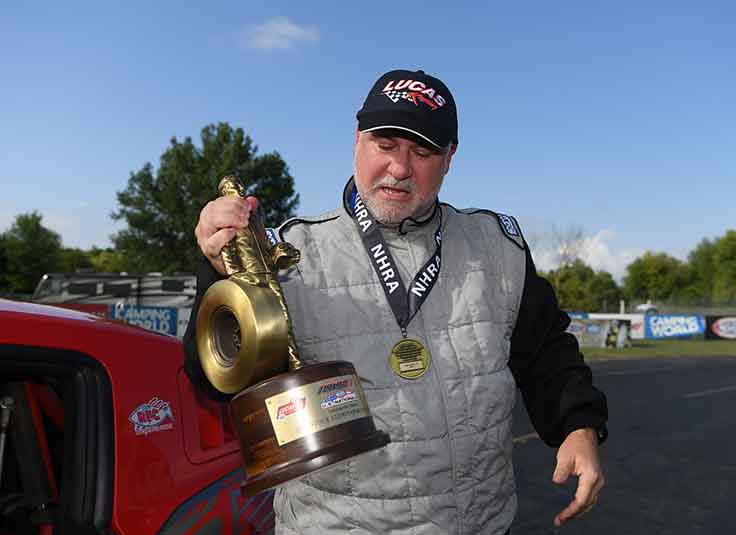 Any driver who wins the NHRA U.S. Nationals knows they’ve accomplished something very special, but in the case of 2022 Stock champ Brett Candies, the feeling was amplified thanks to a long and successful family history in the sport. As most know, Candies is the son of legendary Top Fuel and Funny Car team owner Paul Candies, who won championships with Richard Tharp and Mark Oswald prior to his passing in 2013. Tharp also won the U.S. Nationals Top Fuel title in 1976 in a Candies & Hughes entry, so when Brett won the Indy Stock title earlier this year, it was completely understandable to expect a few tears to be shed. “My dad would be so proud right now,” said Candies, shortly after his final-round win over Jim Marshall. “He loved this race.” 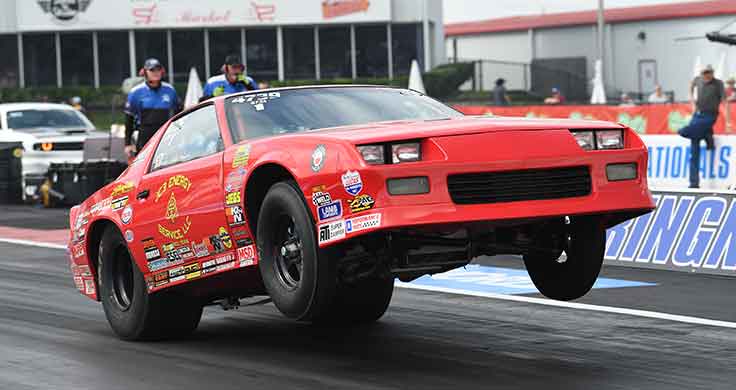 Greg Stanfield may have come up short in his bid for a sixth Super Stock world title, but what he’s accomplished in his career might never be duplicated. Stanfield won four Super Stock titles in a five-year span between 1990-1994 before becoming a successful Pro Stock racer and engine builder. In 2021, Stanfield added a fifth title with another dominant season. He nearly duplicated that success this season with an epic points battle that wasn’t decided until the final race of the season. Stanfield needed to reach the semifinal round in Pomona in order to pass leader Pete D’Agnolo and secure the title but dropped a tough race against Tim Seymour. Stanfied’s 691 points is one of the highest totals to not win a title, and he was just eight points behind D’Agnolo. Oh, and one more thing, all six of Stanfield’s championship runs have come behind the wheel of the same Chevy Camaro. 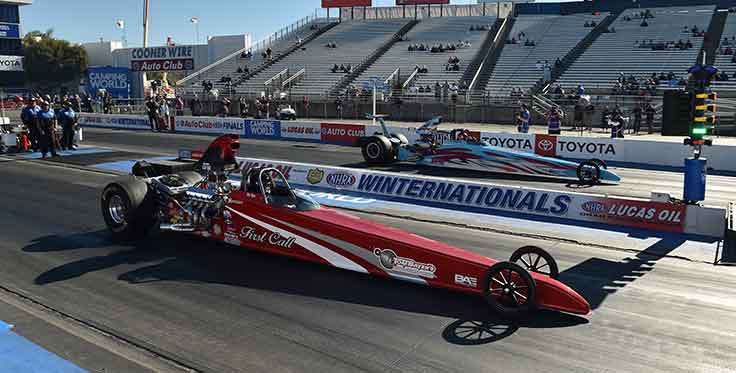 Madison Payne made headlines in 2022 by beating NASCAR Hall of Famer Tony Stewart in the Las Vegas Top Alcohol Dragster final, but her younger brother, Toby, will likely never let her forget what happened eight months earlier at the start of the season. The Payne’s raced in the second round of Super Comp at the NHRA Winternationals, with Toby scoring bragging rights with an 8.911 to 8.919 victory. Both drivers were primed for the contest with Toby’s .003 light just a shade better than big sister’s .008. The Paynes descend from drag racing royalty with grandfather Brad Anderson and parents Jay and Shelly Payne each having successful careers, so it’s highly likely they’ll face each other for many years to come.

HOW TO LOCKE UP A CHAMPIONSHIP

When Bob Locke drove to a win and a runner-up at the huge Division 3 doubleheader in St. Louis, he immediately became a contender for the 2022 Lucas Oil Super Gas championship, but finishing the job was far from easy. Locke didn’t fully anticipate being in a championship fight, so he had to make the decision to travel west for the final three events of the season in Las Vegas and Pomona. A little coaxing from his friends took care of that part, but the two races in Las Vegas weren’t kind to Locke, which meant that he came into the Auto Club NHRA Finals in Pomona facing a “must-win” situation. While Locke is a competitive Super Gas racer, he’d never previously won a national event, and the Indiana resident was unfamiliar with most of his Division 7 competitors in Pomona. Regardless of the challenges, Locke pulled off what many thought impossible when he won the race and the 2022 world championship. 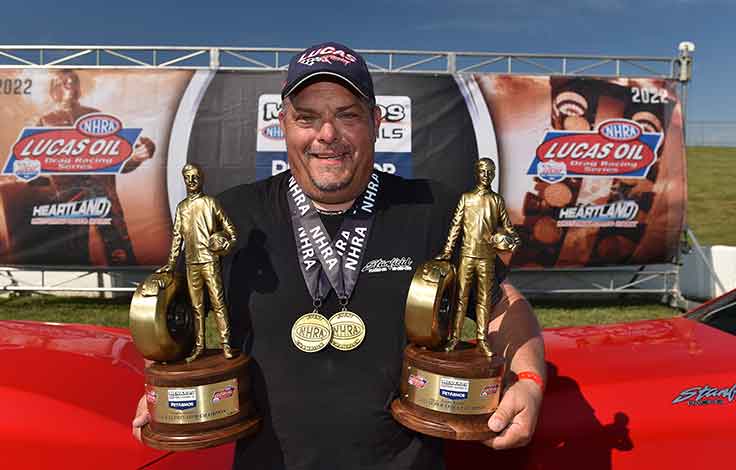 National event doubles are still pretty rare, so when one happens, it’s worth celebrating. This season, just one driver was able to leave with a pair of Wallys, and that was Tyler Cassil, who took care of business in both Stock and Super Stock at the Menards NHRA Heartland Nationals in Topeka. Cassil has won plenty of races in his career, but nothing compares to this event, where he defeated Tyler Bohannon to win in Stock and completed the rout when he took out title contender Greg Stanfield to win in Super Stock.  All told, Cassil went 12-0 for the weekend. Ironically, the Topeka event was Cassil’s only NHRA national event appearance of the season, but he certainly made the most of it. 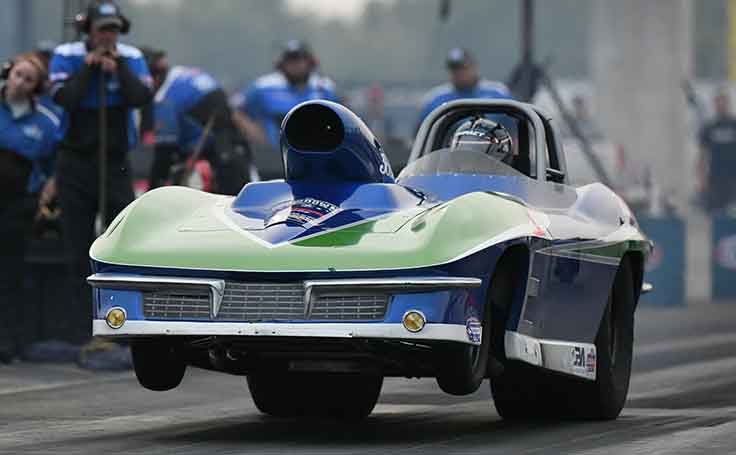 Bo Butner’s return to Pro Stock this season wasn’t everything he’d hoped it would be, but his season in Super Gas was nothing short of spectacular. Butner has raced his ’63 Corvette sporadically in Super Gas for a couple of seasons with a fair amount of success, but he checked a big item off his to-do list when he won the Dodge Power Brokers NHRA U.S. Nationals title. A couple weeks later, Butner rolled into Maple Grove Raceway and won for a second time. The former Comp and Pro Stock world champ didn’t have much luck at divisional events or he likely would have challenged for the world title. Instead, Butner finished 11th out of more than 700 Super Gas drivers, missing the Top 10 by a single point. Butner also finished the year by marrying longtime fiancee' Randi Lyn Shipp in a Las Vegas wedding that was the social event of the season. 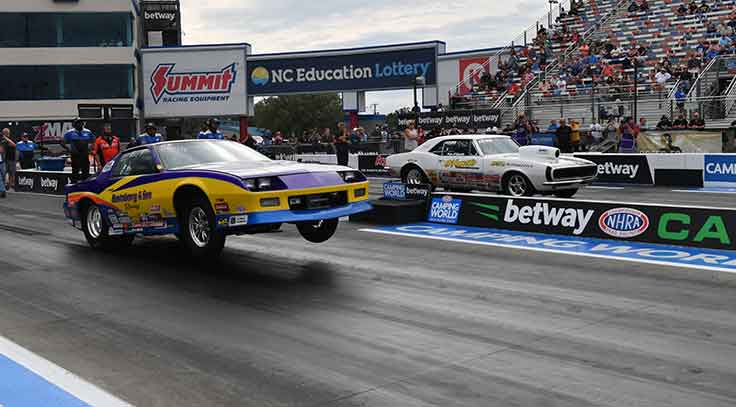 There were multiple contenders for this, including a number of Super Comp racers, including Allison McKoane (Las Vegas 1), Michael Handras (Charlotte), Pat Debottis (Norwalk), and Michael Holcombe (Houston). All of the above delivered during the final round, where pressure can often take its toll and mistakes tend to be amplified. However, our vote here goes to Troy Huntzberry, who not only won the Super Stock crown at the Betway NHRA Carolina Nationals in Charlotte but put a stamp on the victory with a nearly perfect run. Huntzberry, in his SS/JA ’89 Camaro, left with a .001 light and then crossed the finish line with a 10.040 on his 10.04 dial just missing a perfect run. Oh, and the driver in the other lane? That just happened to be Pete D’Agnolo, who went on to win the 2022 Super Stock world title.

THREE OUT OF FIVE AIN’T BAD 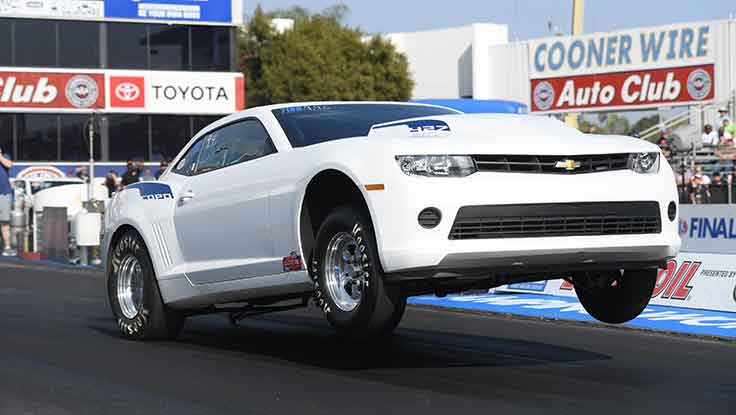 Leo Glasbrenner attended just five national events in Stock during the 2022 season, but he won three of them, which isn’t a bad batting average. Glasbrenner kicked off the season in the best way possible with a win at the Winternationals, and two weeks later, he duplicated that success in Phoenix, wheeling his ’14 COPO Camaro to 12 straight round-wins to start the season. Late in the season, Glasbrenner struck again when he won the fall Las Vegas race, giving him 10 career wins in national event competition. With three wins, Glasbrenner also completed a rare perfect season scorecard, which helped elevate him to a No. 5 finish in the battle for the championship. Glasbrenner struggled a bit at divisional races, with just a lone semifinal to his credit. Otherwise, he’d likely have been battling Jimmy Hidalgo Jr., Brad Burton, and Ryan McClanahan late in the season for the world title.