With back-to-back wins in Bowling Green and Indy, Edmond Richardson has remerged as one of NHRA’s best super class racers and more than 30 years into his career, he’s still got something to prove.
08 Sep 2021
Kevin McKenna, NHRA National Dragster Senior Editor
The Sports Report

Bad news for anyone who thought Super Gas racing would somehow be easier in 2022.

Edmond Richardson is back, and he plans on sticking around for a while.

Richardson won the Dodge//SRT U.S. Nationals Super Gas title to earn the 49th NHRA national event win of his career. A week before that, he scored Lucas Oil Series divisional win No. 50 when he won the long-running Division 3 event in Bowling Green, Ky. For those keeping score, that’s 14-straight rounds of eliminations. An impressive feat to be sure, but for Richardson, it’s just another day in the life. 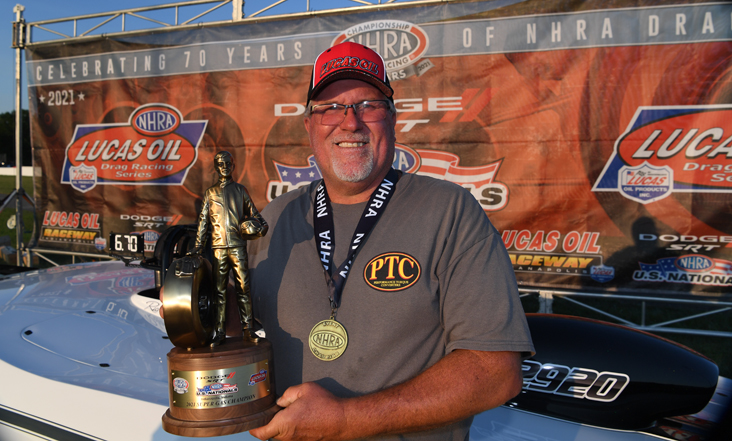 “I thought my driving was sub-par, especially at Bowling Green,” said Richardson. “You’ve got to remember that this is a new car. It had never made a quarter-mile run before we got to Bowling Green and we’d never had the throttle stop turned on. I got three time trials and it went 9.79 on the last one and I said to my sons, ‘We’re in the game boys.’ I really just drew the right people at the right time. I mean I did have a nine-pack [.009 package] but that was a terrible run.”

Richardson didn’t take much time to celebrate his Bowling Green victory. Three days later, he hit the track again in Indianapolis to begin his pursuit of a second U.S. Nationals title. That pursuit ended late Sunday afternoon when Tim Gillespie red-lighted in the final round.

“The whole point of going to Bowling Green was to get right for Indy,” Richardson said. “Indy was always the goal. Winning Indy twice; I think I’m more proud of that than anything. The rest of my career has been good, but Indy is bigger.”

For the better part of the last decade, Richardson’s appearances at NHRA events have been sporadic. He’s been content to spend more time with his three sons, Ryan, Blake, and Austin, who are each aspiring businessmen and racers. Ryan bagged a pair of national event wins, claiming Super Comp and Super Stock titles in Atlanta in back-to-back seasons.

“I think I have more fun watching my boys bracket race than anything else,” said Richardson. “They’re all grown up now and they’ve got homes and life is good. We run our business, RBZ Billet, and it’s doing really well.”

So why did Richardson decide to come back? We’ll get to that but first, how about a quick history lesson.

From 1990 to 2014, Richardson was one of NHRA’s most bankable sportsman racers winning 48 national event wins and five world championships across several categories. He seemingly won at will, conquering every class including Super Stock, Stock, Super Comp, and Super Street. Ironically, he’d never won the Super Gas race until last week’s Indy triumph. In his prime, Richardson is also the master of the double. He’s made that enormously difficult feat look deceptively easy, leaving with a pair of Wally trophies five times in his career.

There was also a time when Richardson and his younger brother, Scotty, terrorized the Super Street class to the point where the so-called “Richardson rule” was enacted, limiting Super Street racers to a single entry at national or divisional events. That rule has since been rescinded, but not before the Richardson brothers combined to win 11 national events in Super Street.

As for the return, Richardson can name three things that helped motivate him.

“First, there was the whole 50 wins thing,” he says. “Everyone wants to do that. Secondly, I wanted to win in Super Gas because I’d never done that before. I ran a little Super Gas back in the day, but that was mostly Scotty. Finally, I want to say I won a championship in five decades. I won in the 1980s, 1990s, 2000s, and 2010s. I’d like to knock out one more before I’m done. Heck, I’d even like to build a Top Dragster because that looks like a lot of fun.”

Richardson is quick to admit that a lot has changed since his dominant decade of the 1990s but he’s willing to roll with the changes and based on his recent success, he hasn’t lost much if anything.

“The biggest difference now is that everyone is dialed. They know exactly what their car is going to run,” he says. “We had those old air stops and the parts weren’t as good. There were guys like Sherman Adcock, Eli Lopez, and Roger Warren that were ahead of their time. Scotty and I didn’t always have the best stuff, but we learned at an early age. By now, the field has caught up.” 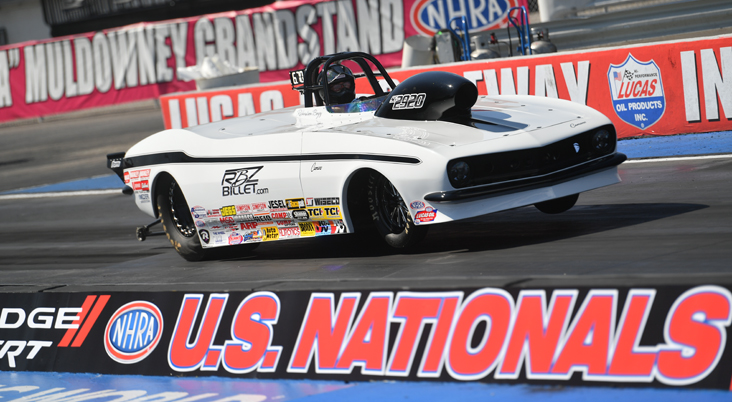 Throughout his career, Richardson consistently managed to pull off another feat that’s nearly as impressive as winning 50 races or five championships. He’s able to portray an immense amount of confidence without being arrogant. When he glances at a winning time slip, looks at his opponent’s numbers and wonders aloud, “I don’t know what that guy was thinking. He was just out there wasting fuel.” it comes off as far more humorous than egotistical. He’s easily one of the five best sportsman racers NHRA has ever produced but he’s not willing to admit it, at least not publicly.

“I never really think about that,” he says humbly. “Were some of the things that we did awesome? Hell, yeah, but I raced for a living and it paid the bills. I learned a long time ago that if you get too cocky, it will bite you. I remember one year David Rampy and I were racing for the championship and I decided to chase him. He beat me three out of four times. All I had to do was go to a different race and it was over. I was just a dummy who made a bad decision. I pretty much told him how good he was by chasing him.

“There are so many good racers out there. There’s a lot of people who think Scotty is the best ever but I also look at what Peter [Biondo] has done. And then there are some of the younger guys like Justin Lamb and Luke Bogacki, who’s killing it in Super Gas this year. You could tell how good he was going to be when you saw him drive his Jr. Dragster. And what about “Nasty Nick” Hastings? He doesn’t race NHRA stuff but he might be the best bottom bulb racer I’ve ever seen. Me, I'm just an old guy out there trying to keep up.”

Whether he wants to admit it or not, Richardson still ranks among sportsman racing’s elite and he proved it with his back-to-back victories. The early leader in the 2022 JEGS Allstars standings, he figures to be a regular at Division 3 events for the rest of this season and next. He’s also planning on a full slate of national events including St. Louis and Bristol this season.

“We’ll run a few more and see how it goes, he said. “The division is wide open right now so I might be able to do something this year. I’m able to do this because I’ve got great support from JEGS, Strange, APD, Brodix, Charlie Stewart Race Cars, TCI, Hoosier, Comp Cams, and RBZ Billet. They keep me going.”