Last week, we had some fun with the top NHRA Sportsman racing moments of the 2022 season, and now it's time for the Top Alcohol Dragster and Top Alcohol Funny Car classes.
29 Nov 2022
Kevin McKenna, NHRA National Dragster Senior Editor
The Sports Report

Last week, we had some fun with the top NHRA Sportsman racing moments of the 2022 season, and now it's time for the Top Alcohol Dragster and Top Alcohol Funny Car classes. Not surprisingly, there were many memorable moments to consider, and breaking an entire season down to just 10 proved to be a nearly impossible task. That didn’t stop us from compiling the following list. Feel free to debate amongst yourselves. In no particular order, here goes: 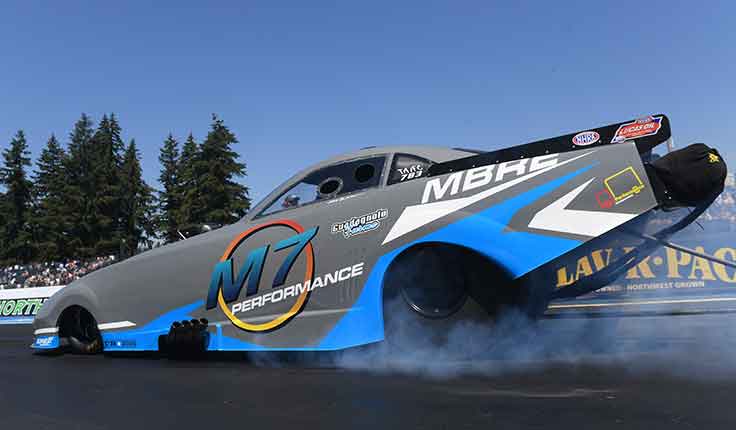 At the Flav-R-Pak NHRA Northwest Nationals in Seattle, Jake Guadagnolo faced a field that included Top Alcohol Funny Car heavyweights Doug Gordon, Chris Marshall, Brian Hough, Nick Januik, and Mike Doushgounian. Guadagnolo probably didn’t like his chances, especially after qualifying No. 6 in a six-car field. The former bracket racer was undeterred and ran the table to become the latest first-time Top Alcohol Funny Car winner after he defeated Hough in the final, 5.565 to 5.567. With the win, Guadagnolo became one of the few TAFC drivers to win with an automatic transmission, joining Mick Snyder, winner of the 2004 Chicago event and 2021 Brainerd champ Kyle Smith. Guadagnolo threw in a couple more semifinal finishes on the season and ended the year as the No. 12-ranked driver in the class. 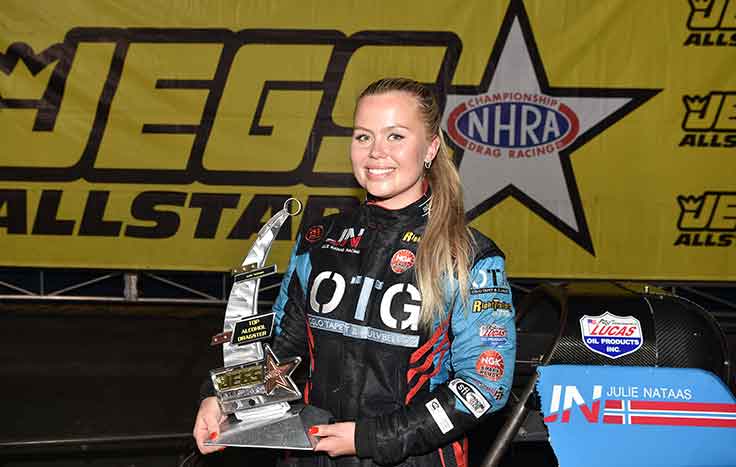 Julie Nataas pulled off a rare feat when she won the Top Alcohol Dragster title at the JEGS Allstars and then followed with a NHRA U.S. Nationals victory on Monday afternoon. The fact that Nataas won seven straight rounds against the best competition in the sport is impressive, but the manner in which she won may have been even more remarkable. Nataas got the win during Saturday’s JEGS Allstars, but the final round featured a bit more excitement than she bargained for. Opponent Joey Severance spun the tires, but Nataas had issues of her own after the chute deployed early. At half-track, Nataas watched as the body of her Meyer Racing dragster come apart, scattering scraps of carbon fiber all over the track and into her lap. Nataas managed to get the car stopped without further damage and regained her composure enough to give a memorable top end winner’s circle interview. The Meyer team had a new body delivered in time for Monday’s eliminations, where Nataas completed the double by beating Mike Coughlin in the final. 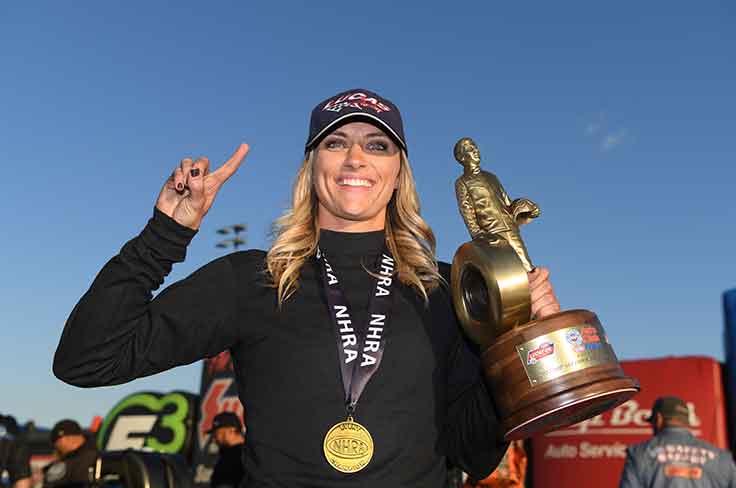 The final Top Alcohol Dragster race of the season could also be considered a contender for the most dramatic race of the season after Taylor Vetter took a wild ride in her Plan B dragster. Vetter became the 20th female winner in Top Alcohol Dragster when she ran a 5.27 to stop Joey Severance in the final, but things got interesting in the shutdown area after Vetter’s car flipped on its side and slid down the left side guardwall. Surprisingly, the car did not appear to sustain a lot of damage, and Vetter was soon joined by her elated crew in the Pomona winner’s circle. In her post-race interview, Vetter was composed and took full responsibility for the incident. It’s likely that Vetter will win more races in the coming years, but she’ll obviously never forget her first victory.

TONY STEWART GOES TO THE FINAL IN HIS NHRA DRIVING DEBUT 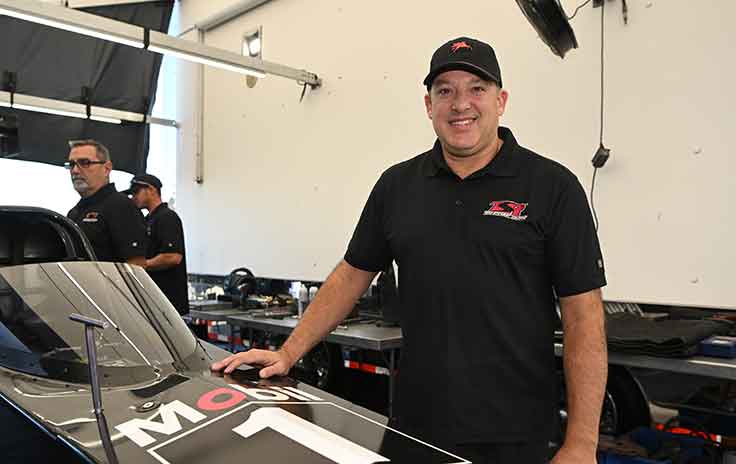 It was big news when NASCAR Hall of Fame driver and owner and former IndyCar series champ Tony Stewart joined the ranks of NHRA team owners this year, but it was even bigger news when “Smoke” made his competition debut as a driver in the Top Alcohol Dragster class late in the season in Las Vegas. Driving his Mobil 1 dragster owned and tuned by the McPhillips family, Stewart quickly adapted to his new surroundings as he qualified No. 2 in the quick field. In eliminations, Stewart was extremely consistent in his reaction times and reached the final round, where he lost to another first-time winner, Madison Payne, by just .0002-second. The appearance of Stewart brought some much-deserved and overdue attention to the NHRA Lucas Oil Drag Racing Series, and based on his reaction, it’s likely that NHRA fans will see more of Stewart in 2023 and beyond. 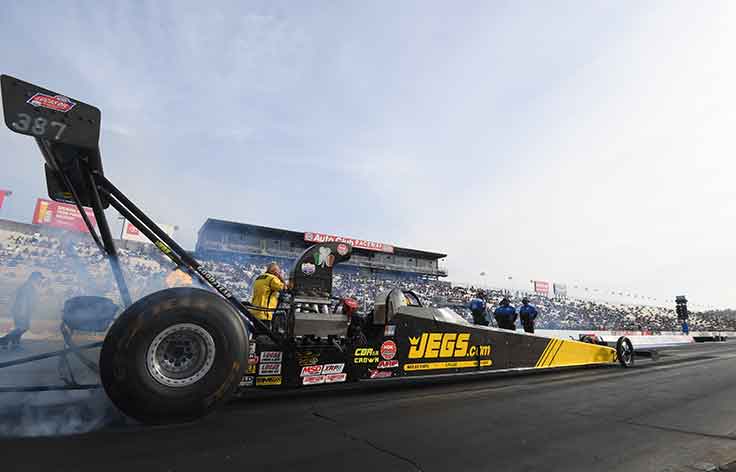 Already a winner in Pro Stock Truck, Top Sportsman, Top Dragster, and Super Comp, Mike Coughlin added another class to his total when he won the season-opening NHRA Winternationals in Top Alcohol Dragster. Coughlin has spent the past few seasons in Top Dragster with a fair amount of success, and he wasn’t necessarily looking to compete in the TAD class, but after watching his nephew, Troy Jr., enjoy success in 2018-2019, he decided to give it a try. Coughlin hooked up with the McPhillips team for a few events and proved to be a quick study, as he not only won Pomona but also won the regional event in Bowling Green, Ky. Coughlin also made a guest appearance in Robin Samsel’s dragster at the NHRA U.S. Nationals and went to the final round. 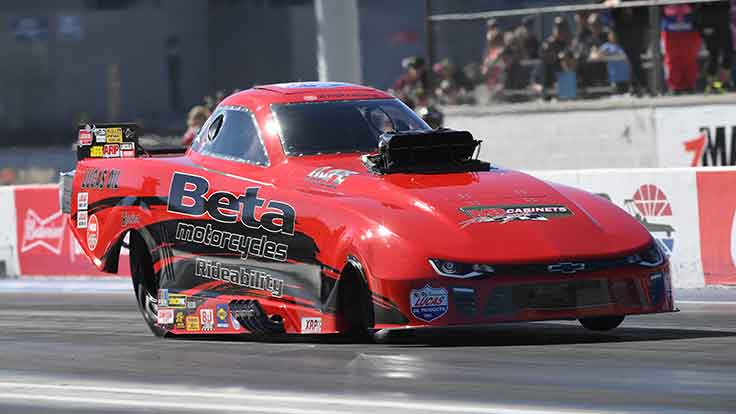 Most fans probably thought that Doug Gordon’s season was over after he was involved in a frightening crash during eliminations in Brainerd that destroyed his Beta Motorcycles Camaro. Although Gordon wasn’t seriously injured, no one would have blamed the former champ had he decided to take the rest of the season off in order to regroup, but that apparently wasn’t an option. With the help of chassis builder Jonnie Lindberg, Gordon was back on track within two months and quickly resumed his quest for a second world title. Upon his return, Gordon made five starts with his new car and posted three wins and a runner-up to outlast former champs Sean Bellemeur and Shane Westerfield and lock up his second title. 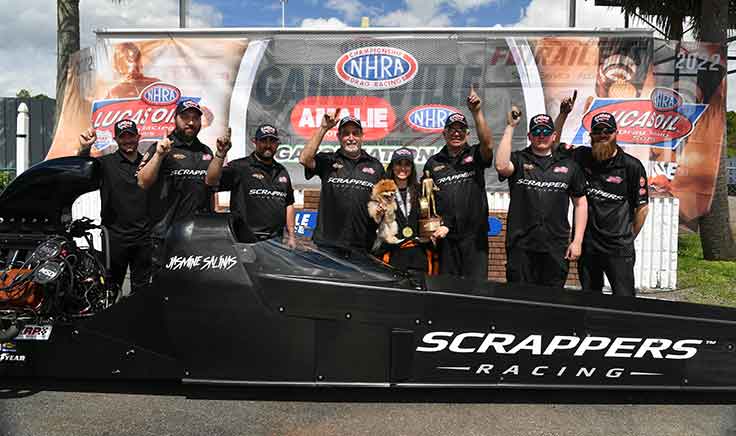 Jasmine Salinas admittedly had a lump in her throat when she arrived at Gainesville Raceway this season, and few could blame her following the harrowing crash she suffered at the 2021 event. Salinas quickly conquered whatever fears she may have had and won her first national event title by beating Julie Nataas in the final round. Tuners Rich McPhillips Sr. and Jr. had Salinas solidly in the 5.2s for most of the event, and she did the rest with a solid driving. Salinas went on to win three more times in 2022, including the Dallas national event, and was in contention for the championship until late in the season. She eventually finished the season tied for second place with Matt Cummings. 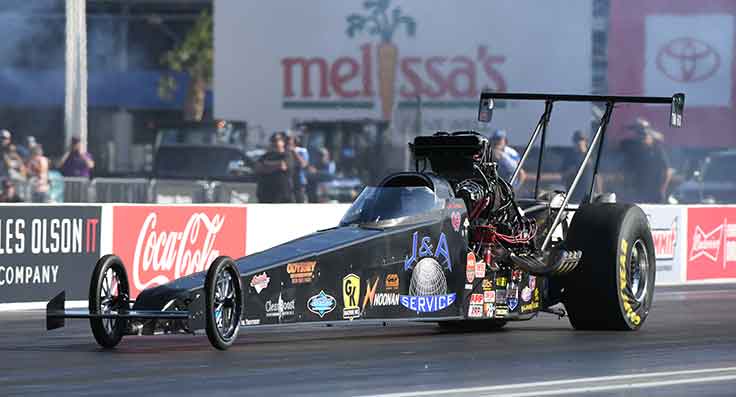 From 2015-18, Joey Severance was nearly unstoppable, winning four world championships and 17 national events, but the last few seasons have been a bit barren for the J&A Service team. That changed dramatically this year, as Severance returned with a dominant performance that included six wins in nine final rounds and a massive 723-point total that was 64 points clear of second-place Matt Cummings. Severance scored national event wins in Las Vegas and Houston to go with four regional victories. In winning championship No. 5, Severance also helped disprove the myth that the days of supercharged cars winning in the Top Alcohol Dragster class were over. 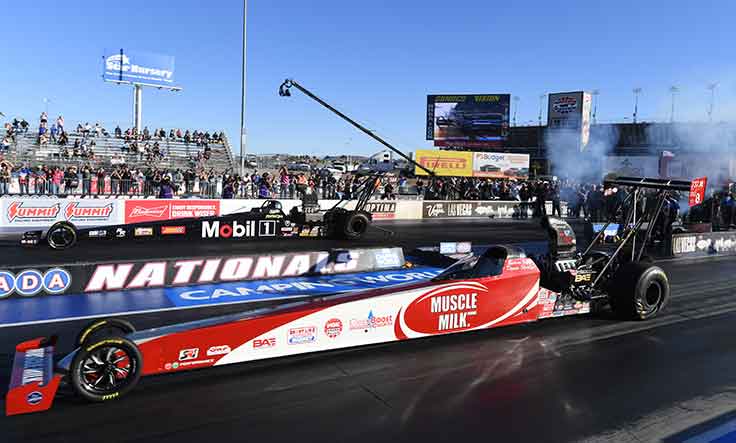 While the arrival of Tony Stewart grabbed most of the attention at the fall Las Vegas race, that event will also be long remembered for the emergence of 21-year-old Madison Payne as one of the rising stars in NHRA racing. Payne, the daughter of Shelly Anderson and Jay Payne and the granddaughter of alcohol racing pioneer Brad Anderson, previously enjoyed success in Super Comp before taking the reins of Duane Shields’ Muscle Milk Top Alcohol Dragster. Payne won the regional event in Phoenix at the start of the season and then went to the final round of the Dallas national event. In Las Vegas, Payne flew under the radar while most of the attention was focused on Stewart’s NHRA driving debut. The final round was a classic, as Payne left first by a few thousandths (.061 to .065) and needed every bit of it as she won on a tiny holeshot, 5.262 to 5.258. The final margin of victory was just .0002-second, making it the closest race of the season. 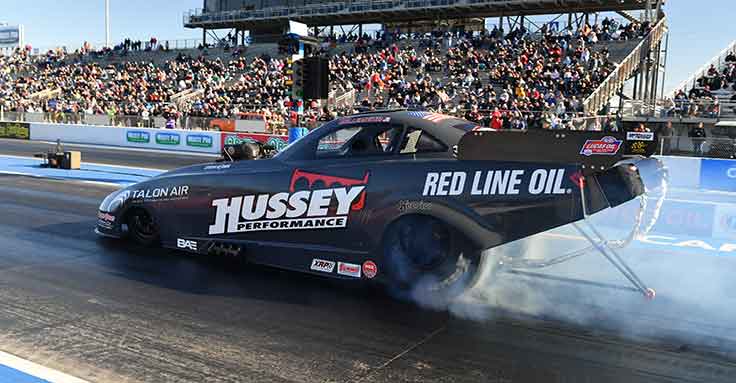 Sean Bellemeur came up short in his latest title defense, but that doesn’t mean there weren’t a lot of bright spots for the Hussey Performance team in 2022. Bellemeur won five events and appeared in 11 final rounds, but one of his most memorable performances came early in the season at the Amalie Motor Oil NHRA Gatornationals in Gainesville. Bellemeur kicked off eliminations with a 5.41 in his win over Kris Hool and then took full advantage of premium air and track conditions with a 5.369 in the second round against D.J. Cox that was the quickest pass of the season and not far off his own 5.352 national record set in Gainesville during the 2019 season. The final round was postponed and completed in Charlotte, with Bellemeur losing to Matt Gill, but the three-time champ still left Gainesville Raceway with a time slip that is suitable for framing.