The Sports Report: Fletcher on the verge of more history

There was a time when the news of a Dan Fletcher victory would barely register a blip on the drag racing radar screen. For most of his career, Fletcher won often, securing a total of 104 national event wins since his inaugural win at the 1994 Columbus event. 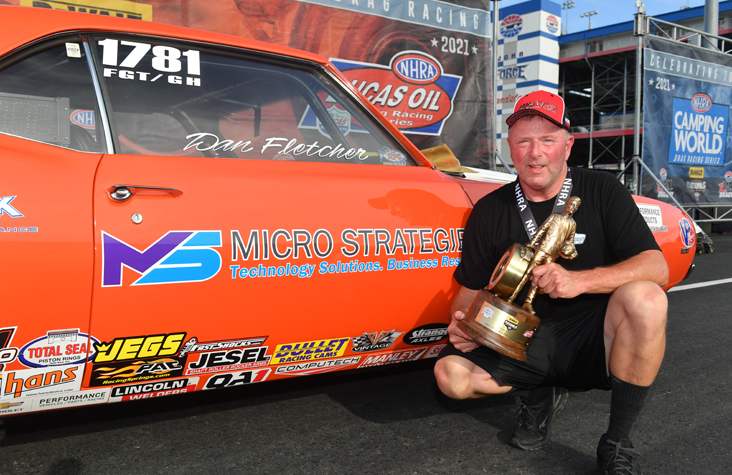 Fletcher seemed to get to 100 wins with relative ease, reaching the historic milestone in Chicago in 2017 when he won his lone title in the Super Street class. At the time, Fletcher joined an exclusive fraternity that included only John Force and Manzo. A short time later, David Rampy scored career win No. 100 and promptly announced his retirement.

Fletcher won two more times in 2017 and bagged two wins in 2018 but since then? Crickets.

Granted, doesn’t race as often as he used to. Fletcher's days of crisscrossing the country and racing in 20 or more national events are clearly behind him. There was also the whole COVID thing that interrupted everyone’s 2020 season and has lingered well into 2021. In Fletcher’s case, those would be convenient excuses but he’s not having any of it. If you want to know why he’s been winless for three years just ask him.

“I don’t even really know what to say. Many times I’ve asked myself, ‘What am I doing wrong?’ and the answer is I’m not doing anything wrong. I’ve just been in the wrong place at the wrong time,” Fletcher said. “Honestly, I think my driving has been lights out. I didn’t even realize I hadn’t won a race since 2018. I’ve got a couple of runner-ups including Indy last year. I drove a bad race in the final but I felt like I should have won.

“Recently, I told my wife, Donna, that If I thought I’d lost it and I sucked, I’d just acknowledge it and move on but that’s not the case. I feel like my mechanics are solid. My starting line and finish line strategies are good. My game plan is there, but the results haven’t been. I couple of times, I've been tempted to call Pete [Biondo] or Justin [Lamb] in as a consultant. But, I don’t feel like I’m doing anything wrong and when that happens, you just stay the course.”

Fletcher did stay the course and was rewarded in Charlotte with his landmark 105th win. Fletcher often bemoans his lack of racing luck, but he had plenty of it at zMax Dragway with a bye run and four red-lights against him in six rounds including the final against Herbie Null Jr. Fletcher’s only side-by-side race came in the quarterfinals against Jeff Lewis and that battle was won on the starting line when Fletcher grabbed a sizable advantage.

“No one ever red-lights against me and I had four of them this week and a bye run,” Fletcher said. “If I can’t win that I need to quit. This is pretty exciting. My wife is here. My daughter is here. This is my first win for [sponsor] Anthony Bongiovanni and Micro Strategies,” said Fletcher. “It’s been a while since I got one and I probably drove a lot better at other events than I did here today. There is just so much luck involved. The Lord blessed us today and we got through.”

Fletcher admits the sport has changed a lot since 1996. That’s the year he famously quit his job a Xerox in order to travel full-time and pursue his dreams of becoming a “professional” sportsman drag racer. Fletcher will be the first to tell you that the road has been tough, with many speedbumps and potholes along the way. He’s also willing to admit the rewards have been plentiful, including four world championships and the aforementioned 105 national event Wallys. To put that number in perspective, Peter Biondo and Edmond Richardson, two of the sport’s all-time greats, have combined for 98 victories.

“Like I said earlier, I’m driving as well as I ever have,” Fletcher admitted. “The problem is that everyone has gotten better and it’s just hard to win. It’s all about what the other guy or girl does. We’ve seen that garbage can win and excellence can lose. Most people can hit the Tree now. And a lot of guys hold [E.T.]. I’ve had a lot of people drop really hard before the finish line and you’ve got to account for that.”

With win No. 105 safely tucked away, Fletcher is obviously focused on breaking the tie with Manzo and earning win No. 106. His next shot to do that should come next month in Bristol, a track where he’s previously scored wins in 2001, 2011, and 2015. Fletcher will obviously take any win, but given a choice he’d also love to win in Super Stock, behind the wheel of his prized ’69 Camaro.

“I’m glad I tied the record in my dad’s car and I’d sure like to surpass Frank in dad’s car,” said Fletcher. “It’s actually an honor to tie Frank. I’ve known him forever and he came over to the winner’s circle in Charlotte and said, ‘Hey, we’ve got 210 wins right here.’ Tying Frank was wonderful but I’m just glad that I got to win something.

“Obviously, I wouldn’t still be out here if I didn’t have a lot of support from people like Anthony Bongiovanni at Micro Strategies, ATI, VP Fuels, Mickey Thompson, Denso, Holley, and Chip Lofton at Strutmasters. Hopefully, I can reel off a couple more and get this done quickly.

So after he gets number 106 what’s left for Fletcher?

“Not a lot,” he says. “I’m probably down to about ten national events a year now. I can’t do the 18-20 that I used to. Otherwise, I’d still like to win in Top Dragster and or Top Sportsman just to add another class. I’ve tried some Top Dragster but that’s on hold for now. It’s just too hard to win in a slow car. Mostly, I’m just worried about trying to win the next race. That’s my biggest goal.”