It isn’t an accident that Amanda Boicesco’s dragster carries the No. 11 that signifies that she’s the reigning NHRA Division 1 Super Comp champion. During the COVID-shortened 2020 season, Boicesco overcame a slow start to win a pair of Lucas Oil Series events on her way to her first championship in the ultra-competitive Northeast Division. She finished with 363 points, leading a huge field of contenders that included Daniel Bisbano and Shawn Fricke, who tied for second place. 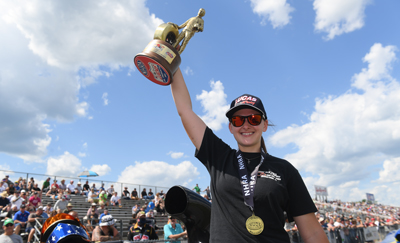 It didn’t take long for Boicesco to validate her championship. In her first appearance of the year at a national event, she went the distance with a strong six-round performance that included a nearly perfect 8.908 to beat three-time Comp champ Frank Aragona Jr. and a .004 light in her semifinal win against Ken Moses, who doubled up at the 2019 Epping race.

The final round was memorable, not only because it was just the 15th time that two women have raced in a national event final, but also because it was a darned good drag race. Paired with past Indy winner Heather Fetch, Boicesco left first with a strong .009 light and sealed the win with an 8.94.

A few minutes later, Boicesco watched as her father raced in the Super Gas final but the dreams of a father-daughter winner’s circle will have to wait for another day as Iggie’s Corvette developed a mechanical issue, and he finished second to 2016 World Champ John Labbous Jr.

Afterward, Boicesco’s first thought was her father, the 2006 Super Gas world champ. Iggie Boicesco also has nine national event wins, including two at the U.S. Nationals. Needless to say, he's passed on much of his knowledge and experience to his daughter.

“My dad is amazing,” said Boicesco in her post-race winner’s circle interview. “Nobody understands what he goes through to win. He’s 71 years old and he’s just as good as when he was 20. He works harder than anyone I know, and he will do whatever it takes to win. I grew up in a house full of Wallys, so I had a lot to look up to.”

The significance of racing an all-female final also wasn’t lost on Boicesco. For the record, there have now been 16 all-female finals but it remains a fairly exclusive sorority that includes Shirley Muldowney, who beat Lucille Lee in NHRA’s first all-female final at the 1982 Atlanta race. Three years ago, Deborah DiGenova topped Rebecca Miller to win the Top Dragster title in Epping and earlier this season, Rachel Meyer's two Top Alcohol Dragster wins have come against Jackie Fricke and Karen Stalba.

“I’ve looked up to Heather since I was a kid. She and my dad both won Indy in 2006 and she’s always been my idol,” said Boicesco. "Running her in the final was just the ultimate. I knew she was just eight total [.008 package] in the semi’s and I knew I had to make some magic happen. I felt like I hit the tree pretty good but for some reason, I couldn't get there so I let her go. When you can’t get there that’s your only choice.”

With a division title and a second national event win safely tucked away, Boicesco now looks ahead to loftier goals, perhaps even a Lucas Oil Series world championship.

“A Division 1 championship was always my goal,” said Boicesco. “I always wanted it. Winning the world would be the next step. I guess that’s the plan.”