Dan Fletcher is quick to admit that the odds of him catching John Force for the NHRA win record of 155 races (and counting) are slim and none, but he’s known for quite some time that second-place Frank Manzo, who retired with 105 victories, was well within reach.
27 Sep 2022
Kevin McKenna, NHRA National Dragster Senior Editor
The Sports Report

Dan Fletcher is quick to admit that the odds of him catching John Force for the NHRA win record of 155 races (and counting) are slim and none, but he’s known for quite some time that second-place Frank Manzo, who retired with 105 victories, was well within reach.

It took Fletcher a bit longer than he would have liked, but after winning the Stock title at the Betway NHRA Carolina Nationals, Fletcher now has 106 national event wins, and he’s in sole possession of the No. 2 spot. 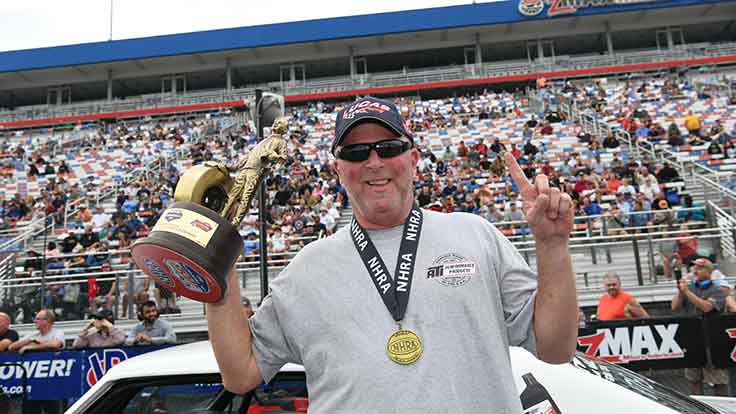 “I know this might not be a popular opinion, but I honestly never really thought about it,” said Fletcher, who also won No. 105 in Charlotte, a year ago. “The whole numbers thing doesn’t really bother me. It’s nice just to win a race.

“My story hasn’t changed much in the last 25 or 30 years. I’m more worried about paying the rent and keeping the ship afloat than I am about numbers. I’m much more consumed with the daily things that it takes to keep rolling.”

Fletcher has won at least one national event at 23 different facilities, but few have been as rewarding as zMax Dragway, where he has five previous victories between the spring and fall events. Since the native New Yorker now makes his home in Selma, N.C., zMax is also his new home track.

“This was a first. I’ve never won a national event and then pulled into my driveway at 8 p.m.,” Fletcher joked. “Honestly, the joke is that it’s taken me this long to do it. It’s not like I’m terrible. I like to think I’m still pretty good at this, but these days, so is everyone else. In the first four races this year, I got cracked in the first round, and all of my opponents were .00-something on the Tree. It’s just brutal.”

In Charlotte, Fletcher went back to a tried-and-true combination, entering his matching ’69 Camaro entries in both Stock and Super Stock. That’s a combination that has suited him very well over the years, but not so well lately.

“My Camaro Stocker has been a problem for two full seasons now, and I think it boils down to a set of heads that were probably bad castings,” said Fletcher. “We’ve had the engine out of the car a minimum of six times.

“Then, with my dad’s [Super Stock] car, we swapped an LS [engine] with a Powerglide, and I knew it wasn’t the way to go. We finally got a three-speed in that thing for the first time a couple weeks ago [at] Maple Grove [Raceway]. I usually don’t get lost. I don’t typically change enough stuff to get lost."

In Charlotte, Fletcher suffered what he calls one of the most embarrassing losses of his career in Super Stock when he got tangled up in a messy double breakout against Austin Alvey in round two. Angry with himself, he buckled down and finished the job in Stock, winning the final after Mitch Kight fouled in the final. 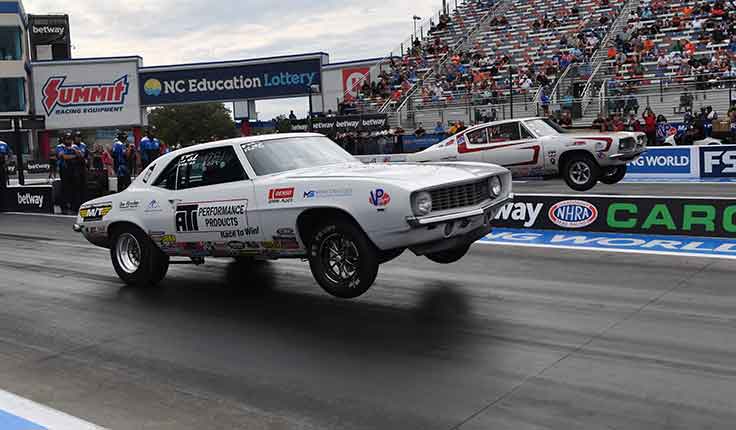 “I made the worst run of my life in Super Stock,” Fletcher said. “I was so upset that if I hadn’t had a bye round on the next round of Stock, I might have just packed up and left. I had about eight or nine hours to think about it, and then we had to come back and run the last two rounds on Sunday. Thankfully, I caught a break in the final. If he [Kight] has a .020 or better light, I’m all done.”

Fletcher maintains his stance regarding numbers but does acknowledge that he could get to as many as 120 wins before he finally calls it a career. He no longer spends nine months criss-crossing the country competing in the bulk of the NHRA Camping World Drag Racing Series national events, but still races enough to be effective.

“I have to keep going because Greg Anderson [with 100 Pro Stock wins] is breathing down my neck,” Fletcher said. “I’d certainly like to get to 120, but I don’t know if I’m going to race enough to do that. I have a lot of great support from ATI, Micro Strategies, Mickey Thompson, Denso, VP Fuels, and the Peak Squad, but I’m also trying to be smart when it comes to planning my schedule. It’s a shame that I now have two cars I feel I can win with, but I’m done for the year as far as national events go. I’m blessed to have the support that I have, but I just don’t have it in me to go out West right now. The plan would be to get everything ready for Gainesville next March.”