Luke Bogacki has crested the 700-point mark for the second time in his career following his Super Gas win in Brainerd, and he’s built a massive lead in the race for the championship.
24 Aug 2021
Kevin McKenna, NHRA National Dragster Senior Editor
The Sports Report

As baseball Hall of Famer Yogi Berra once famously said, “It ain’t over till it’s over,” and in the case of the NHRA Lucas Oil Drag Racing Series Super Gas world championship; it's over.

Over as in finished.

Done deal, or at least very close to it.

Barring the sort of miracle we haven't seen since the U.S. Men's Hockey team won Olympic Gold in 1980, Luke Bogacki, already a two-time Lucas Oil Series world champion, is almost guaranteed to add a third title following his latest win in Brainerd. Bogacki drove his This is Bracket Racing Elite Corvette to a final-round win over Dale Evens, and the victory boosted his points total to a robust 702, giving him a massive lead in the championship standings.

Mathematically, the title isn't clinched, so Bogacki hasn't yet been fitted for a tuxedo. 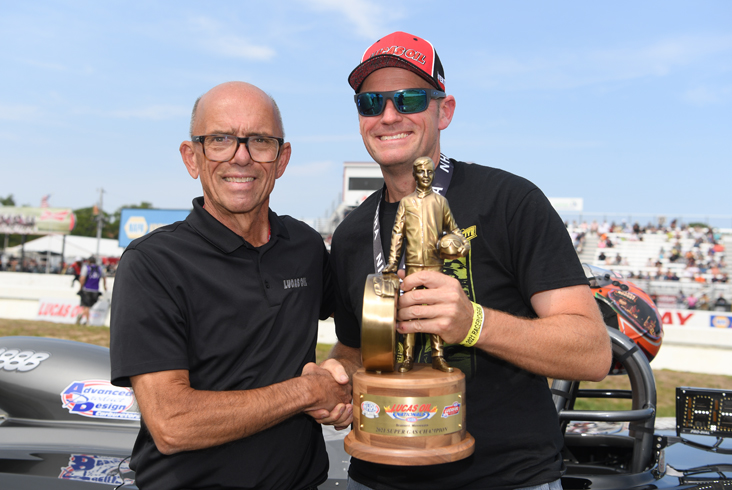 “I wouldn’t say it’s done,” Bogacki said. “At this point, there are two ways to look at it. If anyone is going to pass me, I’d expect it to be someone like [second place] John Labbous, so I’m not counting anything yet. On the other hand, if I were to be the first to score over 700 and not win the championship, I’d be pretty proud of that as well.”

Of course, Bogacki might not be done earning points. He still has two national events in which to better a round-three finish, and he’s got two chances at divisional events where he can better a semifinal finish. With another win, he could top the 750 mark, or at least better his own personal record of 731 points in 2014, the year he won his first Super Gas world championship. Bogacki plans to skip the Dodge//SRT NHRA U.S. Nationals and will return to action at the national events in Bristol and St. Louis.

Bogacki has been one of the sport’s best E.T. bracket drivers and one of NHRA’s best Super class racers for more than a decade, so this level of success is not unexpected. This year, he had an inkling that he’d be competitive once he rolled out his new Charlie Stewart Race Cars built Corvette. Bogacki claims it’s the best Super Gas car he’s ever driven, and his results, including national wins in Brainerd and Atlanta to go with his Lucas Oil Series titles in Dallas and Norwalk, seem to bear that out.

“There was nothing that led me to expect success at this level, but this is by far the best car I’ve ever had,” Bogacki said. “Nathan Martin has worked with Charlie, and they re-designed the back of these cars, and now I’m driving a car that runs 170 mph but feels like it’s capable of handling much more than that. In this car, I’m every bit as comfortable as I would be in a dragster. You can concentrate on a lot of things when you’re not worried about going from A to B.”

In Brainerd, Bogacki went to the semifinals of the Lucas Oil Series event held on Thursday before dropping a tough race against Jim Capp. Bogacki then watched as Labbous, his closest rival, defeated Capp in the final, closing the gap in the points battle, at least temporarily. 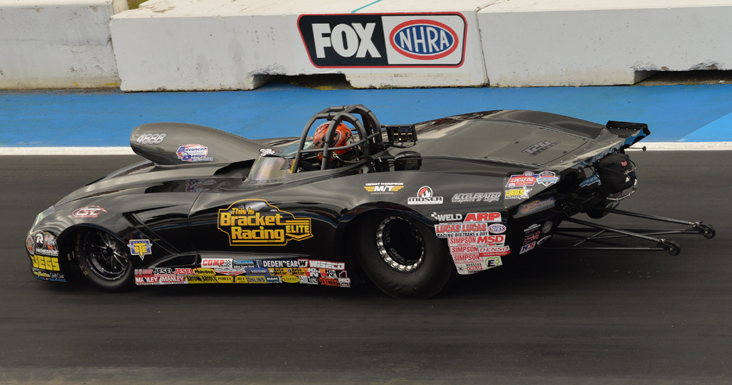 “When I lost in the semi’s, I wasn’t too concerned, but I would have preferred that someone other than John win the race,” said Bogacki. “It’s nothing personal. In fact, we’re good friends. Then, at the national event, we ended up on opposite sides of the ladder, and I thought there was a chance we’d run in the final. When I left home to go to Topeka and Brainerd, my goal was to come home with over 650 points because that’s usually enough to win this deal more often than not. Once I got to the late rounds of that national event, that total was going to be closer to 680, but that still might not have been enough. Right now, John would have to win three out of his last four events to pass me, but if there’s anyone who can do that, it’s him.”

Technically, Bogacki could become the first Sportsman (non-alcohol) racer to top 800 points if he were to win his last three events this season. Admittedly, that’s a big longshot. He does, however, acknowledge that he’d like to earn enough points to break up the monopoly currently held by Peter Biondo, who has the record for the sport’s three highest point totals of 792, 765, and 743.

“Peter and I joked about that recently,” Bogacki said. “He wished me good luck but said, ‘Just don’t beat my top three scores.’ Honestly, I’m not that concerned about it. I’d obviously just like to score enough points to win the championship, no matter what the score is.”