After years as a successful crew chief, Ryan Priddy is finally getting his shot at the big time in Comp eliminator, and so far, he’s making the most of it.
14 Apr 2022
Kevin McKenna, NHRA National Dragster Senior Editor
The Sports Report

To suggest that Ryan Priddy’s Comp victory at the recent NHRA Four-Wide Nationals in Las Vegas was a long time coming would be a big understatement. Priddy is best known for his role as a longtime crewmember for the SoCal-based Mountain View team, but he also sports a solid driving résumé that includes five NHRA Lucas Oil Drag Racing Series wins and, now, a national event Wally.

Priddy never doubted his ability to win a national event. He just needed to wait for the right opportunity.

“Thankfully, the Mitsos family has trusted me to drive this awesome Comp car, and I’m glad that we finally put all the pieces together to get it into the winner’s circle,” said Priddy, following his final-round win over Doug Lambeck in Las Vegas. “Obviously, this is a really good car. I just needed to not screw it up. I tried to do just that a couple of times, but we got it done, and I couldn’t be happier for Nick and Irene Mitsos and the rest of the family. It’s so cool to win a race with them.

“With the Vegas win, I don’t even know where to start,” Priddy said. “It’s pretty awesome. I was a runner-up in Top Sportsman a while back [2015 JEGS SPORTSnationals], and I had a semifinal in Super Comp years ago. So, yeah, I’ve been waiting a long time to finally win a national event.”

In spite of his reputation as a crewmember, Priddy has plenty of experience as a driver. He’s raced both a six-second Top Dragster and more recently drove the Mitsos family’s COPO Camaro in the Constant Aviation NHRA Factory Stock Showdown. He’s also an accomplished bracket racer who can hold his own at big-money events. For all his previous experience, Priddy is quick to admit that his current A/Altered Camaro is an entirely different animal. The Jerry Haas-built Chevy features a 730-cid Chevy/Hemi hybrid that was originally built by the late Sonny Leonard. Currently, the car is tuned by cylinder-head specialist Erik Jones with the help of FuelTech’s Luis de Leon, as well as Jeff Jacobs and David Beckley of Mountain View Performance.

“For something that runs sixes at over 200 mph, this is a really smooth car,” he said. “It drives like a Cadillac; It’s not out of control at all. That being said, it pulls thee Gs on the launch, and it really gets your attention when you pull the chutes. I’ve gotten into some pretty good tire shake with it, but I think we’ve got that under control now, but honestly, I’m very comfortable in it.”

Priddy believed he was bringing a competitive car to the NHRA Four-Wide Nationals, but a few issues during qualifying may have tempered his expectations.

“On our first qualifying run, we had an issue with the transmission, and then we had an issue with our EFI, where a file got corrupted. Somehow, it added a bunch of timing, and I thought we burned the engine up. That wasn’t the case, but I wasn’t sure exactly where we stood going into eliminations.”

The key to success in Comp is avoiding a potentially disastrous Competition Index Control (CIC) infraction, and Priddy was able to do just that, reaching the final with his 7.22 index intact. At the same time, he was well aware that opponent Lambeck had lost a full tenth, giving the Mountain View team a decided advantage.

In the final, Priddy was ultimately a little later on the starting line than he wanted to be (.079), and he stayed on the gas a bit longer than necessary, running a (-.617) 6.603, but the win light shone in his lane, which was the only thing that mattered at the time. 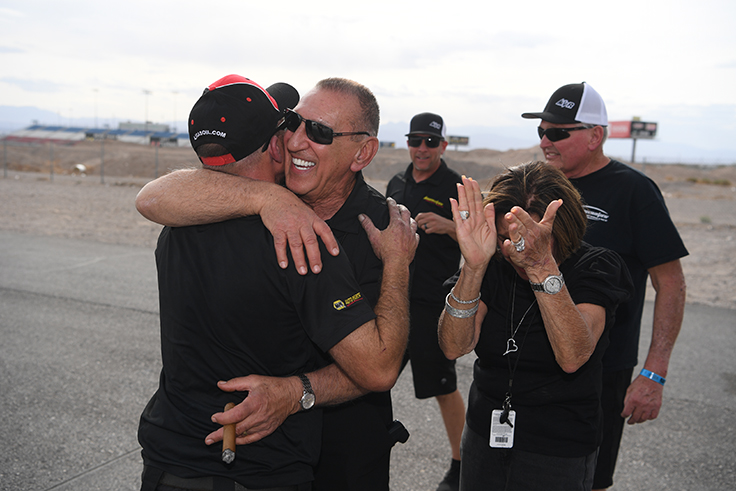 “Doug is awesome racer, but I think I was more calm in the final than I was during qualifying, if that makes any sense at all,” said Priddy. “It also helped to have a clean index. I was a little mad at myself for taking a hundredth [CIC penalty], but it was worth it.”

One week after his breakthrough win in Las Vegas, Priddy went to the final of the Division 7 Lucas Oil Series event. As a result, he’s currently ranked No. 2 in the battle for the championship. Admittedly, he’s one of the early-season favorites to win the title, but there is much work left to be done.

“We’re just going to keep plugging along,” Priddy said. “We plan to go to Richmond with the Comp car and the Factory Stock car, so we’ll see how that goes. My No. 1 priority is still Paul and his Top Sportsman car. He’s got a new car coming, and we need to get it sorted out.

“There is still a lot left in this car; I just need to race a little smarter. It’s also hard to race against slower cars because I don’t catch them until 1,200 feet. No matter what happens the rest of the way, I’m happy. I can’t say enough about the opportunity that Nick and Irene have given me, and I owe a lot of thanks to everyone at Mountain View Performance, Fast Tires and Auto, Dave at Performance Transmissions, and our main sponsors, NAPA and Havoline.”