To suggest that the last two weeks have been good to David Barton would be an understatement. Following the NHRA tour to stops in Charlotte and Houston, Barton picked up a pair of Wallys, but did so in a most unusual way. He cashed in Charlotte in Comp eliminator and then made the long drive to Houston for the Mopar Express Lane NHRA SpringNationals, where he claimed the Constant Aviation Factory Stock Showdown title.

And, he won both races with the same car. 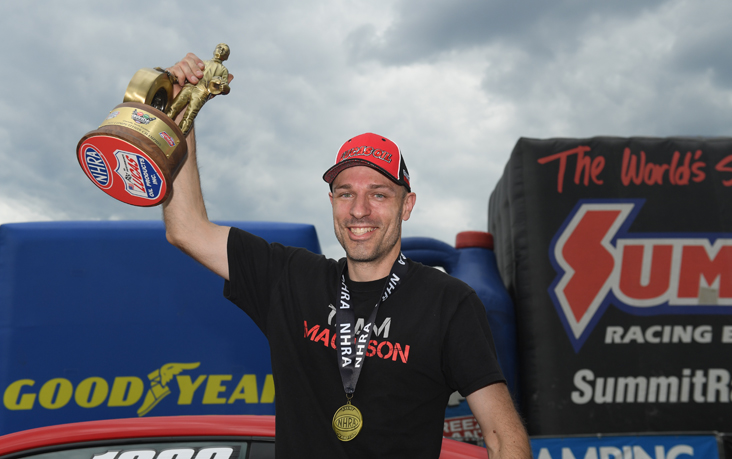 The supercharged Sawmill Auto/NGK COPO Camaro that Barton drives was built to run in the Factory Stock Showdown, but it also happens to fit nicely in the FS/AM class, a recent addition to Comp eliminator specifically for Showdown cars. Barton admits his main reason for going to Charlotte was to test in advance of the Houston race, but once he arrived at zMax Dragway, he got a bit more serious about winning.

“I mainly wanted to go to Charlotte because I race a Super Stock car for the Cook Bros., and they really like that race,” Barton said. “Then, we thought, ‘Why not bring along the Showdown cars?’ We struggled in Gainesville because the track wasn’t what we expected, so it made sense to test. I really just showed up right place at right time. And, I didn’t do anything silly.”

The Comp class has long been nicknamed “Complicated Eliminator” by drag racing insiders, and that wasn’t lost on Barton, who was making his debut in the class and laughingly admitted that he wasn't totally certain how the Competition Index Control system worked. Using a combination of solid reaction times and consistent runs, he made the final round, where he beat Joel Warren, who fouled.

The major difference between Comp and Factory Stock is the Christmas Tree with Comp using a full Tree and Factory Stock running off a Pro start. That also wasn’t much of a concern for Barton, who has extensive experience with both disciplines, in fact, he prefers the full Tree.

“I think I can go back and forth pretty well,” he said. “You just have to pay close attention to what you’re doing. I still think I’m a little better on the full Tree, and my lights in Charlotte were decent. Maybe that’s just because I didn’t have any pressure on me. I certainly wasn’t expecting to win by any means.”

Barton had previously won numerous Factory Showdown events and the Dodge Hemi Challenge, but the Charlotte Comp Wally represented a milestone in his career. 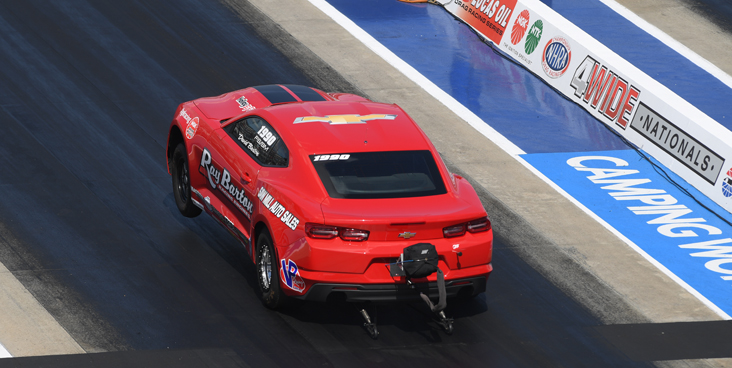 “I try to go to every race thinking I’m going to win, but it really never crossed my mind in Charlotte,” Barton said. “We sort of learned what we were doing as we went along. I know you have to win the round without taking any more [finish line stripe] than you need to, but I didn’t know how much index I could lose. I just sort of surprised myself, and I also had some luck getting lined up next to guys who’d already lost a lot of index. Bruno [Massel] was the No. 1 qualifier, and he had problems, and [three-time champion] Frank Aragona red-lighted. That sort of opened the door for me. Honestly, I beat Richard Preiser in the quarterfinals, and I didn’t’ realize he’d been leading the points.”

Five days after his win in Charlotte, Barton rolled into Houston Raceway Park for event No. 2 in the Constant Aviation Factory Stock series. The rules for both classes are identical, so the only change made between events was Barton’s official competition number. Critical items such as minimum weight and supercharger pulley size are the same. That proved to be an added bonus because Factory Stock racers got just one qualifying pass due to rain.

“On the first run, I used a tune-up that I know will go down any track,” Barton said. “Then, we stepped it up in each round. The track in Houston was actually very good, so we were able to give it more and more each round.”

Barton outran Mark Pawuk and Kevin Skinner to reach the semi’s, where he used a slight holeshot to stop Jesse Alexandra. That set up a huge final-round match with reigning champion Aaron Stanfield, who was riding a six-race winning streak that began last July. Knowing he’d likely need something special to halt Stanfield’s 28 round-win streak, Barton opted for the most aggressive tune-up in his arsenal for Monday’s final and was rewarded with a 7.79 that was low elapsed time of the event and held off Stanfield’s close 7.81. Riding a nine-round winning streak of his own, Barton was rewarded with his second Wally in eight days. 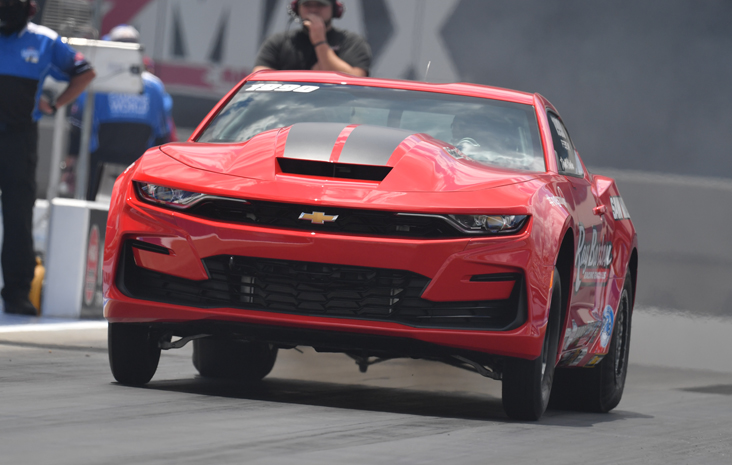 “When we got to the final, I looked at my logbook from last October and set the car up the same way as it was the last time we raced in Houston. When it’s right, this car leaves so nice with 100-foot wheelies, and the 60- and 330-foot times are awesome. My hat is off to Stanfield for winning so many rounds in a row. He’s the toughest guy I’ve ever faced. Last year, we ran him a bunch, and it seemed like he was always a hundredth or two quicker. We lost some close races.”

With the win, Barton became the first Factory Stock racer to cash in on Constant Aviation’s just-announced bounty program. Since Stanfield won in Gainesville, Barton pocketed an extra $1,000 for winning the final.

“How’s that for timing?” Barton laughed. “It feels good to be the first one to collect a bounty. I still feel like I’m dreaming, especially after we’ve had our ass handed to us the last two years. I hope we can keep this momentum going.”

Barton admits that the Factory Showdown remains his top priority, but he’s also taken a liking to Comp and plans on entering the Division 1 NHRA Lucas Oil Drag Racing Series race this weekend at his home track, Maple Grove Raceway.

“Now that the Showdown cars are going 7.80s, we can be competitive in Comp,” Barton said. “Now that I’ve got a taste, I want to do more. Reading is 15 minutes from the house, so we’d be crazy not to try it.”