The Sports Report: Kent Hanley joins the “near double” club in Atlanta

Kent Hanley became the latest driver to nearly double up at an NHRA national event when he drove to a win in Super Stock and a runner-up finish in Super Comp at the Lucas Oil NHRA Southern Nationals.
06 May 2021
Kevin McKenna, NHRA National Dragster Senior Editor
The Sports Report

The list of drivers who have doubled up at an NHRA national event remains fairly small; currently, there are just 26 members of that exclusive fraternity, and the feat has been accomplished just 42 times in more than 1,000 events over NHRA’s 70-year history. Much like a perfect game in Major League Baseball or a hole-in-one on the PGA Tour, a national event double is indeed a rare feat that can elude even some of the sport’s best drivers. 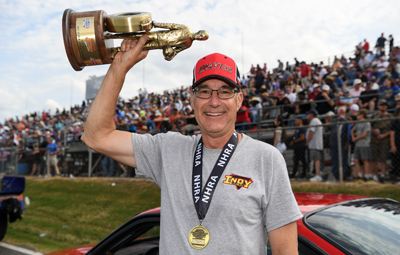 Following last weekend’s Lucas Oil NHRA Southern Nationals, no one knows that better than Kent Hanley, who came tantalizingly close to joining the double-up club when he drove to both a win and a runner-up finish within moments of each other. Hanley lost the Super Comp final but quickly rallied to earn his fourth national event Wally by claiming the Super Stock title. Following a long weekend that included 11 wins in 12 elimination rounds, Hanley had few regrets.

“It’s a great day,” said Hanley. “You can’t complain when you at least win one of them. I mean, Chuck [Trotter] put up an unbelievable package in Super Comp. I missed the Tree, but I don’t know what I could have done with him anyway. We’re very blessed to win this. All the glory goes to God. Being in a position to double is pretty unique, and it's cool to be on that stage.”

Hanley was victimized by Chuck Trotter’s virtuoso performance in the Super Comp final. Trotter, who accomplished a rare feat of his own by winning the Super Comp class in a door car (actually a door truck), left little room for Hanley with a .009 light and an 8.907.  Hanley missed the Tree a bit in the final with a .034 light, meaning he had no shot to unseat Trotter. 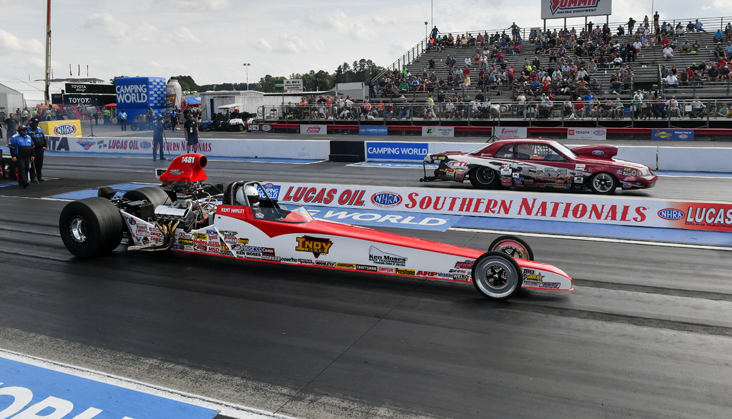 When Hanley returned a short time later to race Brett Candies in the Super Stock final, he quickly shook off the loss and put together a solid run that included a very competitive .016 light and a 9.434 on his 9.42 dial. Candies, the son of Hall of Fame Funny Car team owner Paul Candies, put up a good fight but broke out by four-thousandths in the loss.

Afterward, Hanley addressed the feelings that go with racing in a second final round so soon after losing the first.

“I don’t know if there’s pressure, I was just mad, you know. I guess I wasn’t really that nervous about it but just disappointed in myself for missing the Tree,” Hanley said. “I know I ran dead-on, but still missed the Tree. It is what it is. We got the win here [in Super Stock], and it was a great race. Congratulations to Brett for getting to the final. He drove a hell of a race as well.”

Although he came up a round short of his ultimate goal, Hanley’s feat remains impressive simply because Super Stock and Super Comp are two entirely different disciplines. Switching quickly from his Super Stock Cavalier to his Super Comp dragster requires the ability to quickly adapt to different surroundings. The challenge presented by racing on both a full and pro Tree clearly isn’t for everyone, but Hanley has been able to adapt just fine, largely because he’s a veteran that has been running NHRA events for the better part of four decades. 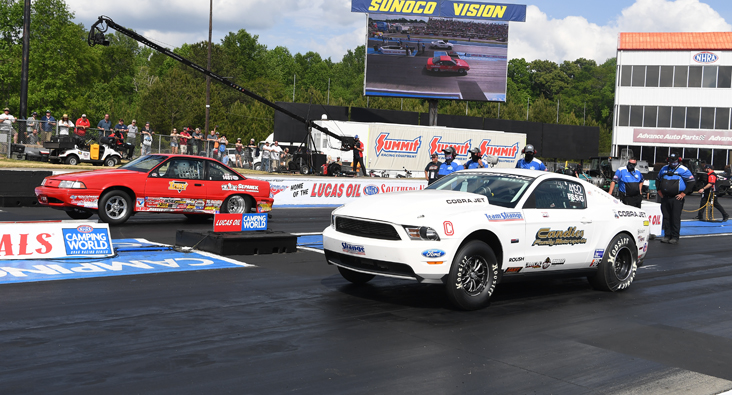 Hanley claimed his first NHRA win in 1994 when he won the Super Stock title in Reading. He’s since earned a pair of Super Comp victories at the 1998 Englishtown event and the inaugural event in Epping in 2013. He’s also got three runner-up finishes, so he knows just how difficult it is to close the deal once, much less twice during any given weekend. Hanley is also a Division 1 transplant who currently lives in Raleigh, N.C., so he has a connection with Atlanta Dragway, both geographically and emotionally.

“I was blessed to win the first [NHRA national event] at New England Dragway in Super Comp, so to close this [Atlanta event] out with a Super Stock win is really special,” Hanley said. “Any national event win is special, but this track is an unbelievable facility. I’m sorry to see it go, but this was a great event.”