The Sports Report: This time, the spotlight shines on Conner Statler

Stanfield racing crewmember Conner Statler has appeared in many winner's circle celebrations, but in Las Vegas, he accomplished a rare feat when he won the first national event he attended as a driver.
22 Apr 2021
Kevin McKenna, NHRA National Dragster Senior Editor
The Sports Report

As a valued member of the Stanfield Engines team, Conner Statler has been a part of many winner’s circle ceremonies. In 2020 alone, Statler helped his buddy Aaron Stanfield celebrate five straight wins in the Factory Stock Showdown class as well as the Division 4 Top Dragster title. He’s also shared the winner’s circle with Stanfield customers, including Arthur Kohn. 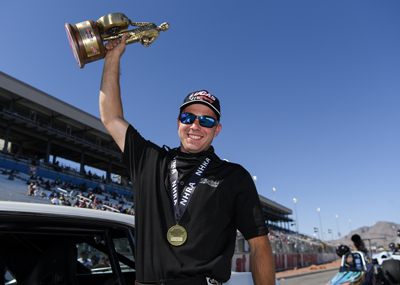 At the Denso Spark Plugs NHRA Four-Wide Nationals, the shoe was on the other foot as Statler’s teammates joined him in the winner’s circle as he clutched his first NHRA national event Wally after winning the Stock title. Adding to the moment, Statler defeated his boss and mentor, four-time world champ Greg Stanfield, in a final round that featured a pair of Chevy Camaro entries owned by Division 4 veteran Bobby Brannon. All of this came in Statler’s first-ever national event appearance.

“This was a way different experience than anything I’ve ever had before. I’ll definitely remember this forever,” said Statler. “To win your first [national event] is one thing, but to do it against someone like Greg with two cars owned by Mr. Bobby. That made it even more special. You don’t get many opportunities like that in a lifetime.”

Statler joined the Stanfield team via the highly successful SAM Tech School of Automotive Machinists and Technology program in Texas. Prior to that, he grew up in Pennsylvania and raced snowmobiles on dirt before turning to E.T. bracket racing. In 2019, he joined Stanfield’s team, and soon after got a chance to drive for Brannon, a longtime Stanfield Engines customer.

“After I graduated from SAM Tech, I worked with Archie [Kohn], and eventually Greg asked me to work for Stanfield Engines,” said Statler. “When we came out to Las Vegas at the end of 2019, I asked Mr. Bobby if I could drive his car at the Division 7 points meet, and I made it down to eight cars. Then I got to drive for him last year, and we won the points meet in Tulsa [Okla.]. I just never got to run any national events until this season.”

In his national event debut in Las Vegas, Statler was solid throughout eliminations, especially on the starting line, where his reaction times were all competitive. Save for the final, his most memorable round came in the quarterfinals, where he faced Steve Wann in a heads-up, no-breakout battle. Wann’s ’62 Fury is perhaps the most feared A/SA entry in the country, and Statler and crew didn’t take him lightly. The battle that many expected never materialized when Wann fouled at the start.

“That round brought a big smile to my face, probably just as much as the final,” said Statler. “It was one of those rounds where I was for sure an underdog. We did everything to the car that we could do. We pulled all the [extra] weight out, chilled it, and changed the oil. I’m still not sure I could have run with him. I just wanted to make it as close as I could. The winner got a bye to the final, so afterward, I was able to take a deep breath.”

The final round was both a best- and worst-case scenario for Statler. On one hand, he got to race against his boss and mentor, but there was also the intimidation factor that goes with racing against a four-time world champion who is still at the top of his game. Statler expected a tough race but ultimately got what amounted to a victory lap after Stanfield fouled by four-hundredths. 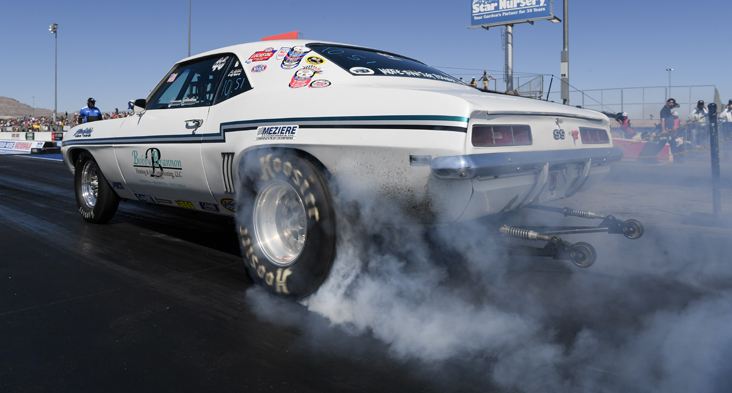 “I was a little bit surprised he went red,” said Statler. “I saw it come on and then said to myself, ‘I guess it's time to go now.’ I have so much respect for Greg and the whole Stanfield family. When Greg tells me to do something, I do it. Obviously, he’s very successful, and I wouldn’t be where I am right now without Greg and Aaron and our whole team. They are a huge part of the little bit of success I’ve had.”

Last year, a combination of a heavy work schedule and the COVID-19 pandemic prevented Statler from racing in any national events, although he did get to attend nine NHRA Lucas Oil Drag Racing Series divisional events. This year, that figures to change, especially because he’s off to a fast start and has a very legitimate chance to finish in the Top 10 or possibly contend for a championship.

“The plan right now is to race a few national events and go for it,” said Statler. “We’re going to Valdosta [South Georgia Motorsports Park] for the Division 2 race and then to Atlanta. We’ll also focus on Division 4 races and see how it works out. I have so many people to thank for this that I don’t even want to name them all because I know I’ll leave a few out. I just hope they know how much I appreciate their support.”