The Sports Report: Back on the winning track

Absent from the winner's circle for nearly three years, Joe Santangelo came back in style with a near double at the Virginia NHRA Nationals
22 May 2019
Kevin McKenna, NHRA National Dragster Senior Editor
The Sports Report 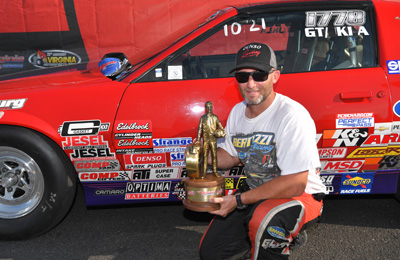 Most racers, even the ones who win a lot like Dan Fletcher and David Rampy, can’t help but wonder if their latest win might be their last. As much as all successful racers have an abundance of self-confidence, the realities of NHRA racing in the Lucas Oil Drag Racing Series are that competition is keen, and even the very best drivers need an occasional bit of luck to earn a coveted Wally trophy. Following his most recent win at the Virginia NHRA Nationals, no one knows that feeling better than Joe Santangelo II.

In the summer of 2016, Santangelo went on a tear with back-to-back wins in Epping and Norwalk, one in Stock and the other in Super Stock. After that? Crickets. He didn’t make it to another national event final until Bristol in 2018 and he lost that race to Eddie Longhany. Santangelo had another shot to break the drought earlier this year in Charlotte but came up short in the Super Stock final against Monty Bogan. A consistent winner throughout his career and the 2011 Stock national champion, Santangelo finally claimed national event No. 15 after delivering the Super Stock title in Richmond. He just missed a rare double when he drove Anthony Bertozzi’s wheelstanding ’69 Camaro to the semifinals in Stock. 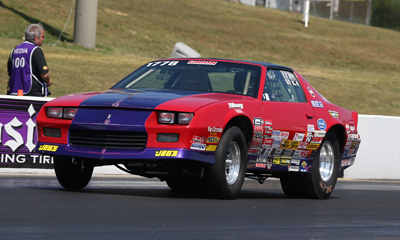 “I can say did my best, almost; I really wanted to wrap it up in Stock,” Santangelo told NHRA announcer Joe Costello during his post-race interview. “Wallace Dent did a great job. The numbers worked his way. I had my chance to get two. I’ll do it again at some point. I’ve got to thank Anthony Bertozzi. He lets me drive his ’69 Camaro. Winning these races is fun, but there is nothing more fun than driving that ’69 Camaro. I’ve driven a lot of cars and I’ve got a lot faster but there is nothing more fun. I pulled second gear and it went straight up in the air. I know anyone who is a car guy would probably love driving it.

“My dad [Joe Sr.], thank you very much. I travel for work and I’m gone eight months a year. I don’t’ get finished until maybe a week before racing season starts. He puts two cars together by himself. He’s got a little bit of help with some friends buy my dad works his butt off. I do well with these two cars. I’m a devent driver I’m really good at surrounding myself with people who are smarter than me. My dad has been doing this a long time. Anthony, everyone knows him. He wins more than me. I’m just luck I get to do this.” 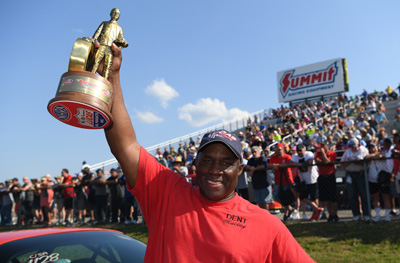 The best of the rest: A first-time winner was crowned in Stock when Maryland’s Wallace Dent Jr. crossed the finish line ahead of Joe Lisa in the final round. Dent, wheeling his C/SA Camaro, began his season at the Division 2 Lucas Oil Series event in Gainesville in March and hadn’t run another NHRA event until Richmond. He quickly made up for lost time with a strong performance that included wins against Phil Lankford, Raymond Skipper, Jeff Longhany, and Super Stock champ Santangelo, who came up just two rounds short of a double. Dent’s most impressive performance came in round three where he used a .009 light to help get past Longhany. In the final, Dent gave up a slight lead at the start against Lisa’s E/SA Camaro but managed to inch ahead at the finish line to win by .002-second.

Following a season where he finished No. 6 in the national standings in Super Comp, Chris Garrettson achieved another milestone in his career by winning his first national event title. Garrettson races in an unconventional manner by running the 8.90 index at a deceptively slow speed. While many of his competitors are topping 175-mph, Garrettson’s dragster typically hovers in the low 130-mph range, making it difficult to judge at the finish line. His strategy worked to perfection in Richmond where he stopped Colby Fuller in the final, 8.905 to 8.914. Garrettson’s top speed was just 133 while Fuller chased him at 175. Throughout eliminations, Fuller never ran faster than 134-mph in his wins against national champ John Labbous, Randy Midgett, past Gatornationals winner Frank Altilio, Daniel Bisbano, and Jacob Otto. In order for Garrettson’s strategy to work, he must be sharp on the Tree, and he was with a string of consistent lights between .019 and .025.

Super Gas champ Tom Goldman’s second-career victory evoked memories of Old Bridge Township Raceway Park in Englishtown, N.J., where he won his first national event title in 2013. After he defeated Michelle Furr in the final round with a nearly-perfect 9.909, Goldman didn’t’ need to be reminded that the Virginia Motorsports Park event replaced Englishtown on the NHRA calendar two years ago. No matter the venue, Goldman was tough to beat with his ’58 Corvette roadster. Highlights from eliminations included a pair of great .008 and .007 lights as well as a 9.906 to 9.892 win against six-time Division 1 champion in the semifinals. Furr nearly claimed her fourth national event title before a breakout in the final round. She used a 9.915 in the quarterfinals to earn a bye into her seventh national event final. 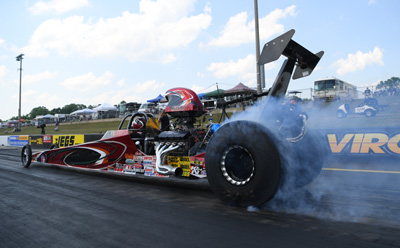 There was another first-time champion crowned in Top Dragster presented by Racing RVs.com after Chad Traylor turned on the win light in the final against Junior Houston. That was no easy feat after Houston cut a perfect .000 light but Traylor was able to win with a 7.209 on his 7.19 dial after Houston broke out by five-thousandths. On his way to the final, Houston made several notable runs including a .013-second package that helped defeat Barry Brown in the second round and an even better run in the quarterfinals with a .010-second total that was impossible for Chad Brown to overcome in spite of a competitive .011 reaction time. With the 2019 season barely started in the Northeast Division, Traylor’s Richmond win came in his season-debut in the Top Dragster class.