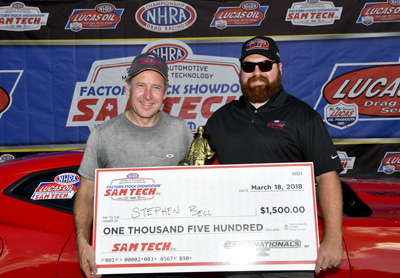 Stephen Bell knew early on that it was going to take a herculean effort to achieve success in the School of Automotive Machinists and Technology NHRA Factory Stock Showdown which is precisely why he hired four-time Super Stock national champ and longtime Pro Stock racer Greg Stanfield to run his COPO Camaro program. Since the end of the 2017 season, Stanfield, has worked almost non-stop to prepare the team’s two Showdown entries, one driven by Bell and the other by Stanfield’s 23-year old son, Aaron.

Bell’s foresight as a team owner and Stanfield’s efforts as an engine builder and crew chief paid off handsomely at the Amalie Motor Oil Gatornationals in Gainesville. Bell and Aaron Stanfield met in the final round of the season-opener. Stanfield left first by nearly a tenth in the final, but that was the last thing that went right for the up-and coming third-generation racer. Almost immediately, Stanfield’s car spun the rear tires and Bell, who hadn’t made anything less than a clean run all weekend, finished the job with an impressive 8.176, 167.47.

For Bell, the Gainesville win was obviously a great way to start the 2018 season, but it also helped take the sting out of a disappointing end to the 2017 season when his Camaro had an encounter with the guard wall in St. Louis. Bell wasn’t hurt, and his car wasn’t severely damaged, but it wasn’t exactly how he envisioned ending an otherwise promising season. To come back five months later and claim his first win in the popular series was more than he could have hoped for.

“I don’t even think we could have drawn it up that well if we tried,” said Bell. “Last year, we thought we hit on something before Indy and then we went to St. Louis and got tangled up with the wall. We thrashed all winter to get the car back together and we tried to test before Gainesville but didn’t have much luck. To be honest, my first real run was in Q1 in Gainesville. We also had this idea to build a second car. I had that 2015 COPO sitting around and we had enough hard parts to do four Showdown engines, so I told Greg, ‘Let’s put two cars together and go to Gainesville and Charlotte and see what happens'. Aaron is a great driver, so I knew he’d do well.”

For Bell, driving a low eight-second, 170-mph Factory Stock COPO is a thrill especially when one considers the challenge of applying more than 1,000 horsepower to the pavement on a nine-inch wide rear slick. To that end, Bell managed to avoid the tire slippage issues that plagued some of the top qualifiers including pre-race favorite David Barton, Kevin Skinner, and Joe Welch, the winner of the NMCA event a week earlier in Bradenton, Fla. Bell’s car got down the track on all seven runs including a best of 8.108 that was good for the No. 6 spot in the quick field. 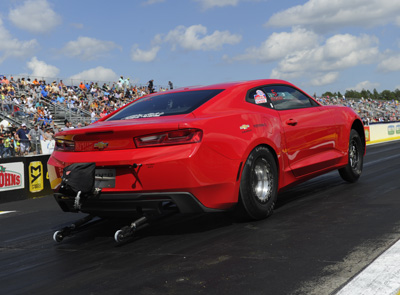 “We went to [South Georgia Motorsports Park] to test and Aaron’s car ran 8.05 and 8.08 right off the bat and my car wouldn’t go past the 330-foot cone,” Bell said. “The track was fast, but we didn’t know how we were doing in relationship to the guys who were testing in Bradenton and running much quicker. When we finally got to Gainesville, I was glad that my car went down the track every time. We pride ourselves on that. I won’t say we’re conservative, but we don’t get overly aggressive unless we have to be. Once you spin the tires, you’ve wasted a run. You don’t get any information and you’ve almost certainly lost the round if it happens in eliminations.”

Stanfield reached the final round when he stopped Randy Taylor on a holeshot, 8.186 to 8.179, and Bell joined him in the final a few moments later when he downed Leonard Libersher, also on a holeshot with an 8.167 to 8.142 victory. Bell was the first Stock Eliminator driver to top 170-mph, a feat he achieved at the Division 4 National Open at No Problem Raceway Park in Belle Rose, La. He is also one of just a handful of Super Stock racers to did into the seven-second zone, but the Gainesville win was clearly the highlight of his career.

“When I saw Aaron win on a holeshot ahead of me I had a quick talk with myself,” said Bell. “I knew the only think keeping both of us out of the final was me. I just had to concentrate on doing my job. Our cars ran so close we decided to leave both of them alone and just go race. I had been to a couple of finals before but hadn’t won a race so this was on my bucket list.”

Bell was so focused in the final, he didn’t realize that Stanfield had brought the crowd to its feet with a savage burnout that almost completely fogged in the Gainesville Raceway starting line.

“I actually thought all the smoke was from my burnout,” Bell laughed. “It all happened so fast. I was caught up in the moment.” 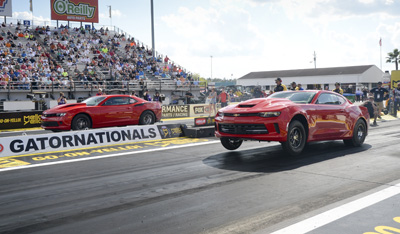 Leaving Gainesville as the No. 1 and 2 ranked drivers in the class, Bell is now prepared to field two cars at all seven Factory Showdown events this season. While he admits that his season could not have started any better, he’s also aware that the competition is only going to get tougher as the season goes on. A lot can happen in the next six events.

“Right now, I’d say that David Barton is still the class of the field,” said Bell. “I also know the Dodges have a lot of potential Kevin Helms [crew chief for DSR’s Leah Pritchett] knows what he’s doing, and he’ll get that program up to speed in a hurry. You've also got some fast Fords with Chris Holbrook and Chuck Watson.  I think the fact that all three manufacturers are about equal says a lot about this class. I also think that it’s impressive to see what we do on a small tire. When you look at the computer graph on the car, its spinning the tires all through high gear. That’s part of what makes it cool. These are real production cars and I know people relate to that.”

Bell, like many of his fellow competitors, also sees the SAM Tech Factory Stock Showdown as a way to race on a professional level without the commitment of time and resources necessary to race in a professional category.

“As a whole, I love the class, and I hope we keep it at about 8-10 races in the future,” Bell said. “I think that’s a reasonable number for most of us. When you start going to more than 10 races, it requires a lot of infrastructure. I know that ten is about what I could fit into my schedule. I am in the car business in Shreveport [La.] and I love what I do but it’s a time-consuming endeavor. Basically, this series is perfect for me.”