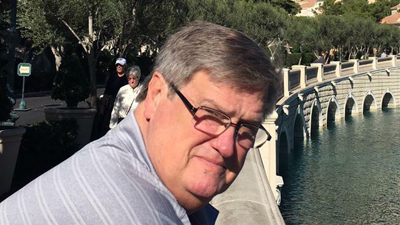 George Howard long ago secured his place in drag racing history. The longtime track operator, race promoter, who passed away on Sunday, January 8, after a brief illness, had the audacity to think that he could offer a top prize of $40,000 for an E.T. bracket race and somehow turn a profit. In 1984, a time when $5,000 was considered a life-changing payout, Howard upped the ante, and against all odds, he managed to promote a landmark race at Beech Bend Raceway Park that all but changed the course of sportsman drag racing. Howard may not have invented big money bracket racing, but he certainly changed it for the better thanks to his “give the customer what they want” philosophy.

“Big George” didn’t just dream big; he made big things happen. More than 20 years ago, Howard took perhaps the biggest gamble of his career when he created the Million Dollar Drag Race at Huntsville Dragway, one of the many tracks he owned or managed during his career. In the opinion of many, the notion of E.T. bracket drivers competing for a six-figure payday was beyond absurd but George didn’t care. A fearless gambler, Howard and then-partner Steve Earwood guaranteed the payout with the hopes that at least 100 hearty bracket racers would be willing to ante up the $2,000 entry fee. The event attracted almost twice as many racers as expected and eventual winner T.J. Tracey, who’d risked his house payment to post the entry fee, walked off with $175,000.

“I just wanted to do something for the bracket racers,” Howard said at the time. “Those guys are the true backbone of the sport. I wanted to give back to the racers, which got me thinking ‘what would be neater than to have them race for the largest purse in drag racing history regardless of class?’  That thinking is what formed the basis of the Million Dollar Race.”

The success of the Million Dollar race later led to the creation of the B&M Racer’s Appreciation Series, another promotion that enjoyed a long and successful run with Howard at the helm.

As a promoter, Howard was a modern-day P.T. Barnum. He seemingly always knew what his customers wanted and rarely failed to deliver. Chances are, only Howard would have been crazy enough to rent a helicopter so he could drop stacks of dollar bills over a crowded pit area below. Howard reveled in the sight of grown men risking life and limb climbing fences, trees, and rooftops in order to retrieve them.

During his long career, Howard owned and or managed a number of tracks in his native Alabama including Montgomery Motorsports Park, Huntsville Dragway, and Lassiter Mountain Dragway. While he had a fondness for E.T. bracket racers, Howard also knew how to attract a crowd. In 2005, he hosted the Rocket City Nationals at Huntsville Dragway. Offering an unheard-of payout to the winner of an eight-car Top Fuel race, Howard packed the tiny eighth-mile track to capacity. Clay Millican won the race and collected $106,000 for his efforts.

Promoting big races was just a small part of Howard’s legacy; he was also a racer and a successful team owner. One of the biggest mistakes anyone could make was underestimating Howard’s resolve and determination. Forewarned about the competitiveness of NHRA Pro Stock racing, Howard and then partner Pete Williams weren’t afraid to buy a car, lease competitive engines, and hire Rickie Smith as their driver. The end result was Smith’s second-ever Pro Stock victory at the 1999 Houston race. Ironically, Howard wasn’t on hand for the victory celebration since the event took place on the same weekend as the fourth annual Million Dollar Race.

Once you got to know George, it was impossible not to like him. He treated strangers like long-lost friends and always went the extra mile to help out a racer in need. His desire to help others far outweighed his longing for financial success. For a guy who routinely gambled hundreds of thousands of dollars promoting races, Howard’s sense of humor never wavered. His mood was always upbeat no matter if he packed his track to capacity or peered through rain drops at empty grandstands. His laugh was contagious.

Current Southeast Division Director Rich Schaefer had the honor of inducting Howard into the Hall of Fame in 2006. Schaefer, like many others, had fond memories of Howard and fellow Alabama-based track operator Gary Moore, who also passed away recently.

“George Howard forever changed the drag racing industry,” said Schaefer.  “He was our PT Barnum. George made winning one of his events feel like winning the world’s greatest sporting event ever. Look around the sport of drag racing today and you’ll see dozens of events trying to re-create the George Howard experience.  I will forever miss and admire “Mr. Promoter” George Howard.

“Gary Moore, operator of Mobile Dragway and Atmore Dragway also passed away, a day before we lost George. Moore operated dragstrips in the Southeast Division for nearly 50 years and was instrumental in working with the Creek Indian Casino to rebuild Atmore Dragway. Moore, a great promoter in his own right, was a good friend to George Howard and its tragic that we could lose these two legends within a day of each other.”

In 2008, Howard sold the rights to the Million Dollar Race to longtime bracket racer Randy Folk, and the event has remained successful, largely because Folk, and his daughter, Jennifer, have stayed true to Howard’s vision.

“We are extremely sad to learn of the passing of George Howard, the founder of the CARS Million Dollar Drag Race,” Folk said in a post on the Million Dollar Race Facebook page. “Without George’s incredible vision and determination, the sport of drag racing as a whole, and bracket racing in particular, would not be where it is today. To us, George was far more than just a business associate; he was also a dear friend who has always been there for us. While we mourn his passing, we’ll always remember his positive attitude, infectious sense of humor, and all the great times we had together.”