Heading into the 2017 season, Greg Stanfield wasn’t planning on doing much driving. A four-time Super Stock national champ turned Pro Stock racer, Stanfield was content to take a step back and support his son, Aaron, who has blossomed into one of sport’s most promising young talents. Sometimes, plans work out even better than one had hoped and by the end of the season, Aaron Stanfield logged a very respectable fifth-place finish in Super Stock and a bit more unexpected, Greg was close behind with a seventh-place finish.

“That was not how we drew it up,” Greg laughed. “I wasn’t planning on doing much at all. I was just out playing around in one of [engine building customer] Steven Bell’s cars and I just sort of happened to do pretty-well. It was Aaron who actually pushed me to run a bit more and when it was all over, we were both in the top ten. It certainly didn’t start out that way.”

The Stanfields had plenty of memorable moments in 2017. At the Bristol event, they nearly doubled with Aaron winning in the Top Dragster presented by Racing RVs.com class and Greg scoring a runner-up finish in Super Stock. As it turns out, that was just a warm-up for the Route 66 Nationals a few weeks later where the father-son duo raced in the Super Stock final. Aaron turned on the win light and Greg was probably the happiest runner-up in the history of NHRA racing.

“Chicago was the best, by far,” said Greg. “It was pretty cool to race in the final. It was something we’d never even discussed; it was never a thought in my mind which is usually when things like that happen. I wasn’t even paying attention [to the ladder] that weekend. We just happened to get to the late rounds on Sunday and we were both still in. Next thing I knew we were racing in the final. For a father, it doesn’t get any better than that.”

After winning his four Super Stock titles, Greg went on to race in Comp and Pro Stock Truck before finally making the big jump to Pro Stock. For 15 years, he more than held his own against the biggest teams in the sport, winning four events including the 2010 Chevrolet Performance U.S. Nationals. Even during his most successful days in Pro Stock, Stanfield always maintained that he’d one day return to his sportsman racing roots and true to his word, he’s back in the Lucas Oil Series, albeit in a supporting role. Ironically, Aaron has taken a similar career path. He made his debut in Pro Stock as an 19-year old in 2014.

“I’m a sportsman racer. I always have been, even when I was racing Pro Stock,” Greg said. “I just like competition. I was just in right spot at the right time to do a Pro Stock deal. I had great supporters but when it got so expensive we just couldn’t afford it anymore. Now, I see that they’re trying to do things with the class to hold down costs and I hope that’s successful. I’d do it again if the right deal came along but I’m also pretty happy with what I’m doing now.”

Given his recent results and tremendous upside for future greatness, it appears that Aaron is destined to join his father and win multiple championships most likely sooner rather than later. The younger Stanfield has proved to be as versatile as his father with success in a variety of classes including Stock, Super Stock, Super Comp, and Top Dragster. As a second-generation racer, Greg says he can relate to Aaron’s career path, but he also admits that the intricacies of the Top Dragster class, where drivers bracket race at more than 230-mph, escapes him.

“He likes Top Dragster but I don’t understand it,” Greg says. “It’s a delay box class and I’ve never done that. I couldn’t even tell you how to operate it. He likes it and he’s good at it so we’re going to stick with it at least for now. He likes going really fast and that’s the perfect place to do it. What those Top Dragster guys do it amazing. It’s funny. I was just about to get out of the sport when Aaron came along and said he wanted to race. I didn’t push it on him at all. He was heavily involved in baseball but once he got behind the wheel that was a wrap [on his baseball career]. It’s been racing, racing, racing ever since.”

For the Stanfield family, which also includes Greg’s older brother Mike, his long-time crew chief, the upcoming season figures to be even more hectic than 2017. In addition to Aaron’s Top Dragster and Super Stock Camaro, the team is readying three COPO Camaro entries that are slated to compete in the SAM Tech NHRA Factory Stock Showdown. Aaron will drive one, Arthur Cohen will drive another, and team owner Steven Bell will race the third. Greg is building the engines for all three in his Bossier City, La. Shop. 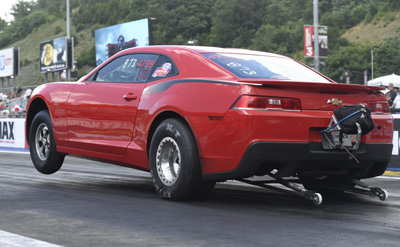 “They are my engines and Aaron tunes them,” said Greg. “It’s similar to Pro Stock but not nearly as demanding; at least not yet. It’s actually a very fun class. I think NHRA has done a good job keeping it in a box so to speak. You’ve got three manufactures involved and they all seem to be committed to it. Its only seven races so it allows people to have real jobs and a life outside of racing. That’s really appealing for me.”

Last year, Bell was a regular competitor in the SAM Tech Factory Stock series. Bell was a runner-up at the Chevrolet Performance U.S. Nationals and also set top speed at that event with a run of over 168-mph with his COPO Camaro. Currently, Bell is one of just two Stock Eliminator racers to run over 170-mph along with Ford racer Carl Tasca.

“I haven’t worked real hard on this program yet,” said Greg. “I’m sort of going at my pace. We’re not treating it like a Pro Stock car but we’ve probably made 50 dyno pulls so far. These [COPO engines] are a bit different than a Pro Stock engine because they’ve got overhead cams and superchargers but it’s still just a big pump. They’re actually really neat to work on. I like the challenge. I figure that next year I won’t drive as much, if at all. I enjoy helping Aaron and Steven. I feel like in my career I’ve never stayed in one place for too long. I get to where I want and then look for a different challenge. Right now, Factory Stock is that challenge. I also want to get some more Wallys for my brother before he retires so we’ve got that going as well. It’s going to be a busy year.”