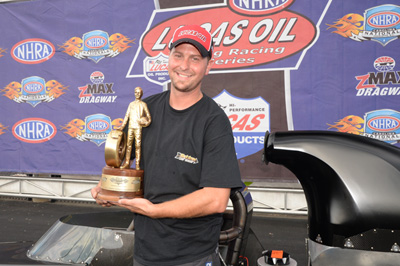 This was likely a foregone conclusion in April, but now it’s all but a certainty: Doug Doll Jr. will be the 2016 NHRA Lucas Oil Drag Racing Series Comp eliminator national champion after driving Charlie Greco’s dragster to a win at last weekend’s NHRA Carolina Nationals. It was Doll’s third national event win of the season to go along with a perfect slate of five Lucas Oil Series victories. Doll, an Indy winner in Super Comp, has accumulated 730 points, more than any other driver in the history of the Comp class. Just three drivers have ever cracked the 700-point mark: Dan Fletcher, Bruno Massel, and Al Ackerman, and all of them were crowned national champions.

So if Doll has completed a perfect eight-win season and has more points on his scorecard than any Comp racer, ever, why has he not officially clinched the 2016 title? Technically, Division 6 driver Bryan Hyerstay is still in the mix. Because three of Doll’s victories came from short fields of fewer than 16 cars, those wins were worth just 85 points; a win in a field of more than 17 nets 95 points. Given that minor technicality, it is possible that Hyerstay could win two of the five remaining national events and two of the four remaining Lucas Oil Series events and tie or pass Doll for the title. Hyerstay could still accumulate a score of up to 760 points.

To be perfectly candid, that’s not likely to happen. Hyerstay is a solid driver, and his four-cylinder-powered dragster is nimble and quick, but the task at hand is so great it’s unlikely that he’s even going to attempt it. Winning four events would be difficult enough on its own, but with time running short, the Washington state-based Hyerstay would need to log some extensive highway miles to have a chance at the title. At this point, the only Lucas Oil Series events left are in Reynolds, Ga.; Rockingham, N.C.; Lexington, Okla.; and Las Vegas. The remaining national events, in St. Louis, Dallas, Reading, Las Vegas, and Pomona, aren’t exactly in his backyard, either. Doll is well aware of the current points situation, so though he probably has not rented a tuxedo for the banquet yet, he should be compiling notes for his acceptance speech. 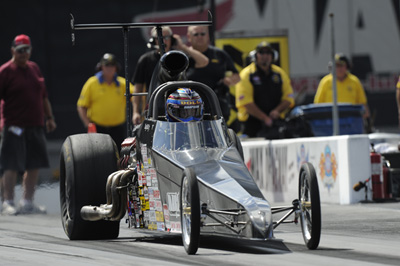 “If we don’t get it with that score, I don’t know what to think,” said Doll. “We’ve done all that we could do this year and then some. I honestly can’t believe what this team has done. I mean, this is a new team with a new car. I knew I was getting into a good deal here, but I never expected we could come out and do this the first season.”

Doll maintains that he’s the weak link in Greco’s team, but he’s being far too hard on himself. His driving has been consistent, including in the final round in Charlotte, where he left five-hundredths ahead of Van Puckett.

“When I got in this car the first time, I knew I was getting in a car that was capable of winning the championship,” Doll said. “That was a lot of pressure. If I was Charlie, I would not have picked me to drive this car. I know that sounds odd to say, but I’m just being honest. I didn’t have much experience in a Comp car, and there were a lot of other drivers who would gladly have jumped at this opportunity.”

His humbleness aside, Doll is grateful to have a chance to contend for a national championship, especially after a heartbreaking second-place finish in the Super Comp class more than a decade ago.

“I was runner-up in Super Comp in 2004, and I didn’t think I’d ever get another shot,” he said. “I took some years off, and then I got this call from Charlie to drive his new Comp car. I knew right then and there that this would be my best shot to get it done. This team has the best of the best as far as personnel and equipment. He’s spared no expense, so I’m just happy that I was able to do the job that I was asked to do. This whole deal is pretty exciting. I still don’t think that what we’ve done has set in.” 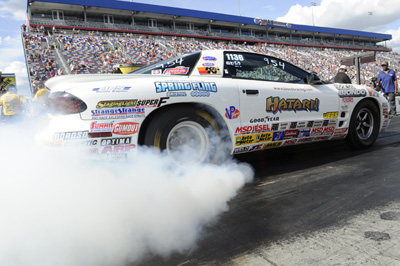 Return of the Terminator: The only shocking thing about Peter Biondo’s Super Stock victory in Charlotte is that it’s his first NHRA national event title in more than two years. Biondo, a guy with seven national championships and 49 national event victories, hadn’t won a race since his historic double at the 2014 Denso Spark Plugs NHRA Nationals in Las Vegas, but he took care of that with a final-round win against Jeffrey Jewell in the Charlotte final. Throughout his career, Biondo has shown the ability to win in any car and any class, but his latest victory came behind the wheel of his favorite vehicle, the Hatari Firebird that’s owned by longtime family friend and crew chief Phillip Monteith.

“It has definitely been too long; I’ve missed this feeling,” said Biondo. “I took some time off to start a family and take care of a business and get back to competing. I’m not sure if or when I’ll be in a position to win another championship, but I definitely savor every opportunity I have to get out and race and compete against the best.”

Biondo’s latest victory could best be described as a total team effort. While he certainly did his part with consistent lights and solid finish-line driving, it was Monteith’s Pontiac that saved the day in the semifinals when Biondo had a heads-up battle against Jerry Emmons’ Lucas Oil-backed entry. Biondo and Monteith went to work on their car Saturday night, and it responded with a 9.49 to 9.73 victory.

“On Saturday night, I told Phillip, ‘This time, the pressure is on you, not me,’ ” Biondo said. “We did just about everything we could think of to make the car quicker. We pulled out all the extra weight, changed the oil, drained the extra rear-end-gear lube; you name it, we did it. We got a lot of help from Anthony Bertozzi and Phil Ivy, and in the end, we picked up about three-tenths, which is what we’d hoped to do. It was a really cool race.”