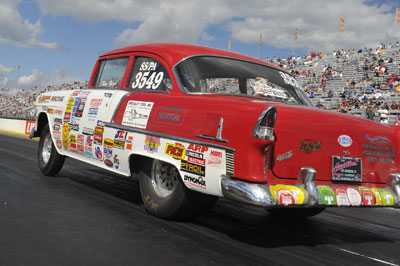 Rene Garza knows that he is lucky to be alive, so even though his driving days are most likely over, the fact that he has a chance to go racing this season with his youngest son, Joey, is nothing short of a miracle. Garza, 64, has been a loyal NHRA racer for more than 40 years, and his red and white two-tone ’55 Chevy Super Stocker is easily one of the most recognizable Sportsman cars in the NHRA North Central Division. Garza’s driving career essentially ended last September after he contracted the West Nile virus, which is usually transmitted via a mosquito bite. Less than 1 percent of West Nile cases are considered severe and result in neurological disease, but in Garza’s case, it was nearly fatal.

“It started last year at the U.S. Nationals; I started feeling a little funny,” he recalled. “Then it just got worse. I was in a coma for two weeks and spent a month in intensive care. I was in the hospital until November, and I’m still not 100 percent. It messed up a nerve in my right leg, my gas pedal leg, so I’m using a walker to get around. The doctors have told me it might be a year or more before I’m even close to normal. I just know that I’m lucky to be alive.”

Garza’s illness could have robbed the sport of one of its most loyal competitors and one of its most treasured race cars. It’s hard to imagine any vehicle that better personifies the American auto industry than the timeless ’55 Chevy. A combination of attractive styling and sensible price tag, the “double nickel” became an instant classic. It is entirely possible that whoever authored the popular General Motors sales catchphrase “Baseball, apple pie, hot dogs, and Chevrolet” probably had the ’55 Chevy in mind. There was a time when the classic “tri-five” 1955-57 Chevys ruled the nation’s dragstrips, but today, just a handful are left. And an original car such as Garza’s that has not been heavily modified is even more difficult to find. 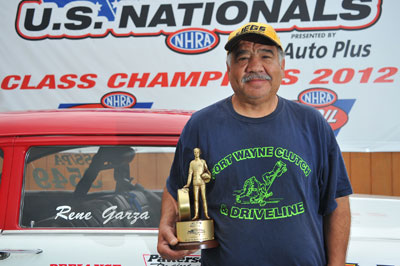 Garza bought the car in 1968 when he was a freshman in high school in his hometown of Fort Wayne, Ind. The car was originally equipped with a straight-six, but he quickly swapped that for a 327-cid small-block. A few years later, Garza’s friend Steve Lambert introduced him to engine builder extraordinaire John Lingenfelter, who convinced him to go Super Stock racing.

“John’s shop was in Decatur [Ind.], about 10 miles from me,” said Garza. “He took me by the arm and taught me all about Super Stock racing. In 1973, we put John’s engine combination in the car and went to the Nationals at Indy. Back then, you had to win your class just to race in the eliminator, and it was tough, but we were competitive.”

In the next four decades, Garza earned numerous class wins, set multiple records, and qualified No. 1 at a handful of events. He also won the Division 3 NHRA Lucas Oil Drag Racing Series event at Lucas Oil Raceway at Indianapolis in 1990 and 1994 and reached the final round of the 1997 Topeka national event before losing to multitime national champion Edmond Richardson. He briefly tried racing a big-block Oldsmobile in the Super Stock GT classes but never abandoned his trusty ’55 Chevy.

Making a ’55 Chevy a competitive Super Stock car is no easy task. The factory-installed 265-cid engine is the smallest small-block V-8 in the GM lineup, and it doesn’t have the torque necessary to launch a big heavy car such as a shoebox Chevy. Garza learned a long time ago that to achieve competitive 60-foot times, he had to treat the ’55 as an old modified car using a very short 6:83 rear-gear ratio, a 2.74 low gear in the transmission, and a lot of engine rpm. As a result, the car launches very hard for an 11-second car, but it’s also susceptible to tire spin if the track conditions are not optimum or the burnout isn’t done correctly. 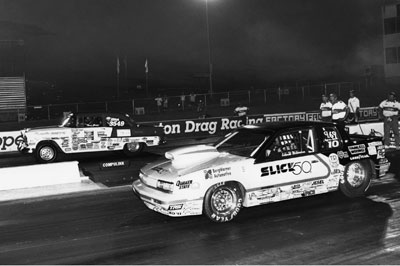 “You have to use a lot of rpm to get this car going because the torque just isn’t there,” said Garza, who has run a best of 11.62 on the 12.65 SS/PA index. “I turn almost 9,000 rpm at the finish line, and that can be hard on parts. You need to have good valve springs and stay on top of your maintenance. A few years ago, NHRA changed the rules to let us use a three-speed transmission, and that helped a lot. The car picked up a bunch, but it’s still tricky to drive sometimes.”

New driver Joey Garza, 23, is no stranger to drag racing. He grew up watching his father race, and he has logged time in a Jr. Dragster. He currently has a street-legal GTO that is just as quick as his father’s Super Stock car. Given the unique quirks of the ’55, Rene plans to give Joey plenty of time to get acquainted with his new ride.

“He is really looking forward to getting in the car, so we’re going to go to our local track in Muncie and ease him into it,” said Rene. “He’s never driven a car with a transbrake, so at first, I’ll lower the launch rpm a little so it doesn’t hit so hard. You don’t need a license to drive this car, but it does take a little practice.”

Not surprisingly, the younger Garza, who is studying to be a pharmacist, is more than eager to continue building on his father’s legacy. 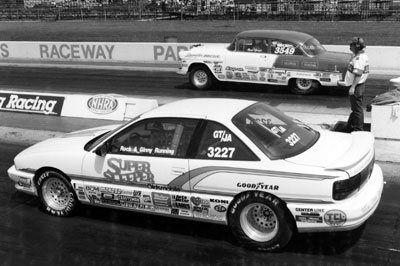 “I have my GTO that I race, and we were hoping to get it into the 10s this season, but now I’m more focused on going racing in my dad’s car,” said Joey. “I am a bit nervous to drive his car. It’s going to be a new experience. We want to go to divisional races and get a few grading points so we'll be able to go to [the Chevrolet Performance U.S. Nationals] this fall. That’s our goal.”

While he continues his recovery, Rene is happy just to be able to return to the track. He hasn’t totally ruled out driving, but he knows that once Joey realizes how much fun it is to drive the ’55, it might be tough to get him out of the seat. Garza also has an older son, Dana, who drove in the NHRA Summit Racing Jr. Drag Racing League and now lives in Thailand, where he works as an English teacher.

“I would consider driving again, but I still have a long way to go with my recovery,” said Rene. “My leg still gets a little numb if I stand on it for very long, so I can’t go too far without using the walker. This whole sickness really took a toll on me, so I definitely don’t plan on running this year. Like I said, I’m happy just to be alive. Our priest told us that my guardian angel was definitely working overtime, and I definitely believe him.”