Making the most of a second chance 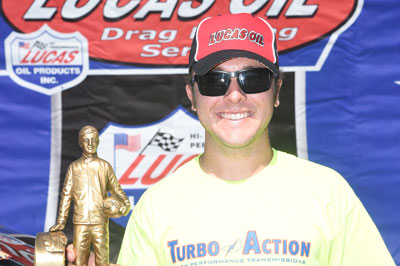 There isn’t much of a downside to making it to two final rounds at the same event except for the empty feeling that almost certainly goes hand in hand with losing both final rounds. After racing to the Super Stock and Stock finals at last weekend’s Summit Racing Equipment NHRA Southern Nationals in Atlanta, Jimmy “Cooter” Hidalgo Jr. was in danger of joining that small fraternity after he red-lighted away the Stock final against Wes Neely. Given a second chance, he came through with a victory when he stopped Michael Volkman to win in Super Stock. Given the competitive nature of NHRA class racing, Hidalgo was more than happy to come away with a win and a runner-up.

“These races are not easy to win, so anytime you’re still here on Sunday with a chance to win two of them, that’s a good weekend,” he said. “Sure, it would have been great to double, but Wes is a great racer, and I knew that I’d have to be really good against him. I turned it red by six-thousandths, but I had to put that out of my mind and just focus on winning in Super Stock. I couldn’t afford to let one race affect the other.”

Hidalgo had plenty to think about before his Super Stock final, especially after his SS/GA Firebird lost traction on the starting line during his semifinal bye run. Hidalgo’s car spun the tires so much that it barely left the starting line. 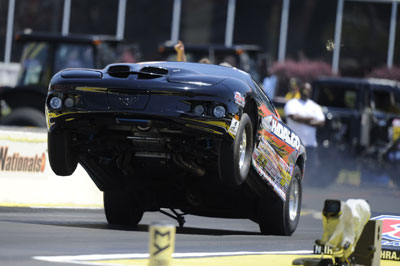 “I didn’t think there was really anything wrong with the car; I just thought it was a freak occurrence,” said Hidalgo. “I wanted to make sure the car would hook in the final, so I moved 25 pounds to the back of the car, and I lowered the rear tire pressure. I also moved from the left lane to the right lane.”

As a result of the changes he had made, Hidalgo’s car hooked in the final. In fact, the car hooked so hard, it launched into a towering wheelstand that kept the front tires airborne more than 150 feet downtrack. When the car finally landed, Hidalgo had to chase down Volkman and managed to do so just before the finish line.

The Atlanta Top Fuel final between teammates Doug Kalitta and J.R. Todd featured a margin of victory that read .0000 on the Compulink timing system, and the Super Stock final was almost as close: Hidalgo crossed the finish line .0014-second ahead of Volkman.

“When the car did that big wheelstand, I just wanted it to stay straight,” said Hidalgo. “Typically, when the car does that, it doesn’t lose much e.t., so I didn’t think I’d lost the race, but I was afraid that it might start to move towards the wall or the centerline, and that might have done me in. It was a crazy race, but I’ll take it. My dad and I both won class in F/SA and G/SA, and we both made it to Sunday [quarterfinals]. Dad lost a close race with six cars left in Stock, but I pulled it together and got a win. We left Atlanta one trophy away from a perfect weekend.” 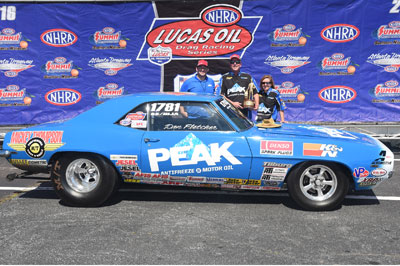 Fletcher gets No. 97: Dan Fletcher will tell you that all 97 of his NHRA national event victories are special, but his latest is easily one of his most memorable, or perhaps just his most bizarre. Fletcher had never competed in the Super Street class until last weekend, but that didn’t stop him from driving to a win, which puts him on the short list of drivers who have won in six classes. More often than not, Fletcher races his Peak-backed entries in Super Stock and Stock, and there was no reason to think he wouldn’t do that in Atlanta, but a couple of weeks ago, he decided to try something a bit different.

“There’s a big bracket race coming up in Bristol [the K&N Spring Fling], and I wanted to race my Super Stock Camaro, so I decided to put it in bracket mode, which means a delay box from Biondo Race Products, a #1 Products throttle stop, a Quick Fuel 850 carburetor, and a new torque converter,” Fletcher explained. “In the process, I thought I’d give Super Street a try. I already won a Super Comp race this year, so I checked that off my list, and I thought it would be fun to try Super Street. Honestly, I came up with this a couple of weeks ago. It wasn’t really planned.”

While Super Street is generally considered to be an entry-level class, it is inhabited by many talented racers, so most drivers probably didn’t mind the arrival of the touring pro. Using Friday’s time-trial runs to gather data and hone in on the desired delay-box and throttle-stop settings, Fletcher felt as though his chances were as good as anyone’s when eliminations began. He was tested early with a round-one match against past Indy winner Frank Kohutek and a second-round battle versus Jonathan Anderson, who was the hottest driver in the class with three NHRA Lucas Oil Drag Racing Series wins so far this season. Fletcher passed those tests and moved into his 146th final round and collected the win after Ed Pauley fouled.

“I was a little disappointed in the way I drove in the final [.034 reaction time], but obviously, I’m pretty happy with this,” said Fletcher. “I mean I was hoping to check off another class, but I can’t say I really expected to do it on the first weekend. This car was very good, and with a delay box and throttle stop, you can make so many adjustments that you can’t make in Super Stock. It’s a whole different animal. I will definitely do this again.”

Run of the event: Top Dragster low qualifier and eventual race winner Richard Prince proved that low-six-second dragsters can be effective bracket cars when he ran a 6.129 on his 6.12 dial in round one to beat Chase Murray.

Race of the event: The majority of the Lucas Oil Series racers in Atlanta were in midseason form, so there were many great runs to choose from, but this week, we’re going with the Super Street race between Lamar Stevenson and Doug Ramsey in round two. Ramsey did more than enough to win with a nearly perfect .005 start and a 10.908 at the finish line. Ramsey’s .014-second package would win almost any Super Street race, but it paled in comparison to the nearly perfect run turned in by Stevenson, who coupled a .003 reaction time with a 10.900 run.

In case you missed it: A special drawing to determine the final spots in the NHRA Summit Racing Series National Championship later this season in Pomona was held during the Summit Racing Equipment NHRA Southern Nationals. The Northwest Division (6) was drawn for Super Pro, the Southeast Division (2) for Pro, the Pacific Division (7) for Sportsman, and the West Central Division (5) for Motorcycle. Each will bring the eighth racer who will complete the eight-vehicle fields. For Divisions 2 and 5, that spot will be filled by their Summit Racing Series Finals Race of Champions winner, and Divisions 6 and 7 will bring their event champion for the final spot.

The first seven racers in each class in the National Championship competition are the NHRA Summit Racing Series Finals champions from Divisions 1-5 and the Race of Champions winners from Divisions 6 and 7.