Hall in the family 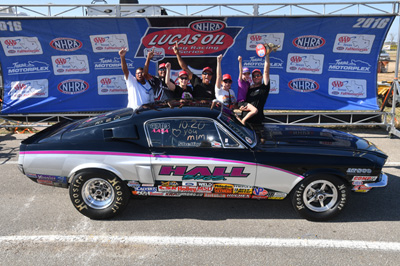 For Rusty Hall, winning the Stock final at the AAA Texas NHRA FallNationals wasn’t all that difficult. Although he trailed Bobby Brannon off the starting line, Hall decided to hit the brakes, then watched his win light shine after Brannon broke out by two-hundredths of a second. What happened next, an emotional winner's circle interview filled equally with tears of joy and sadness, was far more difficult for Hall. Moments after winning his fourth national event title, Hall’s thoughts quickly turned to his late mother, Durenda, who passed away last November from a heart attack.

“My mother wasn’t necessarily a big race fan, but she always wanted to be there for the winner’s circle pictures,” said Hall. “If she was still with us, I guarantee she’d have been up there standing next to the photographers after I won. There were times when she’d drive from home to come to a race if I got to the late rounds just so she could take photos. One time, I won an IHRA race about an hour from home, and she made me hold up the line so she could be there. They were done with everyone else, and the photographer wanted to go home, and I was telling him, ‘No, she’s going to be here in 10 minutes, just wait a little bit longer.’ Those are the memories I’ll always cherish. Since we lost her, I’ve wanted to win a race and dedicate it to her. I’m glad I finally got to do that. My mom and dad have always been the backbone of what we do. They have always supported my brother and me.”

Hall previously won three NHRA national event titles, but his last one came in 2005 at the Auto Club NHRA Finals in Pomona. He is also a former winner of the Chevrolet Performance U.S. Nationals, having scored at the sport’s most prestigious event in 2002. 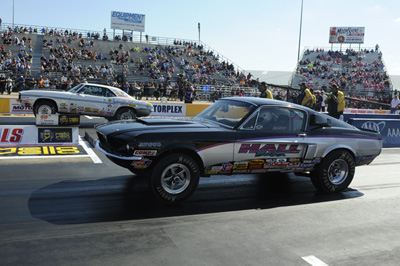 “I’ve had some semifinal finishes, but over the last few years, I haven’t been able to close the deal,” said Hall, who hails from Sweeny, Texas. “I got to the semi’s at the [JEGS NHRA SPORTSnationals] earlier this year and lost a heads-up race. The big deal about this one is that it is a home race. I’ve never been able to close the deal in Texas. I’ve had four or five runner-up finishes. I’ve lived a few places around the country, but home is always where you grew up, and for me, that’s Texas.”

Hall was able to get over his late-round blues in Dallas thanks to a bye run in the quarterfinals and a free pass in the semi’s when Patrick Courts fouled in his L/SA Firebird. The final round was a classic battle between vintage muscle cars, with Hall’s AA/SA ’67 Shelby taking on Brannon’s A/SA ’69 Camaro. Brannon was slightly ahead at the start, and when it became apparent to Hall that he wasn’t going to catch his slower opponent, he hit the brake pedal and won with a 10.218 on his 10.20 dial after Brannon broke out with a 10.406 on his 10.43 dial.

“I know that a lot of people race using statistics, and that’s what I did,” said Hall. “I thought he was probably going to break out, so instead of following him through the lights and maybe breaking out even worse than he did, I just said, ‘See you later’ and made the decision to get on the brakes. I thought my reaction time was better than it was [.066]; when I saw how far behind I was, I didn’t have many options. My heart was in my throat until the win light came on. As [NHRA announcer] Alan Reinhart says, I didn’t want to be a three-time loser: behind at the start, behind at the finish line, and behind on the time slip.

“I do think that having one of the faster cars in the class is a big advantage,” Hall said. “That’s one of the reasons I try to run the AA/Stock class. The new cars are a whole lot faster than mine, but I still get to chase most of my opponents. When I run some of these eight-second cars, I tend to give the finish line back because I’m not used to the closing rate, but thankfully, I didn’t have one of them this time.” 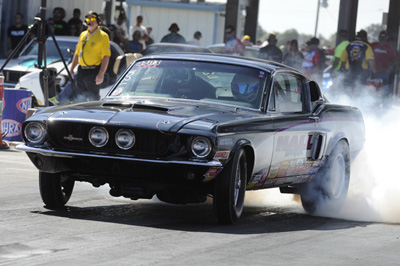 In addition to being a very competitive Stock eliminator car, Hall’s ’67 Shelby GT500 Mustang is a huge hit with the fans. The car, though not an original Shelby, is a faithful re-creation of one of the rarest and most desirable muscle cars ever built. The Hall family has owned the car on and off for the better part of four decades. In fact, it is the same car that longtime family friend Charlie Ford drove to a win at the 1987 Dallas event, the second NHRA national event hosted by Texas Motorplex.

“My dad [Sonny] and my uncle bought the car in 1977, and then a guy in Washington state bought it from us in 1979. My dad and Charlie Ford bought it back in 1981, and they raced it together for quite a while,” said Hall. “My dad was the crew chief when Charlie won this race in 1987. The car went back out West in 1991, when it got sold to [Division 7 racer] Richie Pauley, and then it came back here with another friend of ours. I lost my car in a trailer fire in 1999, and I bought it after that, and I’ve been racing it ever since. I think it’s a cool car, and we even named our daughter Shelby.”

Hall was quick to dedicate his latest win to his late mother, and he acknowledged the ongoing support shown by the rest of his family, including his father, Sonny; brother, Steven, who is a two-time national event winner in Stock; and wife, Kelly Pott-Hall, who also competes in Stock with a manually shifted K/Stock Mustang.

“My family has always been the backbone of my racing,” said Hall. “Even when I’m down, they always find a way to pick me up. They tell me, ‘You’ve done this before; you can do it again,’ and that’s uplifting. I’m grateful to have them.”