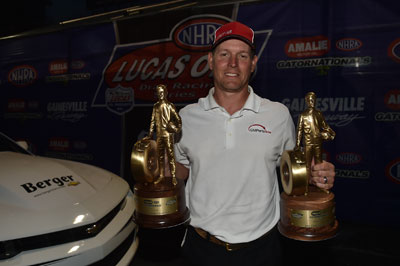 Three years ago, Jeff Strickland went to the final round of Stock and Top Dragster at the Summit Racing Equipment NHRA Southern Nationals in Atlanta. He used a perfect reaction time to beat Jeff Adkinson for the Stock title and then returned a few minutes later to face Ray Miller III for the Top Dragster crown, but his hopes for a double were dashed when he broke out by six-thousandths.

“For a while, I had to wonder if that wasn’t my best shot at a double,” said Strickland. “It’s so hard to win these races, even in one class, that you just never know if you’re gonna get another chance to do it.”

Strickland’s next opportunity to join the relatively short list of drivers who have hoisted two Wallys at the same event came at last weekend’s Amalie Motor Oil NHRA Gatornationals, and this time, he delivered. Strickland got the first title by driving his Sticker Punk entry past Casey Spradlin in the final of Top Dragster. As gratifying as it was to claim his first Gainesville victory, Strickland didn’t have much time to celebrate since he still had to run the Stock final, where he faced 1995 Comp national champ Sal Biondo, an 18-time national event winner, who has three previous victories at Gainesville Raceway. In a modern-day muscle car battle, Strickland wheeled his COPO Camaro to a close double-breakout win over Biondo’s Cobra Jet Mustang. For Strickland, it was career wins No. 12 and 13, and he became just the 20th driver to double up at a national event.

“We ran almost the entire race today, so I was too busy to really even think about a double,” said Strickland. “There was one time I came around the corner to pull into the staging lanes, and I had to ask [an NHRA official] what round it was. I’ve never won this race, and it’s always been a goal of mine; it’s just hard to believe that I got it done in both cars. I feel pretty blessed right now.”

While Strickland had never won the Gatornationals before, he had visited the winner’s circle at Gainesville Raceway. In fact, he won the Top Dragster title a week earlier at the track’s Southeast Division NHRA Lucas Oil Drag Racing Series opener. Interestingly enough, the GMPartsnow.com COPO Stocker that Strickland drove at the Division 2 event was not the same car that raced at the Gatornationals, even though they are both owned by the Gray Motorsports team and have a similar appearance. 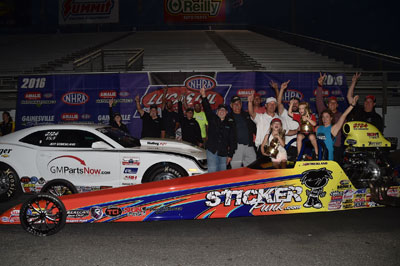 “Last week, I drove our 427-cid car, but my teammate, Adam Badgett, wanted to run this race, and the only way he could get an entry was to race in the [NHRA] Factory Stock Showdown, so he drove the 427 car, and I brought out the 350 [cid] car that I ran a couple years ago," said Strickland. "There are a few minor differences between the two, but it wasn’t really hard to adjust. Both cars work very well.”

Strickland has always been known as a versatile driver who has had success in everything from E.T. bracket racing to Super-class racing to bottom-bulb Stock and Super Stock cars. His Atlanta Stock win in 2013 even came behind the wheel of a manually shifted Chevy Nova. In Gainesville, Strickland didn’t seem to have much difficulty moving from a 200-mph Top Dragster to a 10-second COPO Camaro, even though he sometimes made runs in each car just minutes apart.

“Honestly, I think I have the best of both worlds because I have two race cars that are absolutely a blast to drive,” he said. “The COPO does nice wheelstands, and it’s a very solid, stable car, and the Top Dragster is just fast. We put a ProCharger on it last year because we needed to make sure it was quick enough to qualify, and it’s a fun ride. I also enjoyed being able to race at night. I know not everyone feels that way, but you really get the sensation of speed driving that dragster at night.”

Youth Movement: Nine days before the start of the Amalie NHRA Gatornationals, Daniel Young was not even eligible to compete in an NHRA national event because he had not yet celebrated his 18th birthday. On March 8, Young finally turned 18 and was pleasantly surprised to find that the quota had not been reached and there was still enough time to enter Super Stock ahead of the Monday deadline. 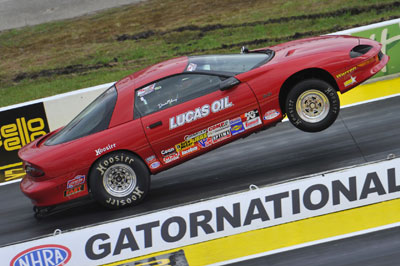 On Sunday night, Young authored a fairytale ending to his birthday week by driving his Lucas Oil-backed Firebird to a win over Merrill Schrimscher in the final round. Young, a graduate of the NHRA Summit Racing Jr. Drag Racing League, benefited from a little good fortune on race day when two of his opponents, Chuck Gallagher and John Stock, were no-shows. He also watched in his rear-view mirror when national champion Anthony Bertozzi red-lighted by three-thousandths. For his part, Young was solid based solely on his numbers — no one would have guessed he was making his Super Stock debut. In the final, the biggest round of his brief career, Young delivered his best performance with a 10.627 on his 10.62 dial for the win after Schrimscher broke out. Afterwards, Young took to his Facebook page to thank the many friends and fellow racers for their support.

“Well, all I can say is God is good; I'm still in awe about the whole deal,” Young said. “Turning 18, then luckily getting in days before the Gators was a feat on its own, but being able to win it? I would have never ever thought in a million years that I’d win this race let alone my first try in Super Stock! Thanks to all for the calls, texts, and messages. It means a lot.”

Run of the event: Rodney Rosenstiel’s AA/AM ’23-T roadster is one of the most impressive cars in Comp, and in Gainesville, he was able to earn the No. 1 qualifying spot with a blistering 6.277 at 218.83 mph. Rosenstiel’s run was more than three-quarters of a second under the 7.04 AA/AM index, and with the exception of the Pro Mod classes, it was one of the quickest and fastest runs for a Comp car.

Race of the weekend: Ray Miller and Mike Griggs were side by side in Super Gas eliminations with matching .033 reaction times, and at the finish line, Miller won by a few inches with a 9.903 to Griggs’ 9.904.

In case you missed it: Super Gas winner Jim Perry’s list of notable achievements includes the 2009 NHRA Super Comp national championship and three national event wins as well as a host of other bracket racing victories. With his latest victory over Ray Miller III in the Gainesville final, Perry has now won the Amalie NHRA Gatornationals for the second time in the last four years, but his success at Gainesville Raceway extends to 1979, when he won the Southeast Division E.T. championship, a forerunner to today’s NHRA Summit Racing Series.

“That was one of the first big wins I had,” Perry recalled. “I used to live in Orlando [Fla.], and I came up here to represent the team from our local track. We didn’t win a trip to Pomona like they do now, but it was still a big deal."