The final NHRA Lucas Oil Drag Racing Series divisional event of the season at The Strip at Las Vegas Motor Speedway wasn’t much different from the traditional and much-hyped Championship Sunday in college football, when conference titles are decided and bowl berths secured. In the midst of an 834-car marathon, the championship battles in four classes -- Super Comp, Super Gas, Top Dragster, and Top Sportsman -- were decided. Following is a look at each of the championship battles and how they were settled. 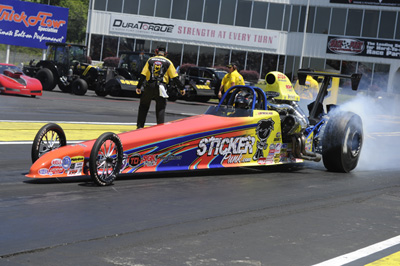 TOP DRAGSTER: By far, the most thrilling battle came in the Top Dragster presented by Racing RVs class, where the lead changed three times during Sunday’s final eliminations. Division 2 racer Steven Furr entered the weekend as the points leader, but because he could no longer add points to his total, Furr elected to stay home in North Carolina and await his fate. Furr didn’t need to wait long to find out that he was not going to win the title because Matt Driskell passed him after winning the second round of eliminations. Driskell, the 1996 Super Comp national champ, took over the lead, but he was far from out of the woods because Jeff Strickland and Thomas Bayer were both still alive for the title.

The big showdown occurred in round four, where Strickland and Driskell had to face each other. With Bayer already out of the running, all Driskell had to do was win the round to clinch the title. Strickland, on the other hand, had to defeat Driskell and win the semifinal round to secure the title. Strickland took the lead at the start, .007 to .038, and held on for the win in a double breakout. In the deciding round, Strickland faced Jesse Adams, who had one of the quickest cars in the field. Strickland was again sharp off the starting line with a .009 light but didn’t need it after Adams’ 6.0-second dragster ran into an air-shifter malfunction. With the title secured, Strickland went on to win the final round over Tony Jardino.

Strickland becomes the sport’s second Top Dragster national champion, and he has a chance to make even more history because he is also the points leader in Stock eliminator heading into the Auto Club NHRA Finals in Pomona. Strickland can win the Stock title if Brad Burton does not reach the semifinals. Should he hold on and win both titles, Strickland will join Scotty Richardson as the only driver to win two titles in a single season. Richardson accomplished that feat when he won the Super Comp and Super Gas titles in 1994. 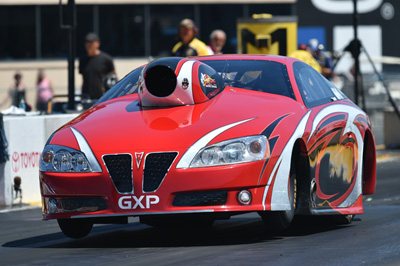 TOP SPORTSMAN: The lead in the Top Sportsman presented by Racing RVs class changed hands early in the week when Mike Williams won the rain-delayed Lucas Oil Series event from April. Heading into the second Lucas Oil Series event of the weekend, Williams’ work was not finished because Don Meziere and Ed Olpin were both still in contention. Williams finished the job in style by reaching his second final round in less than a week, and even though he lost the final to Roy Cracraft, it was enough to secure the title. 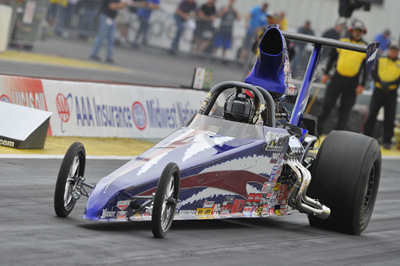 SUPER COMP: Incoming points leader Nick Folk also chose to play the waiting game, passing on a trip to Las Vegas to go bracket racing closer to his home in Durand, Ill. Keeping track of the action via the Internet and text messages, Folk was obviously dismayed to learn that Steve Williams won the rain-delayed event from April. Williams came into the event as a long shot, needing to advance to the late rounds of both events to have a chance. Following his midweek win, Williams went to the second round of the season finale and lost to Nik Downing. Seconds after that race, Folk’s phone lit up with messages from friends letting him know he had officially clinched the title.

Folk’s total of 652 points would be competitive in almost any season, and it was nine more than second-ranked Austin Williams was able to score. The key to Folk’s championship was the Division 5 doubleheader weekend in late July. At that event, Folk won back-to-back Super Comp titles against huge fields. With more than 128 cars in action, he earned two 115-point scores for his efforts, which was enough to help make the difference at the end. Had either of those events featured 128 or fewer cars, Folk would have lost the title by two points.

SUPER GAS: Mia Tedesco became just the third woman to win an NHRA Lucas Oil Series championship when she clinched the Super Gas title last weekend. The points leader since her convincing win in Chicago in July, Tedesco set the bar high with a robust 654-point score, but she still had to await the final results of the Las Vegas event before celebrating.

It was easy for Tedesco and everyone else to do the math because Tommy Phillips and Brad Pierce were the only two drivers still able to catch her, and they both had to win the race to stay in the running. In Phillips' case, he could have clinched the title outright with a victory, and Pierce would have needed to have won the race and score additional points in Pomona. None of those scenarios happened. Phillips red-lighted by two-thousandths in the second round of eliminations, and Pierce also red-lighted in the second round, clinching the title for Tedesco and her CARS Protection Plus team.

With the title secure, Tedesco joins 1979 Super Stock champ Amy Faulk and 2011 Super Stock champ Jackie Alley as the only female drivers to win an NHRA Lucas Oil Series title. It is worth pointing out, however, that Joanne Iarussi finished second to Steve Eckard by two rounds of eliminations in 1982, the first year that a national champion was crowned in the Super Gas category. Besides Tedesco and Iarussi, the only female drivers in the last 34 years to crack the top 10 in Super Gas are Vicki Beam (No. 6 in 1994) and Brina Splingaire (No. 4 in 2008).