The Sports Report: Bradley Johnson’s furious fight to the finish

Bradley Johnson came up two points short in his bid to win the championship in Top Dragster presented by Vortech Superchargers but his late-season charge was nothing short of amazing.
23 Nov 2020
Kevin McKenna, NHRA National Dragster Senior Editor
The Sports Report

Bradley Johnson needed 17 round wins. He got 16.

Johnson entered the late stages of the 2020 season as a leading contender for the Vortech Superchargers Top Dragster title. Short on time and nearly out of races to claim, Johnson needed nothing less than a clean sweep of the final three events in Las Vegas in order to pass incoming leader Anthony Bertozzi and claim the title. To put it mildly, Johnson needed a minor miracle and he nearly got one when he drove to two wins and a runner-up to close out the season. Johnson won the Division 7 Lucas Oil Series event and also claimed a title at the Dodge NHRA Finals. Riding an impressive win streak of 16 rounds, Johnson found himself in the final of the JEGS Las Vegas SPORTSnationals facing former champ Paul Nero. He lost the pivotal round and came up two points short in his quest to overtake Bertozzi but the loss did little to dim what was a superhuman effort. 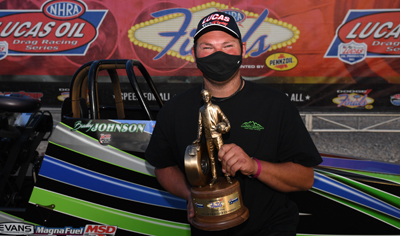 “When we started this season, I didn’t plan on chasing a championship,” said Johnson. “I had no Top Dragster grade points to get into any of the early national events and then when races started getting canceled and postponed due to COVID, I just gave up and figured I’d go to a few divisional races to get grade points for 2021. When the Denver [Mile-High Nationals] race got canceled, I really gave up on it.”

For all the uncertainty of 2020, Johnson actually got off to a solid start with a semifinal finish at his home divisional event at Bandimere Speedway followed by a win in the second half of the annual Division 5 doubleheader in Topeka. By early September, Johnson began to take a closer look at the standings and saw the potential for a strong finish.

“I thought if I could do well at a few divisional races, I could maybe have a shot at the Top 10,” Johnson said. “I thought it would be cool to have a single-digit number, but I still wasn’t really thinking about winning a championship.”

At this point, it’s fair to point out that Johnson finished two points behind Bertozzi, but only competed in two national events. Had he just entered a third race, it would have provided enough points to win the title. Of course, Johnson had no way of knowing this until it was too late. His predicament is reminiscent of the plight of Top Fuel racer Cory McClenathan, who did not attend the Montreal race in 1992 and finished a close second to Joe Amato at the end of the season. To his credit, McClenathan never complained much about the 1992 season, and Johnson isn’t about to bemoan his luck either.

“Actually, I was registered to go to Ennis [Texas] because I thought it would help me finish in the Top 10, and then two weeks before that race we blew up a ProCharger and hurt the engine so I backed out and made plans to go to Las Vegas instead,” said Johnson. “Knowing what I know now, I would have tried to find another car to take down there. I even have another car that I could have raced but it’s only a 7.50 car so I didn’t think I could qualify. There were 33 cars on the entry list for Dallas and I didn’t want to be No. 33. I could have just gone down there and got the ten points for going through Tech but who knew at the time?”

Once he got to Las Vegas, Johnson went to work with a win at the Division 7 Lucas Oil Series race and also went a few rounds at the JEGS SPORTSnationals before that event was postponed due to high winds. A week later, Johnson won the Dodge NHRA Finals presented by Pennzoil. At that point, was well aware that he was still in the running for the title.

“In Las Vegas, I made a couple runs on test day and then looked at the points. I saw that if I could win all three races, I could win the whole thing,” said Johnson. “There were 17 rounds left and I joked that I just needed to win all 17. It was funny at the time because no one does that. Then the win lights started coming and they didn’t stop. I honestly didn’t feel a lot of pressure because every time I won a round, I just looked at it as moving up in the Top 10. I thought, ‘Maybe I’m going to be fourth instead of fifth.’”

Even as he staged against Nero in the final of the SPORTSnationals with the title on the line, Johnson didn’t succumb to the pressure. He was first off the line with a .009 light and took the stripe, but broke out with a 6.20 on his 6.22 dial. Nero also broke out but was .002-second closer to his prediction. 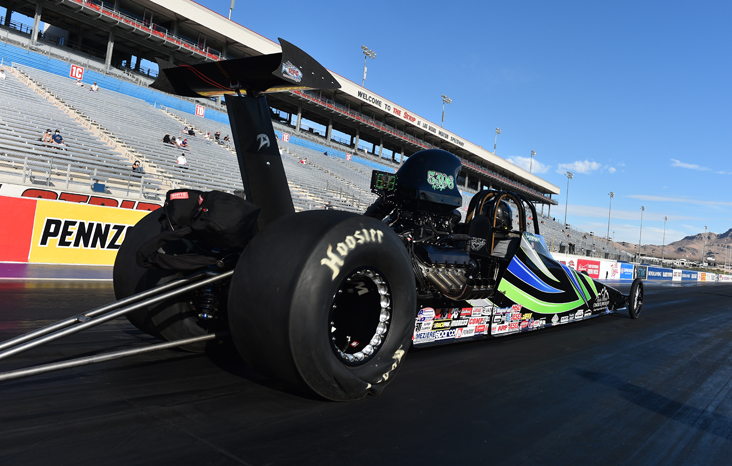 “When we came back [for the SPORTSnationals] I was supposed to race Dan Lafferty, but he didn’t come back, so I had a bye run,” Johnson said. “In the semi’s I had Dawn Barth and I definitely had some nerves. She’s from Denver and we race in the Fast 16 races back home. It was tough but I got by. Once I got past the semi’s I seemed focused and it was sort of the same way for the final. I knew that I’d either be No. 1 or No. 2. I did a good job on the starting line, but the car was a little quicker than I expected.”

Even though he lost the championship, Johnson didn’t have much time to dwell on it. He also made it to the Super Gas final at the SPORTSnationals and delivered the goods, winning his third Wally in as many weeks.

“I got the right trophy, just not in the right class,” he said. “Honesty, it’s great to win anytime.”

Proudly carrying a No. 2 on his dragster for the 2021 season, Johnson is also pragmatic about his hopes for another shot at a title at some point in his career. He’s not yet 26 years old so there figure to be ample opportunities in his future. He also has a strong support system that includes his parents, Greg and Kendra, Tony and Kari Stark of OnTrack Performance, Bob Reinhardt of Madcap Engines, and Pro Mod racer Derek Menholt.

“Hopefully, I have another shot at this,” said Johnson. “Who knows? I could be once in a lifetime. I wish I’d gone to just one more national, but you can’t control it. You can’t go back in time. Overall, I still had a pretty good year.”