Behind the Numbers: Kalitta has been great, now he just needs a little luck

The Mac Tools driver started the season with a victory with skill, hard work, and a little help from a horseshoe.
15 Feb 2018
Jacob Sundstrom, NHRA National Dragster Associate Editor
Behind the Numbers

Few crew chiefs capture a moment like Jim Oberhofer. After Doug Kalitta snagged a semifinal victory against Clay Millican at the season-opening Lucas Oil NHRA Winternationals presented by ProtectTheHarvest.com, Oberhofer delivered some colorful language before saying, “We just got lucky. That’s it.” Kalitta won with a 3.866 across from a 4.860 as both cars hazed the tires early, and the Mac Tools pilot got enough cylinders to re-fire, forcing his dragster across the stripe first.

Luck is not something Kalitta enjoyed a lot of in 2017. He ended up on the wrong end of many close races during the 2017 season, keeping from reaching the winner’s circle until the opening Countdown to the Championship race in Charlotte. That’s despite being one of the better leavers in the class (fourth, with an average reaction time of .067) and having a very consistent dragster.

Neither of those things match up with the narrative built around Kalitta, but as is often the case in sports, where colloquial wisdom reigns supreme, not all stories pass the smell test. For as much as racers, crewmembers, media members, and fans will tell you they believe in luck one moment, it’s rarely accepted as an explanation when things go awry. 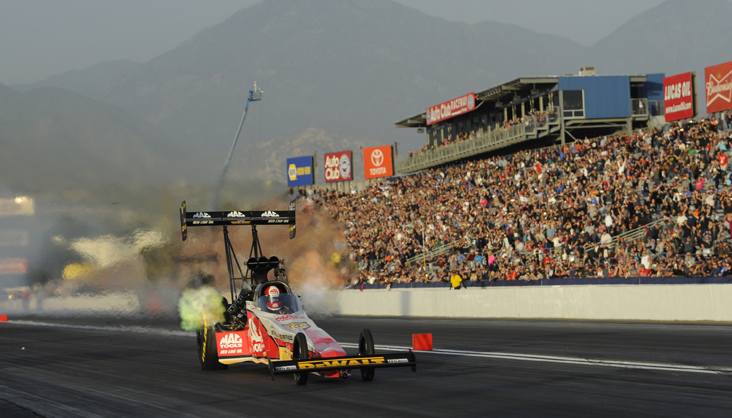 What’s striking is how similar the driver’s average elapsed times are within these ranges. Kalitta (3.748), Torrence (3.744), Brown (3.747), and Schumacher (3.747) are all within four-thousandths of one another, and Pritchett (3.736) and Force (3.729) aren’t far off. Reaction time comes into play, of course, but I’ve already established Kalitta is among the best in the sport by that metric, and his car is just as quick as the other heavy hitters in the class.

Which is to say — it’s very close. Torrence and Brown separate themselves in consistency. Torrence and the Capco boys get down the track quicker than 3.8 seconds 76.3 percent of the time, compared to 69.2 percent of the time for Brown and the Matco Tools team. Kalitta comes in third (58.6), followed by Schumacher (56.9), Force (56.6), and Pritchett (54.6). Quick is only useful if it happens consistently.

All that to say, turning on four win lights on Sunday requires a competitive car (Kalitta has that), a good driver (check), and sometimes a little luck. The recipe doesn’t specify the ratio. Locking up that elusive first championship? That calls for a pile of round-wins, preferably throughout the entire season, though packing a bunch of them in the final six races is probably a good idea. It seems aiming for two or three wins in the Countdown usually does the trick, depending on your regular-season performance.

Over the past two-plus years, Brown and Torrence each have 11 wins, Force has seven, Pritchett owns five Wallys, Schumacher has three, and Kalitta now has six of his own. Turning this start into his first Top Fuel championship will require Kalitta to keep doing what he has been doing the past two seasons. He’s also going to need more luck than he has gotten over the past two years. That’s not a bad thing — the drivers he has been facing off with have been getting it, too.