Like a last-second field goal or walk-off home run, the Super Comp victory at last weekend’s Division 4 Lucas Oil Series event at Thunder Valley Raceway Park in Nobile, Okla., was a game changer. Williams, the 2014 NHRA Stock national champ, needed a clutch performance to unseat incoming leader John Labbous Jr., and he delivered with a holeshot win over Chase Huffman in the final round. With the win, Williams jumped into the lead in the Super Comp class with a robust score of 687 points, and with time running out on the 2017 season, he likes his chances of staying there. 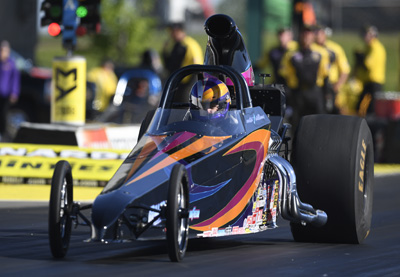 “It’s not over yet, but I think I’ve got a pretty good score going,” said Williams. “I was actually on the other side of this last year. I was leading and then Nick Folk went to Silver Dollar [Division 2 Lucas event] and won, and I finished second by less than a round. I’d rather be on this side of it.

“I like my score. I think it’s a great score if it wins. If it doesn’t, it wasn’t for lack of trying. I feel good in the 680 range. When you have 640-650, that’s usually susceptible. The year I won in Stock, I had 712 points and Jimmy Hidalgo went to four or five finals and got really close so you just never know.”

Williams knows a thing or two about racing for a championship. Since 2013, he has raced in both Stock and Super Comp, and he has posted six out of a possible eight top-10 finishes. Williams won the Stock title in 2014, and he finished second on three other occasions. He was the runner-up in Stock in 2015 and the second-ranked Super Comp driver in 2014 and 2016. Last season, Williams finished just nine points behind eventual champ Folk in the battle for the Super Comp title. Williams believes that experience has not only helped make him a better racer, especially during late-season championship battles.

“All year I’ve been saying, ‘Please don’t let me finish second again,’” said Williams. “It helps that I’ve been here before. The funny thing about Super Comp is that I’ve always been a door car guy, but I love the math aspect of Super Comp. There are a lot more variables, and it’s a different challenge. I’ve also worked my butt off to nail down a combination that worked in Super Comp. I’ve gone from a 150-mph car to 170, and I’ve got a combination that I really like. It just took 10 years to perfect it. If I can hold on and win [the championship], it will be worth all the hard work.”

Earlier this season, Williams won the Menards NHRA Heartland Nationals in Topeka, and then followed a short time later with a runner-up finish at the JEGS SPORTSnationals in Bowling Green, Ky. Those two events provided a lot of valuable points, but his championship drive didn’t kick into high gear until he returned to Heartland Park Topeka in late July for the annual West Central Division double-header weekend. There, Williams drove his dragster to runner-up finishes in both events. The sting of losing two final rounds was mitigated by a huge points haul. Even though he didn’t win, Williams was able to add a massive 208 points to his total because the Super Comp field in Topeka had more than 128 entries. In that event, a runner-up finish is worth 104 points, just one point less than a win in a smaller field.

“Between the two divisional races and the national event, I have 313 points just from racing in Topeka,” said Williams. “Obviously, it’s been a good place for me. I’ve said for years that those [double divisional] races are great if you get on a roll, but if you’re bad, they can be really bad. In my case, it was a great weekend." 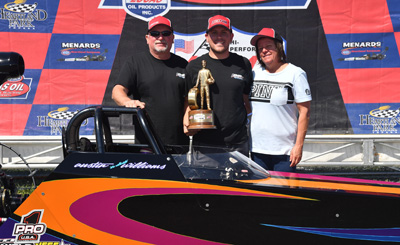 At the Nobile event, Williams passed Labbous when he got to the quarterfinals, where he also got a semifinal bye run. He has got a sizable lead but isn’t out of the woods yet. Labbous cannot win the title and neither can four-time champ Gary Stinnett, since both are done collecting points. Fourth-ranked Luke Bogacki is still mathematically in the running, but just barely. Bogacki can claim points at one more national event and one more divisional event. He must win both of them to have a shot. Given his history, that is not out of the question. Defending champ Nick Folk and Marco Perivolaris are both still in the running for the 2017 title, but any scenario for them to overtake Williams would likely have to involve multiple wins.

“I’ve got some really tough guys behind me, including two guys who won championships in the last five years,” Williams said. “Either one of them could do it. The crazy thing about Luke is that we were talking on Saturday and we could have raced each other at six cars if we both made it there and that would have been for the lead and maybe the championship. I’m kind of glad he wasn’t there, especially the way I drove. I did just enough to win. It was cool to race Chase Huffman in the final, though. We grew up five miles from each other and we’re a month apart in age. I don’t think we’ve raced in a final since our Jr. Dragster days. That was fun.”

Three months ago, Labbous Jr. appeared to be a near-lock to win either the Super Comp or Super Gas national championship or possibly both. Now, he might not win either. Labbous has enjoyed an incredible season in NHRA Super class competition with nine wins in 12 final rounds. He has also scored 648 points in Super Gas and 658 in Super Comp, but he has fulfilled his quota of events for the season. Williams officially ended his dreams of a Super Comp title last week, and it’s entirely possible that Division 6 racer Chris Cannon will do likewise in Super Gas. Cannon became a legit Super Gas contender after winning four NHRA Lucas Oil Drag Racing Series events in his home division. He then went on to a runner-up finish at the Sonoma national event. Cannon has only attended two national events this season, so he’s eligible to improve his score at any of the final three races in Dallas, Las Vegas, or Pomona.

Cannon currently has 595 points while Labbous has 648. However, Cannon will add 30 points to his total even if he loses in the first round at this week’s AAA Texas NHRA FallNationals in Dallas. If Cannon can win three rounds, he’ll pass Labbous and will very likely win the title.