Behind the Numbers: Langdon prepares to make switch to Funny Car

“I drove terrible the first three runs. I felt so messed up, so uncomfortable. Apparently, I looked a lot better than I felt.”

That was Shawn Langdon’s assessment of his first three laps in a Funny Car. His fourth lap went much smoother after the team made some adjustments to Alexis DeJoria’s flopper. Following DeJoria’s retirement, the Funny Car is now Langdon’s. He made his last race, at least for now, in a Top Fuel Dragster at the Auto Club NHRA Finals, and the Tequila Patron car will become the Global Electronic Technology car in 2018.

Shawn Langdon makes his first pass as a Funny Car driver. A 5.15 run down the right lane. pic.twitter.com/tNWzjCQoy6

“We made some changes on the fourth run, just some small changes, like some steering and some other little things and I felt a little more comfortable and I made a good run,” said Langdon. “Everything is so backwards.”

That’s a common refrain for drivers who make the switch from Top Fuel to Funny Car. It doesn’t matter how prepared, mentally or physically, the driver is. That first ride in a Funny Car always packs a punch. Heck, so does the second, third, 13th, and 300th. It took J.R. Todd time to get comfortable in the DHL Funny Car, too; Kalitta had to pour the driver a new seat ahead of the fourth race of the season.

“I figured we’ve got some time now to make it the way I want so let’s make it right,” said Todd at the time. “In these things, you need to be sitting more straight up and over the wheel. It makes a big difference.”

Langdon said the new view doesn’t affect him too much because of the way he tapes off his helmet. Before driving with Kalitta Motorsports he drove a dragster with a canopy, which also featured a narrow view, similar to what he’ll experience while driving a Funny Car. So, that’s at least one change that won’t be completely foreign to the 2013 Top Fuel champion. 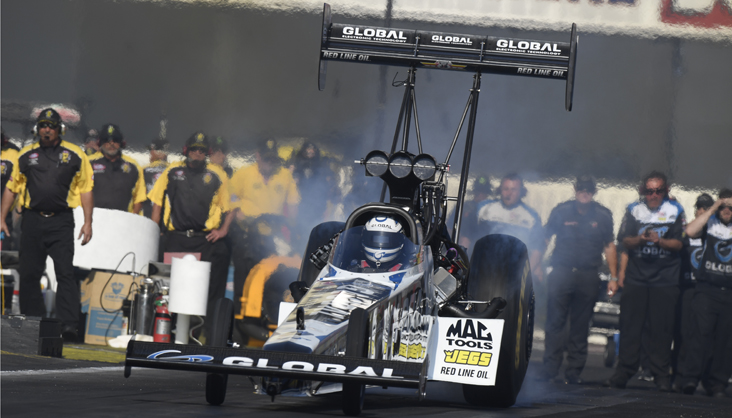 Getting a handle on the steering is another matter entirely. When Langdon talked about how “backwards” driving a Funny Car is, that’s what he was referring to. This is also a prime example of needing lap time to get comfortable driving in a new class. Taking pointers from other drivers can only get you so far.

“There’s a little misconception. All the Funny Car drivers preach is how much you gotta steer these things and you gotta manhandle the car,” Langdon said. “So, I get in it, and I’m thinking, ‘alright I gotta bow up and drive this sucker.’ So, I get out there and the first couple runs, I can’t even get it to 300 feet. And they’re like, ‘yeah, you’re oversteering it.’  And I said, ‘I thought you have to steer the Funny Car a lot.’ They said, ‘yeah, down track, but you’re driving it like it’s a dragster early.’”

That’s part of the learning, or unlearning process, as Langdon switches from a Top Fuel driver to a Funny Car driver. Some of his experience in the “other” Nitro class will help (odds are he’ll instantly become one of the best leavers in the Funny Car class after finishing the 2017 season with the best Top Fuel reaction time average), while other parts of his muscle memory will need to be unlearned.

“The hardest part about driving a dragster is the first 80 feet, and then when it locks up, which is about half track,” said Langdon. “If you can get the thing straight by 100 feet, you should be good. Then, just drive accordingly and hopefully it doesn’t make a big move. Just hold it there. In Funny Car, you almost have to have the thing pointed correctly to account for what it’s going to do on the launch, because it’s going to want to go left because of the torque of the thing.”

It’s not uncommon for drivers to have the steering wheel cocked to the side to account for the torque Langdon is referring to. He didn’t want to change too much of the car’s setup because DeJoria drove the Funny Car in Pomona, but it wouldn’t be surprising if he sets the wheel a certain way when it becomes his car during the 2018 season. While what he needs most is seat time, he is getting a little advice from Todd, who made the switch from dragster to Funny Car this year.

“I like what J.R. is doing, because he’s telling me stuff -- but not too much stuff, so I can learn on my own,” said Langdon. “When people come to me for help, I don’t want them to ask me generic questions, because that’s not how you learn stuff. I want to give you subtle hints so you can figure stuff on your own. I just need seat time. I need laps to learn how the car works.”

He doesn’t want those laps to be light, either. When he talked to his future crew chiefs, Nicky Boninfante and Tommy DeLago, he said he wanted to go all out right from the get go.

“I said, ‘I want you to set a record lap in it,’” said Langdon. “If I hit the gas right now and it lights up 3.79 on the scoreboard or it says 4.00, I won’t know the difference. Show me what it can do. I want to know. Give me all its got. The first run, it was probably going a 3.85 before it smoked the tires, but I was steering a lot. So, I know what it’s got, and I’m not scared of the speed or anything. It’s just getting to know the input steering.”

Langdon closed out his final Top Fuel season, at least his last for the time being, by making a late push up the leaderboard. He earned the fifth-most points during the Countdown, helping him move into seventh place to finish the season. The pair of runner ups won’t satisfy the driver, but adding his name to an already competitive class just might make Funny Car the toughest category in NHRA Drag Racing.

And it won’t be long until he picks up his first Wally.