Behind the Numbers: Rounding out our evaluation of drag racing performance

Averaging elapsed and reaction times is good, but rewarding consistency is just as important. That's where success percentage comes into play. You already have an idea of who excels at it, now we're going to put numbers next to the faces.
08 Mar 2018
Jacob Sundstrom, NHRA National Dragster Associate Editor
Behind the Numbers

Getting from the starting line to the finish line quickly is essentially the stated goal of a drag race. Yes, doing so more quickly than the person in the other lane(s) is a major part of the equation, but you can (probably) only control your own vehicle. So, any statistical analysis of the quality of a drag racing team should look at both how quickly the car/bike gets down the lane and how often it gets down said boulevard.

That’s where success percentage comes in. The idea is to create a percentage that shows how often a racer gets to the finish line within a certain amount of time. The subjective portion of this percentage is that “certain amount of time.” I’ve come up with solid numbers for each of the four Professional categories, but these are still open for debate; after all, what’s a good sports statistic without a little healthy debate? 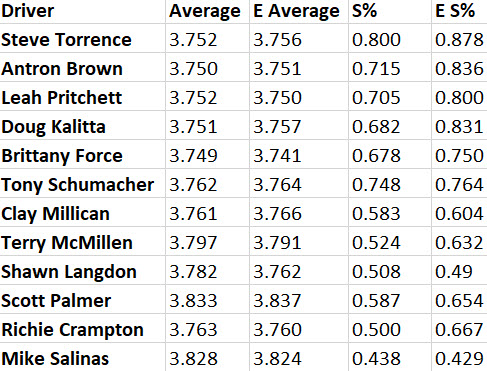 In Top Fuel, anything quicker than 3.9 seconds gets you a passing grade. So, here’s how the formula works: All runs quicker than 3.9 seconds are divided by that racer’s total number of runs to calculate their success percentage. The number you’re really looking for, of course, is the eliminations success percentage (ESP, for short). That’s just as easily calculated by only looking at eliminations runs.

The chart on the right (and every other chart in this post) shows all the driver’s available stats starting in 2016 and running through the 2018 NHRA Arizona Nationals.

By looking at this percentage in conjunction with the average elapsed time of all runs quicker than 3.9 seconds, you can start to get an idea of who has the best car. You can take that a step further by looking at reaction times; that takes you from the best setup to who has the best overall chance of winning on race day. Before we move on, and look at some numbers from the 2017 season, here are the cutoffs I came up with for the other three Professional classes. 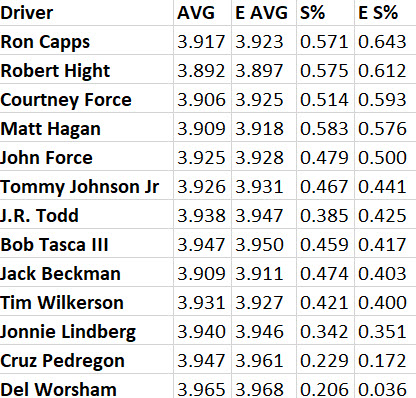 In a previous piece (this one, in fact), I referenced both a 4-second and 4.5-second cutoff. This is the tough, human part of the equation (and I imagine it will cause more debate than any of the other cutoffs) because some Funny Cars run slower than 3.999 seconds. I chose to use 4 seconds because that’s what it takes to win races. Here are the numbers to back that up.

Of the 704 Funny Car eliminations runs made in 2017, 299 were made quicker than 4 seconds. Of those 299, 224 resulted in the car moving to the next round (via a win or a runner-up in the NHRA Four-Wide Nationals). That’s a 74.9 “winning percentage.” If you bump the cutoff to 4.5 seconds, the winning percentage drops to 64.2 percent. As cars get quicker from top to bottom, it’s imperative to try to capture a representative average. That means taking an average elapsed time of successful runs – in Funny Car, those are runs that come quicker than 4 seconds. 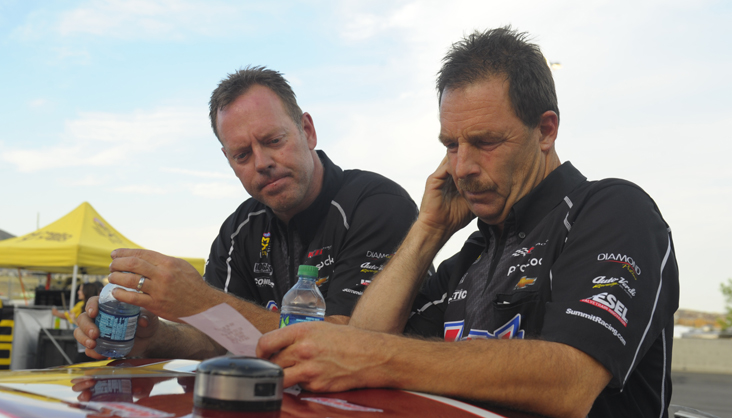 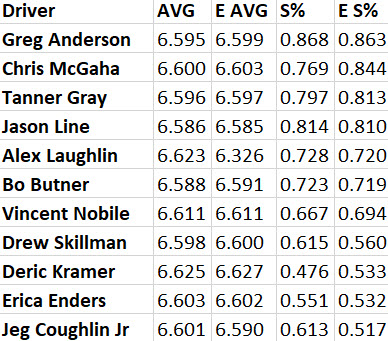 I started by using the same number for both Pro Stock and Pro Stock Motorcycle, which may seem odd at first, but when digging into the numbers, I discovered how fungible this cutoff could be. Most Pro Stock and Pro Stock Motorcycle runs end successfully because the tuners are so damn good at their jobs, and unlike their nitro counterparts, there isn’t much “pedaling” when things go awry. You either get down the track in the 6-second range, or you don’t get down at all.

Still, getting a little deeper revealed the number I used for average elapsed times back in our Year in Review issue (that’s 25 of Volume 58 of National Dragster, or just the last issue of 2017 if you prefer) is the way to go. Unless we’re running in Denver, or it’s 100 percent humidity, this is about what it takes to win a race in the naturally aspirated category. The name at the top of the list will make sense to you if you’ve been paying attention: Greg Anderson.

It also highlights some racers who probably don’t get enough credit for how consistently they get down the track (Chris McGaha), and points out why Elite Motorsports struggled so much last season. Again, this is just one number that needs to be looked at in conjunction with elapsed and reaction times, but it’s a good place to start when thinking about how good a racer is on elimination days. 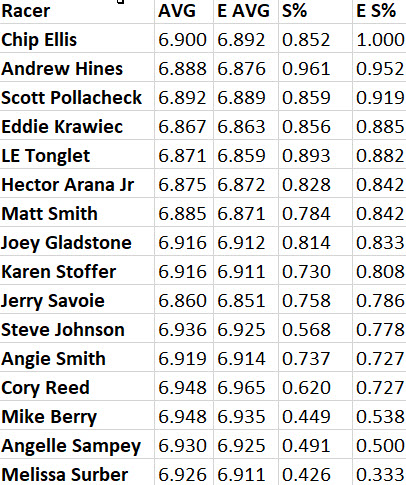 The cutoff for Pro Stock Motorcycle was simple (and everyone loves a round number), plus it gives us names near the top of the list that everyone can live with. Chip Ellis, in a small sample size on two different bikes, and then Andrew Hines. Follow that up with another deadly consistent rider in Scotty Pollacheck, who made huge strides in 2017.

We then get to our two biggest contenders for the 2017 championship: Eddie Krawiec and LE Tonglet. The two got to the top with consistent passes and quick times. You’re probably starting to sense a pattern, so I won’t repeat myself here. All sports are looking for a catch-all, one-size-fits-all statistic, and the truth is that finding one is exceptionally difficult (and let’s be honest, above my pay grade). The smart money is on looking at a few different numbers and making an informed judgment. This is just another to add to the pot.