Behind the Numbers: Funny Car will tighten up down the stretch

Matt Hagan earned back-to-back wins and Ron Capps looks like a contender again thanks to adjustments made by their championship crew chiefs.
12 Jul 2018
Jacob Sundstrom, NHRA National Dragster Associate Editor
Behind the Numbers

Courtney Force holds a 155-point lead over Matt Hagan with five races to go before points reset entering the Countdown to the Championship. Ron Capps led Hagan by 188 points at the same point of the 2017 season and wound up capturing pole position entering the Countdown with a sizable cushion. That doesn’t mean Force has this sucker locked up, but Hagan has his work cut out for him and will need some help to catch up to the current points leader before the Countdown begins in Reading.

In truth, it doesn’t matter if Hagan overtakes the driver of the Advance Auto Parts Chevy Camaro following the Indy event. For those needing a refreshing, here’s where the points reset when the Countdown begins with the Dodge NHRA Nationals in Reading, Pennsylvania. The key is to have a competitive car and preferably be in the top five when it begins.

A team can win from anywhere in the top 10 but setting yourself up for success feels a lot better than hoping for a miracle. Both Hagan and Don Schumacher Racing teammate Ron Capps look poised to strike during the Western Swing thanks to the tireless efforts of their crew chiefs; that should set both teams up for a chance at another championship this fall.

Hagan opened the season with a victory at the Winternationals doing what everyone know he and crew chief Dickie Venables could do: Open a can of whoop ass on opponents. Consistency hasn’t ever been a problem for the Mopar Express Lane team, but it’s also not its calling card. Over the past two races, Venables made strides in both consistency and over the middle portion of the track – something particularly impressive when it gets hot, as it was in Epping.

While the Mopar Funny Car dropped a bit of elapsed time to the 60-foot clock compared to the field, it picked up .026 second in the second interval (60-330 feet) and another .008 second in the third interval (330-660) feet. Furthermore, the team snagged another .01 second over the last 340 feet to improve .041 second over the field over the last two races. It’s not a huge sample size, but four-hundredths of a second is a significant advantage in Funny Car. 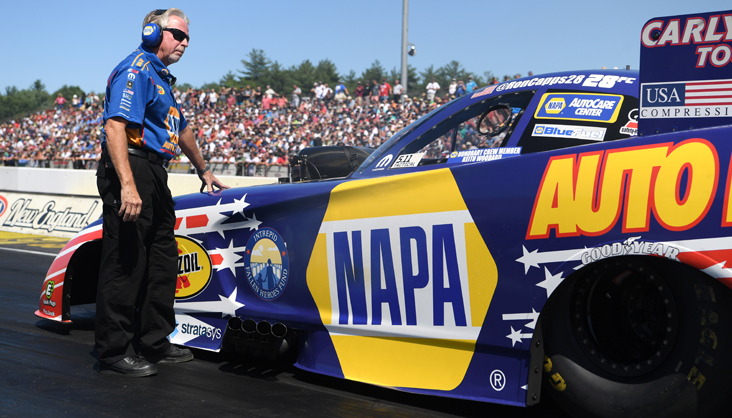 That’s a different area than where his teammate found success. Capps and tuner Rahn Tobler switched back to the five-disc clutch ahead of the four-race swing and immediately got back into a more consistent groove. Speed and elapsed time won’t ever be the major factors for race wins for the NAPA Auto Parts Funny Car but getting down the drag strip consistently will be.

Since switching to the five-disc clutch, the NAPA car has made it down the strip quicker than 4.3 seconds 24 out of 30 tries. That’s an improvement on 27 out of 45 tries while running the six-disc. Consider this: While the six-disc was certainly more temperamental at first, Capps and Tobler ran it in more favorable conditions (Pomona, Phoenix, etc.) than the five-disc (Bristol, for instance).

Hagan gets down the track more consistently than any other Funny Car (76.3 percent), and he has the fifth-quickest car in the class (4.029). Force is no slouch, clocking in just three-thousandths quicker and slightly less consistent (67.1 percent) but with significantly better average incremental numbers. That might indicate crew chiefs Brian Corradi and Dan Hood have her Chevy more finely tuned at this point of the season. 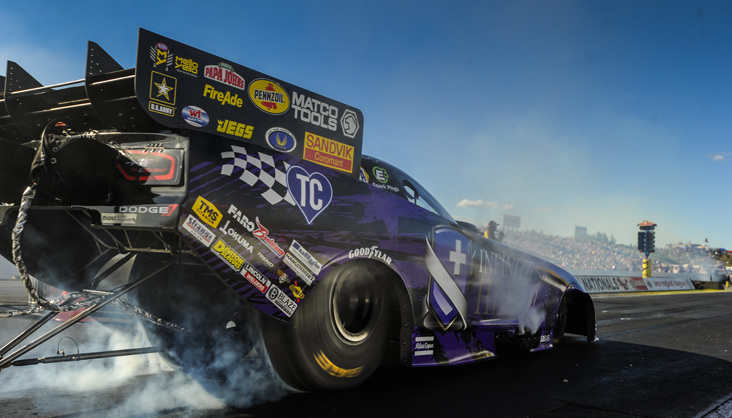 But there’s still plenty of racing to come. By the time the Countdown rolls around, what once seemed like a dominant lead for the Advance Auto Parts team will very likely have dissipated. That won’t be due to a failing by John Force Racing. It was only a matter of time before crew chiefs like Venables and Tobler caught up – and drivers like Hagan and Capps never slowed down.

They’re not the only ones, either. Jack Beckman and J.R. Todd are two of the best drivers in the class and their cars aren’t far from turning things around. Todd has a Funny Car capable of winning right now, while Beckman has one of the most consistent floppers in the category. The race to the Countdown isn’t just happening on the track – it’s happening in the pits as crew chiefs try to get their cars on the right path before it’s too late.