Behind the Numbers: Clay Millican may finally have consistency he needs

After four clean passes led Clay Millican to victory at the Menards NHRA Heartland Nationals presented by Minties, it seems good things are on the horizon for the Great Clips/Parts Plus team.
23 May 2018
Jacob Sundstrom, NHRA National Dragster Associate Editor
Behind the Numbers

One of the toughest humps to get over with people who don’t get statistics is this one: Stats don’t tell the whole story.

That’s true, and no one who gives two turns of a wheelie bar about them will tell you they do. At least, one stat by itself doesn’t. That’s why when I tell you Clay Millican drives the quickest Top Fuel Dragster I offer a couple of qualifiers. First, I’m telling you he drives the quickest dragster based on the average of his runs this season, and I’m only including runs quicker than 3.9 seconds (because early shutoff runs and tire-smokers aren’t doing us any good).

Second, I’ll give you a second number: Following his win at the Menards NHRA Heartland Nationals presented by Minties, 38.5 percent of his runs have been quicker than 3.9 seconds. That’s below the class average of 44.4 percent. That matches the eye test. Millican and crew chief David Grubnic would tell you themselves they’ve got a quick car, but not a consistent one. At least, perhaps until they made four clean runs in two different weather conditions during eliminations in Topeka.

Millican’s average elapsed time is 3.747 seconds, a full hundredth of a second better than Steve Torrence (3.76) and Tony Schumacher (3.761). Both of those dragsters have been significantly more consistent. Torrence gets down the track 62.3 percent of time, and Schumacher does so at a 62 percent clip. All of that provides valuable context. No sport has a perfect catch-all statistic and drag racing is no exception. That’s a good thing. 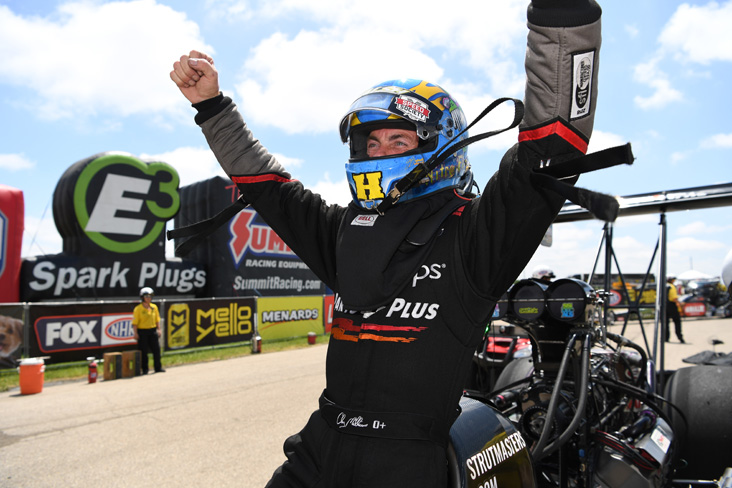 The goal is to provide as much information as possible and let fans, drivers, crew chiefs, broadcasters, and anyone else who loves the sport do what they’ve always done: talk drag racing. So, while Millican has had an inconsistent car based on the balance of the season, recent history indicates something may have changed. Let’s put on our speculation hats for a second.

The track was very cool during the first two rounds of eliminations, and it never exactly got hot even when the Tennessean rolled to victory against Terry McMillen (103 degrees, according to dragracecentral.com). It’s still encouraging to note Grubnic got the machine down the strip smoothly in differing conditions without putting holes out, which has been a problem for the team for the past few seasons. Finding grip on a cool track hasn’t been a problem — remaining hooked up halfway down the track? That’s a different story.

This is still a very small sample size, though. Like Erica Enders (who we can now, in my opinion, officially say is back in business), it’ll be a few races before we can feel comfortable making a judgment call on whether this is a permanent change for Millican. When Enders made more consistent, and quicker, runs in her Jerry Haas-built race car, it seemed legit, and now it’s clear that it was. The two-time champ is, in my mind, a contender for a Pro Stock world championship because she’s (in my opinion) the best driver in the category and now has a great car underneath her.

If Millican gets a consistent car, he’ll also be a factor alongside Schumacher, Torrence, Brittany Force, Leah Pritchett, and even McMillen for a championship at the end of the year. Top Fuel is getting more competitive the longer the season goes on, which is great news for fans of the class. This recent improvement for Millican has been a long time coming, and it couldn’t happen to a better ambassador for the sport.