Behind the Numbers: Hines and Krawiec identical through three races

Eddie Krawiec and Andrew Hines form the most feared team in the Pro Stock Motorcycle category. You don’t need to ask, just check the receipts. No team claims as many wins as the riders of the Vance & Hines Screamin’ Eagle Harley-Davidson Street Rods (93, to be exact), including last weekend’s victory at the NHRA Southern Nationals Powered by Mello Yello. While every team, including the Harley-Davidson boys, hopes for both bikes to run as evenly as possible, it’s a nearly impossible task for myriad reasons.

First, no two bikes are truly identical. Every piece of pipe has its own idiosyncrasies, or personalities, if you prefer. Second, every rider, well, rides differently. Krawiec doesn’t ride quite like Hines, and Hines doesn’t ride quite like Krawiec. That’s just the way it goes. So, it should come as quite a shock that not only have both bikes gone right down the strip on all 21 of the pair’s runs this season (yes, they’ve made the same number of runs — creepy), they’re averaging the identical elapsed time.

That’s right, Krawiec’s average elapsed time is a class-best 6.858 seconds — and so is Hines’. Okay, so they possess the same e.t. to three digits. Extend it to a fourth, fifth, and so on, and you’ll get something a little different, but don’t ruin a weird thing. Despite a relatively small sample size in the Pro Stock Motorcycle season, it’s extremely impressive that the Harley-Davidson team bikes have managed to run so evenly so far. But wait, things get weirder.

When Krawiec and Hines switched back to their old chassis (while retaining their new Street Rod bodies) at the Chevrolet Performance U.S. Nationals last season, the biggest improvement was in their 60-foot times. The Harley-Davidson motorcycles are notoriously a little slower than the high-revving Suzukis at the beginning of the track but make up for it with great back-track performance; that’s an area tuner Matt Hines (and the rest of the crew, of course) continues to fuddle with. 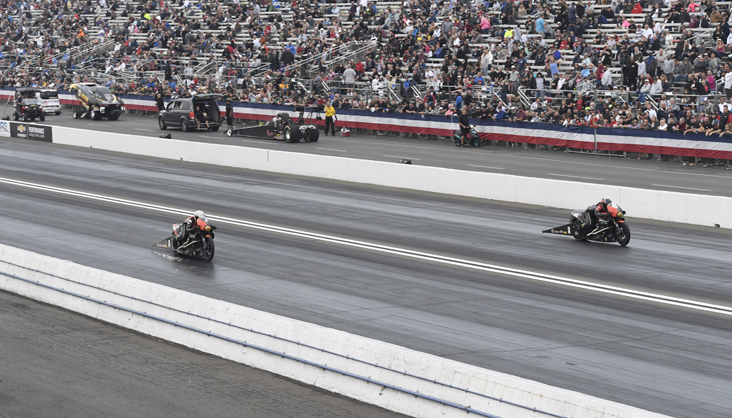 While the team remains middle of the pack this season, the riders are, once again, identical to the 60-foot marker with a 1.083 average. Jerry Savoie leads the field with a 1.057 average, to give you an idea of what they’re up against. Krawiec finished last season with a 1.082 average while Hines notched a 1.086. It’s worth noting Krawiec had a 1.074 through this point of the 2017 season with 20 runs to his name, while Hines had a 1.082 with 19 runs – all of that was with their old bodies and chassis; so not quite an apples-to-apples comparison.

“That’s astonishing,” Hines said. “I guess we’ve both had our highs and lows then. One of us hasn’t run away from the other. He’s been pretty quick as of late, though I qualified better than him in Atlanta. We feel we aren’t quite where we need to be yet, but that’s mainly due to our 60 foots. You’ll see that with our average numbers. Right now, we have a setup that goes by the Christmas Tree pretty fast, and that makes a difference on Sunday.”

While the Street Rods are clones, they’re not tuned identically. Hines shed some light on where the two may differ from one run to the next.

“We’re constantly trying different stuff with my fuel and timing tune-ups,” he said. “Eddie is kind of the standard over there. I try to, but that’s because I can’t keep myself away from the keyboard. My dad is joking that I need to program something into the computer to loop myself out of it.”

Despite leading the class in average elapsed time three races into the season, Hines feels there’s room to be gained through the first 60 feet of the racetrack. More specifically, he sees the first 3 feet of concrete as a problem area for the Harley-Davidson machines. That’s nothing new, though there’s been a bit of regression for both bikes since the end of last year.

“[The Auto Club NHRA Finals] was one of the best of my career, and we were consistent all through the Countdown [to the Championship],” Hines said. “I kind of got away from it in Gainesville and Charlotte. The Suzukis and a lot of the other bikes with great 60 foots create that in the first 3 feet. We create ours from 3 to 60 feet. We’re going by the Christmas Tree faster than these guys, so once we nail those first 3 feet, we’ll be getting somewhere.”