Behind the Numbers: Vincent Nobile's return to the winner's circle

There’s still work to do for the Mountain View Tire team, but this is a shot in the arm for Nobile and Elite Performance.
12 Apr 2018
Jacob Sundstrom, NHRA National Dragster Associate Editor
Behind the Numbers

When Vincent Nobile won in Reading in 2016, he did so in his third final round of the season. He previously lost to Allen Johnson in Denver (of course) and Aaron Strong in Seattle. The Western Swing wasn’t for him that year, clearly, but Nobile got the job done closer to his hometown of Melville, N.Y. That victory came at the start of the electronic fuel injection era when Nobile was near the top of the Pro Stock pecking order and looked primed for more.

His average elapsed time in 2016 (6.626) tied him with Shane Gray for fifth in the class, and he boasted the fourth-best reaction time (.0347) among full-time drivers. At 24 years old, Nobile represented the future of the class — in many ways, he still does as a piece of a collective. He, alongside Alex Laughlin and Deric Kramer are the bright future of the tightest Professional category in NHRA Drag Racing. Unfortunately for Nobile, the second act of his movie, the part between his 2016 Reading win and his win at the 2018 Denso Spark Plugs Four-Wide NHRA Nationals, stunk.

That wasn’t for a lack of effort by Nobile, Elite Performance, or any human being who tried to make his Mountain View Tire Chevy Camaro get down the track. The purple machine picked up elapsed time over the course of the season, improving to an average elapsed time of 6.611, but it wasn’t enough to stay competitive as the rest of the class got the hang of racing with EFI. Nobile slipped toward the bottom of the pack, as did most of the Elite Performance garage. Things weren’t working.

While KB Racing and Gray Motorsports averaged times in the 6.50s, Elite stumbled. This wasn’t the wide-open parity everyone became accustomed to. While Nobile and his teammates remained excellent on the Tree (Erica Enders, Jeg Coughlin Jr., and Nobile were all in the top five in reaction time average in 2017), it wasn’t enough to get Elite to the winner’s circle more than once. Enders won in Epping, Coughlin reached the final round in Topeka, and Nobile made the final in Englishtown. 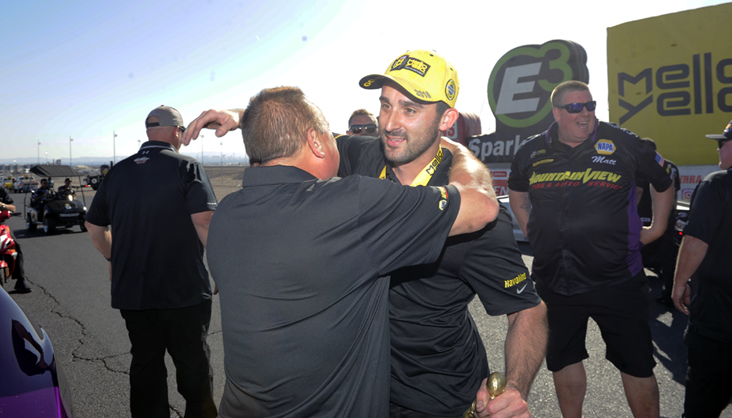 Then team owners Nick and Irene Mitsos made an incredibly tough decision: they parked Nobile’s Countdown to the Championship-qualified Camaro after the fall Charlotte race. The Mitsoses ordered a brand-new Jerry Haas-built race car to be ready for the 2018 season, and the entire Elite Performance team went to work on what would be a full-time four-car team as Laughlin came out for a full pull. Things were going to be different this time around.

While Nobile struggled during testing at Wild Horse Pass Motorsports Park in Phoenix, he felt confident heading into the Lucas Oil NHRA Winternationals presented by ProtectTheHarvest.com. That confidence was rewarded. The team looked fabulous right off the trailer and shot to the No. 1 spot, eventually grabbing Nobile’s first pole since his 2016 Reading victory. He fell to Kramer in the second round by .002 second, but the event felt like an announcement: the team has found its power.

Just three events later, Nobile’s average elapsed time (6.589) rivals Greg Anderson’s (6.584). After falling so far behind the KB Racing stable just a year ago, the Mountain View Tire team is catching up. One win does not make a season, but seeing validation plated in gold can mean the world for a team that’s worked so hard over the last year. Nobile remains one of the best leavers in the sport with a .0286 reaction time average, and it was that mark that allowed him to capture a .0007-second victory in the final round.

Pro Stock is going to be closer than ever this year if the points spread is any indication. Bo Butner holds a 124-point lead on 10th-place racer Enders; compare that to the 197-point advantage Anderson had on Nobile of all drivers a season ago. Nobile is only two rounds behind the defending champ this time around — what a difference a year makes. It’s too early to say he’s back, but man is it good to see him in the winner’s circle again.