Behind the Numbers: McMillen reinforces age is only a number in NHRA Drag Racing

Terry McMillen became the oldest Top Fuel winner in history in a season where we saw the youngest winner of all time in NHRA history.
02 Nov 2017
Jacob Sundstrom, NHRA National Dragster Associate Editor
Behind the Numbers

If there’s one thing to take away from the 2017 NHRA Drag Racing season, it’s this: Age is only a number. From Pro Stock rookie Tanner Gray winning at 17 to Terry McMillen winning at 63, we’ve seen drivers turn on win lights on both ends of the age spectrum. Gray became the youngest driver ever to win an NHRA drag race, and McMillen is now the oldest Top Fuel driver in history to earn a Wally.

McMillen, at 63 and nearly 4 months old, surpassed Eddie Hill as the oldest Top Fuel event winner. Hill was 60 years and 4 months old when he won the 1996 Denver event over Blaine Johnson. That doesn’t make McMillen the oldest event winner, not quite, anyway. It’s close, though. The driver of the Amalie Motor Oil dragster will have to keep turning on win lights for a few more years to earn that distinction.

When John Force defeated rookie Jonnie Lindberg at the Amalie Motor Oil NHRA Gatornationals earlier this season, he was already the oldest NHRA event winner (67 years, 2 months). So, beating the (at the time) 27-year-old Swedish Funny Car rookie just extended his “lead” as the oldest winner in the sport. Had Lindberg beaten the 16-time champion, he would not have become the youngest winner in Funny Car history.

That distinction belongs to current Funny Car veteran Del Worsham, who won his first race as a fresh-faced 21-year-old back in 1991 at the Southern Nationals. Lindberg had not celebrated his second birthday yet, and Force had only won one championship. How time flies.

While McMillen is the oldest Top Fuel event winner, he is certainly not the oldest competitor. That honor goes to Chris Karamesines. That’s not a tough trivia question for anyone who pays much attention to NHRA Drag Racing. “The Greek” has been racing longer than most current drivers have been alive, and the 84-year-old Top Fuel veteran has shown no signs of stopping. If he gets his first win, well, that might become an unbreakable record. 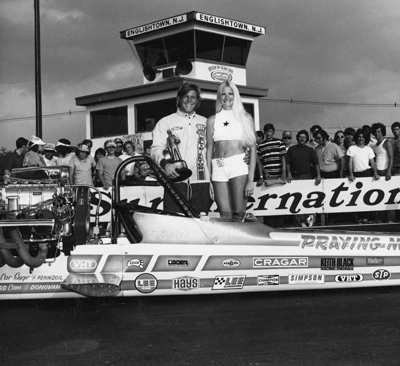 On the opposite side of the spectrum is Jeb Allen (pictured to the right), who was 17 years and 5 months old when he made his Top Fuel debut back in 1971. That’s the youngest in any class (all but Funny Car feature a 17-year-old as the record holder), and Allen went on to nine times over the course of his career. That includes a win as an 18-year-old at the Summernationals in 1972, making him the youngest Top Fuel winner of all time.

Allen hasn’t had much competition in that arena. The three youngest active winners in the Top Fuel categories are in their late 20s or early 30s, including Leah Pritchett (29), Brittany Force (31), and Steve Torrence (34). That brings us to one more fun stat: the biggest age gaps in final rounds this season, starting with the NHRA Toyota Nationals.

McMillen (63) and Force (31) gives us a 32-year gap between finalists. That seems large until you consider the gap between Gray (18) and Greg Anderson (56), a 38-year game. Then there’s the aforementioned Funny Car final in Gainesville between John Force (67) and Lindberg (27), a 40-year age difference. The biggest gap in Pro Stock Motorcycle (31 years) came in Brainerd between LE Tonglet (27) and Jerry Savoie (58).

Age is only a number; when the bulbs drop on the Christmas Tree, everyone’s got a shot to turn on the win light. Racers as young as Gray, and as experienced as McMillen, have proven that time and again. My guess is they’ll keep doing it, too.