Behind the Numbers: How Krawiec can clinch a title in Las Vegas

Pro Stock Motorcycle rider Eddie Krawiec can lock up his fourth championship at the NHRA Toyota Nationals in Las Vegas. Here's what needs to happen for the Harley-Davidson rider to do it.
23 Oct 2017
Jacob Sundstrom, NHRA National Dragster Associate Editor
Behind the Numbers

Eddie Krawiec can clinch his fourth Mello Yello Pro Stock Motorcycle Championship at the NHRA Toyota Nationals in Las Vegas. That such a thing is even possible is astounding given how many points (191) will still be on the table heading into the season-ending Auto Club NHRA Finals in Pomona. Krawiec put himself in this position by picking up more points through the first four races of the Countdown to the Championship (426) than any other racer.

Winning three of four races helps, as it turns out. His only stumble so far happened in St. Louis, where he bowed out in the second round to eventual event winner LE Tonglet. Krawiec’s victories in Charlotte and Reading earned him 122 and 117 points, respectively. His triumph in Dallas was even more bountiful, netting him 128 of a possible 130 points. That’s a nearly perfect weekend.

He now leads Tonglet, the rider with the best chance of keeping Krawiec’s hands off the trophy at the end of the year, by 107 points. That’s massive with only two races left on the schedule, particularly when you consider the following stats: Krawiec has one first-round loss all season, has gone deeper than the second round in four of the last five races that he has attended, and owns a round-win record of 34-8 this season. 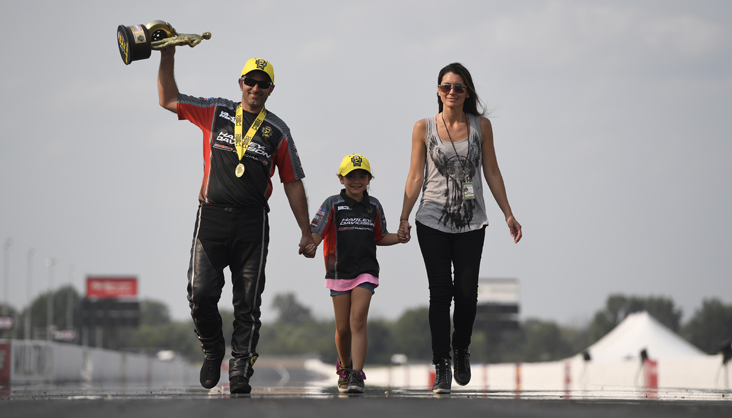 All but one of Krawiec’s early exits this season (three second-round defeats and one first-round loss) happened while on the new chassis that the Harley-Davidson team debuted in Englishtown and scrapped after Brainerd. Beginning at the Chevrolet Performance U.S. Nationals, Krawiec has been on an absolute tear. He has won four times in five tries, with the aforementioned loss coming against Tonglet.

So, that brings us to the upcoming event in Las Vegas. For Krawiec to mathematically clinch a championship, he needs to lead Tonglet by 192 points when we leave The Strip at Las Vegas Motor Speedway on Sunday night. To do that, he’ll need to win the race while qualifying near the top of the pack.

Instead of unpacking all the possible scenarios, let’s keep this relatively simple. At the AAA Texas NHRA FallNationals, Krawiec earned 128 points, and Tonglet picked up just 37 points. That’s two points below the maximum and six points above the minimum (assuming Tonglet qualifies, which I am because this is my column and I can do what I want). If history repeats itself, Krawiec will leave Las Vegas with a 198-point lead and a freshly minted Pro Stock Motorcycle championship. 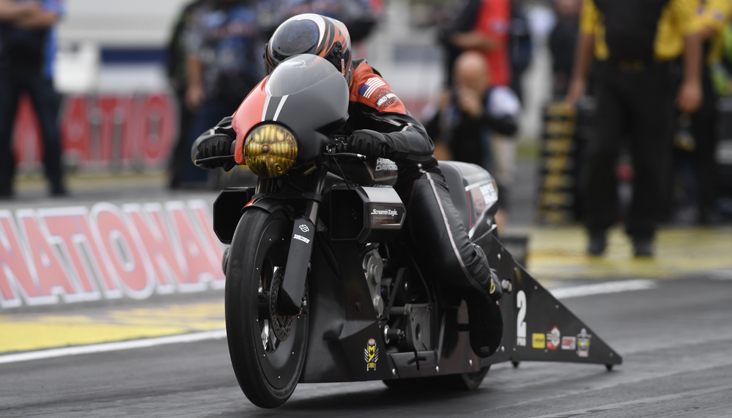 Of course, that’s what Krawiec needs to do to clinch in Las Vegas. If he leaves with a 161-point lead, he’ll have a title locked up by qualifying in Pomona. So, if Tonglet loses in the first or second round (as he has six times this season), and Krawiec wins the race, the Harley-Davidson rider will be in fine shape. Betting on Tonglet exiting early two races in a row seems like a poor move to me, but I’m not much of a gambler.

The Nitro Fish rider can make this title fight very interesting if Krawiec has an uncharacteristically bad weekend. Tonglet can, at most, pick up 99 points on Krawiec if the 2010 champ maxes out on points, and the three-time champion only earns the bare minimum. That would cut the deficit to eight points with one race to go.

These scenarios obviously call for extremes, like we saw in Dallas. If the two riders pick up the same number of points in Las Vegas they’ve averaged during the Countdown (106 a race for Krawiec and 74 for Tonglet), the Harley-Davidson racer will hold a 139-point lead as we head to Pomona. A championship might not be clinched at The Strip, but a lot about the Pro Stock Motorcycle championship will be decided by the time the NHRA tour leaves town Oct. 30.