Behind the Numbers: Consistency has Todd off to the races

J.R. Todd has the best reaction time average in the Funny Car class and one of the most consistent cars. That combination has helped him to a great start in his second season behind the wheel of the DHL Toyota Camry.
25 Apr 2018
Jacob Sundstrom, NHRA National Dragster Associate Editor
Behind the Numbers

Earning two wins in five races means something beyond the 100 points awarded to the racer that hoists the Wally in the winner’s circle. Wins are something of a status symbol in NHRA Drag Racing, something to point to as the season chugs to its inevitable conclusion at the Auto Club NHRA Finals in Pomona. The more a racer piles up, the better their résumé looks as the Countdown to the Championship approaches.

Those early-season wins started to ring hollow after late-season heroics won the day in 2017. Ron Capps and Steve Torrence won the most races in the Funny Car and Top Fuel classes, respectively, a season ago and didn’t take home the world championship because their playoff performance wasn’t up to snuff. But one season should not make a narrative; Capps did all his winning before the Countdown to the Championship in 2016 and rode a high of round-wins (but no race wins) in the playoffs to take home his first world championship.

All this (finally) brings me to J.R. Todd: the driver of the DHL Toyota Camry. Scott Kalitta’s Car. That’s a Funny Car with more legacy than perhaps any other in the sport; certainly, than any other still on the track. Todd won back-to-back races in a Funny Car for the first time in his short tenure behind the wheel of a flopper, in part thanks to his excellent driving and in part due to the deadly consistent tune-up of crew chiefs Jon Oberhofer and Todd Smith. 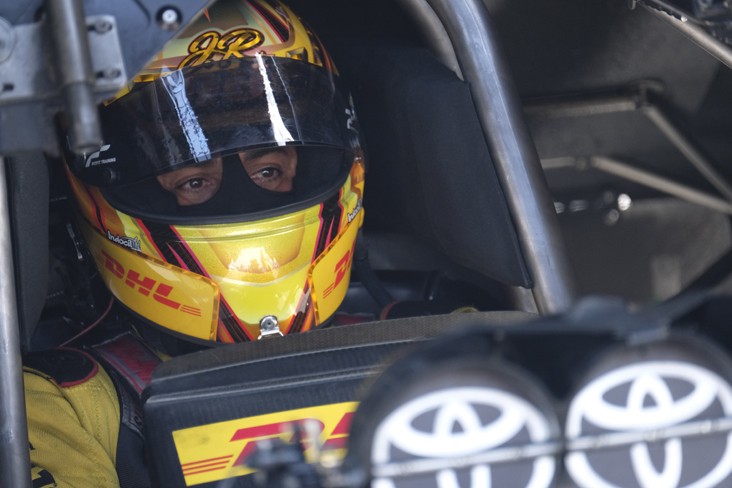 The Yella Fellas don’t throw down with the quick kids on Friday night. The career high for Todd in a Funny Car is a very respectable 3.865. That’s nowhere near the Funny Car record 3.793 laid down by Robert Hight, but it’s plenty quick. Todd ran that in 2017. His quickest pass in 2018 is a 3.908, and his average hit, including only runs quicker than 4 seconds, is 3.96. This team isn’t setting track records while collecting Wallys, but they are doing one thing better than almost anyone else: getting down the racetrack.

Exiting the NHRA SpringNationals, 50 percent of Todd’s runs are quicker than 4 seconds. That’s significant for two reasons: First, only one full-time racer has a better percentage (Matt Hagan, 54.5 percent) and second, the average for the field is 29.7. So, while the DHL car is by no means the quickest on the property, it’s one of the most consistent. That should sound familiar.

That’s because Capps and crew chief Rahn Tobler did nearly the exact same thing over the last two years. In 2017, they got down the track 57.1 percent of the time with a 3.917 elapsed time average. You only need to check the trophy case at the Don Schumacher Racing shop to see how that worked out. Their formula hasn’t changed much this year, but the switch to the six-disc clutch has likely made them slightly less effective than they were in the past.

Which is why it’s fair to note that this is just how things stand through five races. Yes, the DHL car hasn’t been all that quick and many Funny Cars have struggled with overall effectiveness but all of that can change. It’s easy to think of this sport as stagnant when it’s one of the most dynamic on the planet: that’s what makes it so great. Here’s one more thing, and this probably won’t change: Todd has the best reaction time in the Funny Car category (.062). That’s an advantage Kalitta Motorsports has no matter what it does with its flopper.

The bottom line is that the more quick, consistent cars that are fielded, the better the sport is. Todd’s success is a great story for an immensely talented driver. Now, we wait to see who catches up to the Yella Fellas first.