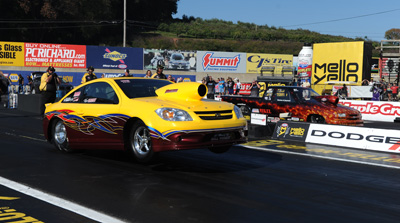 Four years after he made his last competitive run in the Pro Stock car and more than two decades after he left the Comp class, Tom Martino returned to take care of some unfinished business. Martino has five Pro Stock wins as a driver and many more victories as an engine builder, but he’d never won an NHRA national event in Comp. That changed when he wheeled Ken Voight’s Super Modified Cobalt to a win at the Dodge NHRA Nationals in Reading.

“This is pretty cool,” said Martino, after stopping Scott Benham in the final round. “I never won a [national event] in Comp before but it really didn’t bother me. I was runner-up a few times including twice at Indy. I just didn’t race in the classes that you needed to win. I had the fastest B/Altered and C/Altered in the country but it was hard to win with those cars.”

Martino last raced in Pro Stock at the inaugural Epping event in 2013 when he wheeled partner Bob Benza’s car. Since then, he’s spent most of his time building engines for a wide variety of drag racing and circle track customers. His relationship with the father-son Comp team of Ken and Kenny Voight led to his appearance in Reading.

“The Voight’s have been good customers for a couple of years and their car runs very well,” said Martino. “I like to think we turned their program around power-wise. That being said, there is more to racing the car than just going fast. We were having some issues with the car not making consistent runs and not going straight. Ken asked me if I wanted to drive. At first, I thought he was joking. Then he told me to sit in the driver’s seat and see if we needed to make some changes. I said, ‘You were serious?’ Next thing I know, he’s got 186, my competition number, on the windows.”

It’s ironic that Martino’s return to Comp came at Maple Grove Raceway since that was the site of his last Comp race 22-years earlier. At that event, he became frustrated when his index got hit and decided to move to Pro Stock the following year. From 1996 to 2002, Martino was a full-time pro who logged multiple top ten finishes and was a charter member of the Speed Pro 200-mph Pro Stock Club.

“When I ran my last Comp race here in 1995 that’s the last time I saw a full Christmas Tree,” said Martino. “I was racing in B/Altered and C/Altered and both indexes got hit. I’d been begging Tommy [Kling, former crew chief] to race Pro Stock so we gave it a shot.” 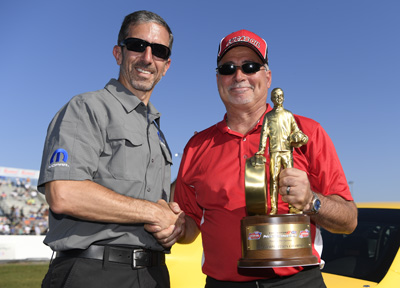 Once he arrived in Reading, it was not exactly smooth sailing but after three runs, Martino managed to run .65-second under the H/Altered index and qualify No. 9. The team, including the Voight’s and crew members Rick Rollinson and Bill Ursini, steadily picked away at the combination until their car became one of the quickest in the deep 27-car field.

“The car shut off on the first run because we had an issue with some new carburetors,” Martino said. “I came home [to New Jersey] and got some stuff to work on the carbs. Then, I almost hit the wall and ran .65-under but be moved some weight around and the car was pretty good after that. I took 11 [hundredths in CIC penalties] in the second round but I still felt like I had plenty left, even for the final.”

Martino had his only bad light of the event in the final with a .104, but opponent Scott Benham was also late with a .134. A (-.526) 8.684 was enough for Martino to claim his first Wally since defeating Erica Enders in the Pro Stock final at the 2006 Gatornationals.

“The final was a mess,” Martino laughed. “I put it in fifth gear and looked over and when I did, I turned the wheel and it made the car move over on the track. That was pure driver error. On the starting line, I made another mistake. I was sweating so bad that it got in my eyes. I saw the first amber light come on, then I got a big drop of sweat in my eye. I blinked and the last bulb was on. That’s just where I let the clutch out. I think Scott had the same problem. I’m not usually that late and neither is he. I actually think I did pretty well for someone who hadn’t been on a full Tree for so long. And, I wasn’t using a blinder.”

Buoyed by his success, Martino will likely not wait another three years to return to the seat of a race car. There is a possibility that he will race Voight’s car again next year, and he’s also preparing a B/Altered for an engine customer.

“I really enjoy it whenever one of my customers runs well and wins a race but I can’t lie; I’d still rather be the one doing the driving,” Martino said. “I could see myself running three or four races next year, maybe a few more if everything works out. The one thing I always felt like I could do is drive. I think I can still do it, too.” 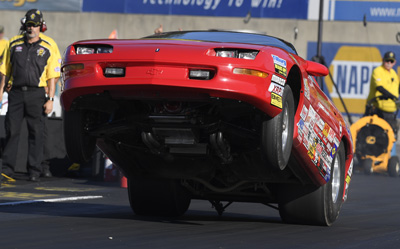 The best of the rest: One week after a disappointing final round loss in Charlotte, Byron Worner returned to his home track at Maple Grove Raceway and wheeled his Camaro to the final round. Given a second chance at a victory, Worner, the 2013 national champion, didn’t let it go to waste with an almost perfect performance in the final against 2002 world champ Anthony Bertozzi. Worner left with a .008 light and lit up the scoreboard with a 9.863 on his 9.85 dial for the win after Bertozzi broke out. It was Worner’s second win of the season following his win earlier in Epping. Worner, who is also the 2015 Reading champ, drove past Wendy Caliendo, Russ Linke, and Mike Letellier to reach the final round.

Karl Martel’s A/SA ’69 Camaro is one of the cleanest and most competitive race cars in Stock Eliminator and it carried the Dover, Del., resident to his first NHRA national event victory. Martel faced off against Lenny Williams’ Oldsmobile in the final and earned the title with a .015 light and a 10.262 on his 10.24 dial. For good measure, Martel also thrilled the Reading fans with a sky-high wheelstand. Martel had a bye-run in the semifinal round but he also had a clear a couple of tough hurdles against past world champions Tex Miller and Lee Zane. Earlier this season, Martel warmed up for the Dodge NHRA Nationals by reaching the quarterfinals round of the track’s Lucas Oil Drag Racing Series event. 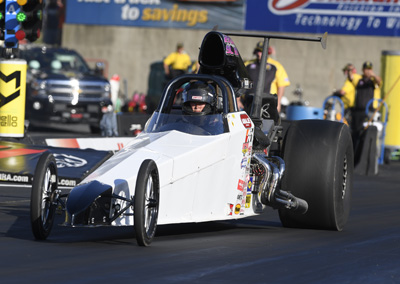 Having had success in the Top Dragster class, Lauren Freer has admittedly not spent much time focusing on Super Comp racing lately, but that didn’t stop her from winning her fourth career national event and third n the 8.90 division. A radiation therapist by day, Freer got the best of Jeff Kundratic in the double-breakout final, 8.889 to 8.869. Kundratic was quicker off the starting line with a .009 to .022 reaction time advantage. Freer did not have an easy path to the final round with tough races against Amanda Boicesco and former Super Stock national champion Anthony Bertozzi. Amazingly, the Reading event marked the first time this season that Freer has competed in Super Comp at an NHRA event.

Kevin Robb, who lives within walking distance of Maple Grove Raceway, won his second national event title of the year and the fourth of his career when he drove to the Super Gas victory. Robb, who also won the Super Comp title at Englishtown, won the double breakout final round against Ray Sawyer with a 9.899. A round earlier, Robb prevented a rare father-son final when he downed Mike Sawyer, who also broke out. With the win, Robb still has an outside shot at a top ten finish in Super Gas. He’s also in line for a top ten in Super Comp.