One down, one to go

Justin Lamb uses a late-season rally to clinch the national championships in Super Stock and after a Las Vegas win, he’s closing in on the Stock title as well
01 Nov 2017
Kevin McKenna, NHRA National Dragster Senior Editor
The Sports Report 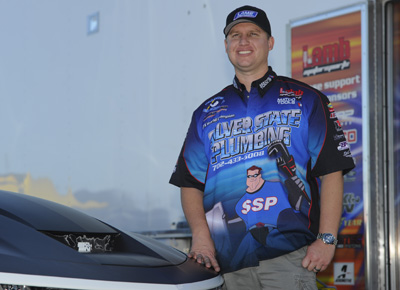 Justin Lamb locked up the national championship in Super Stock a couple of weeks ago and he’s on the verge of adding the Stock title after a dominating win at last weekend’s Toyota NHRA Nationals in Las Vegas.

Lamb drove his new Redback Boots COPO Camaro to a final round win over Randi Lynn Shipp’s wheelstanding Firebird in the final round. That pushed his points total in Stock to a robust 678 points and with just one divisional and one national event left in the season, odds are that Lamb will be giving two speeches at the NHRA Lucas Oil Series champions’ banquet in Hollywood in two weeks.

“As soon as we got this [new COPO Camaro], we changed of things to essentially do it our way but it has been great right out of the box,” Lamb said. “We were fortunate to win a bunch of rounds and hopefully we can hold on to win another championship.”

Lamb’s last remaining challenge for the Stock title will come from Division 4 racers Brett Candies, Jeff Lopez. Jimmy Hidalgo, and Jerry Emmons, who would each have to reach the late rounds of the two remaining events in the season, the final Division 7 Lucas Oil Series race in Las Vegas and the Auto Club Finals in Pomona. Lamb can also better his score at both events, although it will take at least a final round appearance to do so.

“We’ll be back here next week to see what happens,” Lamb said. “I’d like to wrap this up as quickly as possible. The first two championships I won, I had to come from behind and win them late in the season. I didn’t have that stress this year in Super Stock and hopefully, the deal in Stock will fall together quickly.” 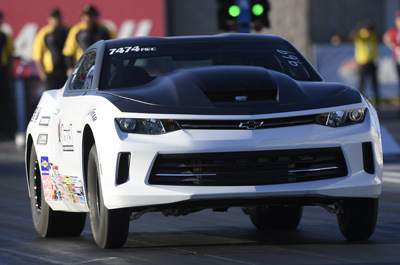 Lamb has now appeared in 28 national event finals and he’s turned on the win light in 18 of them. With a strong possibility that he’ll have four national championships in the bank since 2013, plus national event wins in six different classes, Lamb has quickly established himself as one of the best racers in the Lucas Oil Drag Racing Series. Admittedly, he could race more often and potentially win more events, but he prefers a balanced lifestyle that places family and business first.

“Don’t get me wrong; I love racing,” he says. “But I won’t sacrifice my family or my job to do it. This year is a prime example. I wasn’t really planning to chase points but after I won the Sonoma divisional and came back and was runner-up in the national event a week later, I decided to go race in some more points meets. Normally, I wouldn’t have done that but these [championships] aren’t easy to win and whenever you’ve got a shot at one, it’s worth pursuing.”

The best of the rest: Greg Kamplain made the long trip from Indiana to Las Vegas pay off when he drove to the win in Comp Eliminator. Kamplain won his seventh career national event title by driving his B/Econo Dragster to a final round win against Tom Mettler’s PST ’01 Dakota truck. Kamplain was able to ease to the win after Mettler fouled by just two-thousandths of a second in the final. Kamplain made it to the final by posting wins against Mitch Withers, Joe Mozeris, and Ryan Warter. He lost just four-hundredths to CIC violations along the way. With the win, Kamplain has all but locked-up a spot in the top ten.

Ryan McClanahan is also a seven-time national event champion following his win in Super Stock. McClanahan, the 2010 Super Stock national champion, won in his SS/BM Cobalt after final round opponent Darrell Dietz fouled in his FSS/C Cobra Jet Mustang. McClanahan began the season with three-straight round one losses, but has come on strong lately with a win at the Salt Lake City divisional event and the Toyota NHRA Nationals. McClanahan, one of nine former national champions in the Super Stock field, topped Darren Smith and Irvin Johns before earning a bye run into the final. McClanahan currently sits No. 12 in the points standings and can still earn points at the final two events of the season. 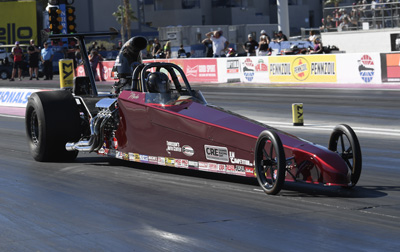 After runner-up finishes earlier this season at the Phoenix national event and the Division 7 race in Salt Lake City, Marko Perivolaris earned the win in Super Comp when he defeated Mark Potts in the final round. Racing on a 9.05 index, Perivolaris drove to a 9.062 to defated Potts’ 9.080. Perivolaris, who won his first national event title in Super Gas at the Pomona event in 2015, defeated Tommy Phillips, Chad Langdon, Rich Lash, Ken Mostowich, and Mike Shannon before a bye run in the semifinals. While he can’t win the national championship, Perivolaris is now ranked No. 5 in Super Comp and he’s got an outside shot at a top ten finish in Super Gas.

Val Torres opened eliminations in Super Gas with a perfect 10.050 on the 10.05 altitude-adjusted index and he eventually made his way to the final where he coasted to the win after Tanner Hiatt fouled by two-thousandths of a second. Torres was solid through eliminations with another 10.057 run in his round three win against Bradley Johnson and a 10.061 to 10.077 victory against Super Comp champ Perivolaris in the fourth round.