Eight is not enough

Once again, the JEGS Allstars provided a perfect showcase for the best drivers in the NHRA Lucas Oil Series and the Division 3 team took him the title for the eighth time
19 Jul 2017
Kevin McKenna, NHRA National Dragster Senior Editor
The Sports Report 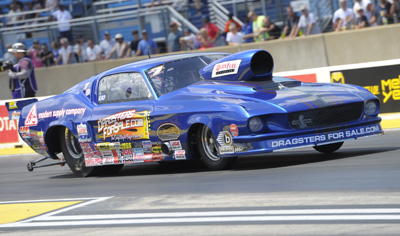 There may be no such thing as a perfect race, but even if that’s the case, the JEGS Allstars event, heled each year at Route 66 Raceway, certainly comes close. Each year, 80 of the best racers in the NHRA Lucas Oil Drag Racing Series earn exclusive invites to Chicago in order to compete in the prestigious event. Team spirit is the order of the day as drivers from NHRA’s seven geographic divisions battle tooth and nail for a $20,000 top prize.

This year, the host team from Division 3 pulled away from the pack late to earn the overall team title. It was the eighth time in the last 33 years that the D3 squad has earned the title and it was the first for new Division 3 Director Jeff Conley.

“How’s this for a nice welcome gift from the D3 racers?” said Conley, staring at the perpetual JEGS Allstars trophy that will now reside in his office for (at least) the next 12 months. “Coming into this race, I knew we had a good team but every team is good. You have to beat the best of the best in order to get this done.”

There were three racers who helped to carry the Division 3 team including Comp champ Brian Browell, Stock winner Andrew Hill, and Top Sportsman winner Mark McDonald, who went a step further on Sunday when he also won the Fallen Patriots NHRA Route 66 Nationals title. The battle for the overall title was close after the first two rounds with at least four teams still in the running but when D3 went a perfect three-for-three in final rounds, it sealed the deal.

In many ways, McDonald was the star of the show, not just because he chipped in with three important round wins in Top Sportsman, but because he returned the next day to finish the job with his second win of the weekend. In a class where drivers are forced to bracket race at more than 200-mph, that sort of consistency is extremely admirable. 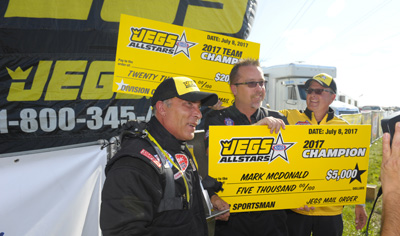 “This is unbelievable,” said McDonald, who was part of the 29th Allstars double. “We’ve had a stellar couple of rounds and I’m really happy. We struggled a little this Spring but we’re coming around. It’s been a good weekend.”

The Dragsters for Sale Mustang that McDonald drives was built by Charlie Evans Race Cars and it’s powered by an engine from Phil Oakley. The car was rebuilt after a crash three years ago and McDonald finished No. 7 in last year’s Top Sportsman points battle.

In the Allstars final, McDonald took on Division 5 rep J.J. Heber, who fouled. McDonald earned $5,000 for the win but more importantly, his victory sealed the deal to five the Division 3, earning the $20,000 bonus for its members. McDonald admitted that he wasn’t aware that his win would decide the title.

“I know J.J. very well,” said McDonald. “We share some technical stuff. He was last year’s [JEGS Allstars] champion and finished ninth in the world. He’s a tough competitor. We were kind of keyed up for him. It’s crazy because I can’t hit the tree for nothing this weekend. I haven’t had a great weekend but this is fantastic.” 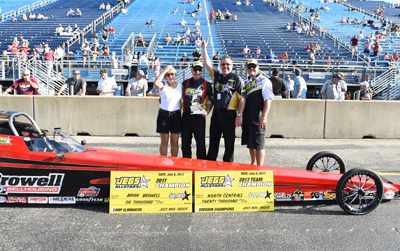 Comp winner Browell admittedly caught a break in round one after Division 7 rep Doug Lambeck broke. He also got a free pass in the semi’s after reigning national champion Doug Doll Jr. fouled. Browell entered the final with his index intact and even the thought of a permanent CIC penalty wasn’t enough to make him consider lifting off the throttle. Browell was .04-second behind opponent Brian Hyerstay in the final, but won with a stunning (-.704) 7.136 from his six-cylinder powered D/Dragster. Like Hill and McDonald, Browell’s 300 points was crucial to the overall team victory for the Division 3 team.

“It doesn’t get any better than this,” said Browell, whose custom bellhousings are used by many NHRA racers. “We built this motor specifically for this weekend and it worked out. That doesn’t happen all the time. We struggled during qualifying and it just all came together this morning. In the final, I was not lifting. We were going for it until the end.” 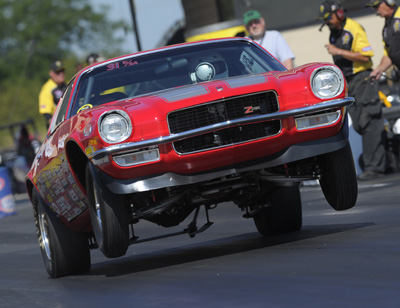 Stock champion Andrew Hill shared Browell’s sentiments regarding the importance of the JEGS Allstars event, which is now in its 33rd year. Hill wheeled his C/SA ’70 Camaro past Division 5 racer Darrell Goheen and Division 1 champ Justin Picillo in order to reach the final. Facing Division 7 ace Tibor Kadar in what was arguably the biggest round of his life, Hill did not disappoint with a .008 light. At the finish line, Hill broke out by three-thousandths, but tripped the win light because Kadar was .020-second under his dial in his vintage A/SA ’64 Thunderbolt.

“This is indescribable,” Hill noted. “I didn’t qualify for this race until the very last minute. I did well in the points last season and then we went to Indy for the first race and it got rained out. Then we went to Norwalk and went four rounds to seal it. I was excited just to qualify for this event. It’s the coolest think I’ve done in racing for sure.

“When I was rolling up [onto the return road] after the final, I heard we won the team championship,” said Hill. “That was icing on the cake. It’s great to keep the trophy at home.”