Behind the Numbers: Millican and Grubnic have taken a massive step forward

Clay Millican and David Grubnic have stepped up the performance of the Parts Plus / Great Clips dragster recently, and it's showing up on scoreboards across the NHRA Drag Racing landscape.
05 Oct 2017
Jacob Sundstrom, NHRA National Dragster Associate Editor
Behind the Numbers

Clay Millican reset the national elapsed time record by nearly a hundredth of a second, the latest salvo (pow-pow) fired by crew chief David Grubnic as the Parts Plus/Great Clips-backed dragster continues to light up scoreboards wherever it goes. This recent string of incredible runs has helped rewrite the record book: Millican now owns five of the top-10 elapsed times in Top Fuel history. That’s staggering.

When he ran a 3.631-second pass, he bested his previous career high by .024-second. This performance didn’t exactly come from nowhere, but Grubnic found something (what, exactly, the Australian wisely won’t share), and it shows. His first run in the 3.6s came in Brainerd in 2016, a year after the barrier was first broken by Antron Brown.

Since then, Millican has made 11 total passes in the 3.6s that average 3.675. He made three in 2016 (one each in Brainerd, Indy, and Las Vegas) and has already completed 11 in 2017, starting with the Brainerd event. Five of those have gotten him in the record books. That’s how much time Millican has picked up in relatively short order. The chart below includes all the Tennessean’s runs quicker than four seconds since 2016. 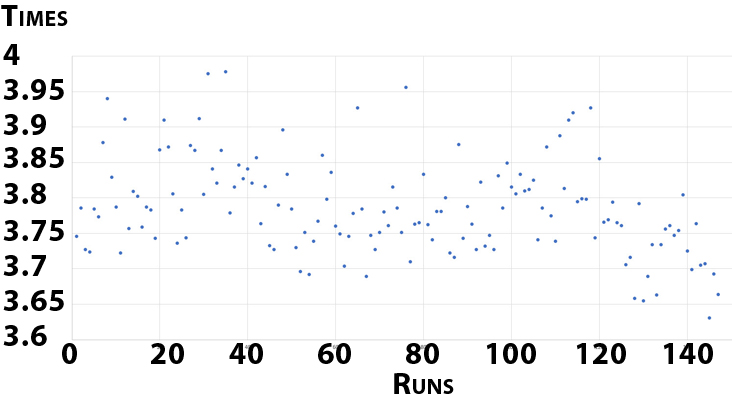 That sharp dip is the 2017 Brainerd event. Millican’s average elapsed time on runs quicker than four seconds prior to that race: 3.799 (124 runs). Since then: 3.72 (19 runs). Let’s note two obvious caveats: First, the ginormous difference in sample size. Second, the varying weather and track conditions that have helped Millican pick up a whole bunch of performance in recent weeks.

If you compare his recent stretch (Aug. 18 through Oct. 1) with the same stretch a year ago, you’ll get a similarly jaw-dropping improvement in performance. Millican averaged a 3.764-second elapsed time on 14 runs during the same period during 2016 — a nearly .05-second improvement over the course of a season. That’s getting it.

One thing Millican and Grubnic haven’t found yet is consistency. While they have the quickest car in Top Fuel, they’re also prone to kicking the tires loose during eliminations. That’s kept Millican from charging up the standings at the pace Grubnic would like. His 205 points earned during the Countdown to the Championship are the fourth-most of any Top Fuel driver, but he has only moved up two spots, to fifth place. 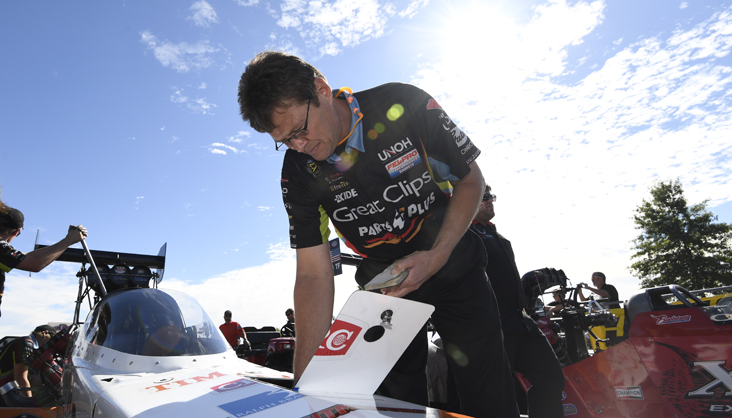 That’s despite qualifying No. 1 in the second and third race. Second-round defeats in Reading and St. Louis stopped Millican from climbing the ladder. In Reading, Millican dropped cylinders right at the hit against Brown, who holds a 23-2 record against him all time (and you thought Steve-O had it bad). The Tennessean led at 330 feet but was behind at the eighth mile and pitched off the blower belt — it wasn’t a close race.

Millican went up in smoke right at the hit in St. Louis against upset-minded Dom Lagana, who laid down a 3.73 after beating the Tennessean at the Tree by .016-second. All Millican needed to do was run a 3.71 to reach the semi’s, but he wasn’t able to get back into the race after smoking the tires early. Let me put those two runs into a bigger perspective: Millican has made 42 eliminations runs, and 27 of those runs have been quicker than four seconds (64.3 percent). Compare that to Brown, who has made it down the track quicker than four seconds on 56 of his 65 attempts (86.2 percent).

So, the team has some work to do in that department. Being quick is phenomenal, but it needs to be paired with race-day consistency. When that comes (and it very likely will), Millican will be a championship contender. Being a Top Fuel national record holder isn’t a bad starting point, though.